How many years of blogging about pots and...

Alchemy of Clay First Edition LINK HERE came out Oct. 10, 2010.  After 195 postings I closed it Dec 2, 2012, mainly because I ran out of space on Blog for more photos. And I gave up WordPress because of photo limitations. 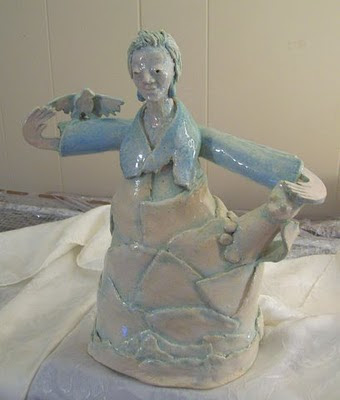 I been blogging not quite as many years as I've lived in North Carolina, namely eight.   So this year marks my 7th birthday as a blogger.  I'm also not mentioning the three other blogs to which I kind of contributed daily for several years.  Goodness, when did I find time to live?

Who really cares?  Me. I like having an independent source of my memoirs of blogs as well as pots.  Oh my goodness, there were so many chunky learning ones back then (pots, I'm obviously still chunky!)  And I found I could review a year's postings at the end of the year and actually delete the ones that were less than stellar. Now I think I was a bit heavy handed on the delete key last year, so this year I'll be a bit more careful.  Once deleted from blogland, things are gone.  But wait, I do still have those posts, because I send each one to an email address, and don't delete those ever.  Ah, double backups for saved files!

Stop using the past to poison your present. Don't let who you used to be prevent you from getting the things in life that are available to you now.

Posted by Barbara Rogers at 1:00 AM