My mother graduated from high school in 1934.  I remember her saying she went to some Catholic college for about a year, but don't know the name.  She didn't marry my dad until '39...so I don't know what she did during that time.  She did have a pen-pal.

It's interesting for me to remember writing letters to many people in my youth.  Sometimes you'd get assigned a pen-pal, who you didn't even know, that some group or another wanted to give young people a way to communicate across the world.

One of the few things my mother left me was her post card collection. Many of the cards are stored away somewhere, and I doubt that my kids or their kids will care about them.  I have scanned a few that at least had a note on the back indicating who wrote them from where.  They have no postmarks, so they may have been sent in envelopes with letters.

Hazel Autley wrote my mother on postcards, from Birmingham, England to San Antonio, Texas.  I think Hazel had probably been in school with my mother. There was a Hazel Pabst in her class, so perhaps she had married by 1937-8 when the cards were sent.

First let me share these three cards.  There will be more that I'll share in the future. After all these years, I only want to put a few up at a time. 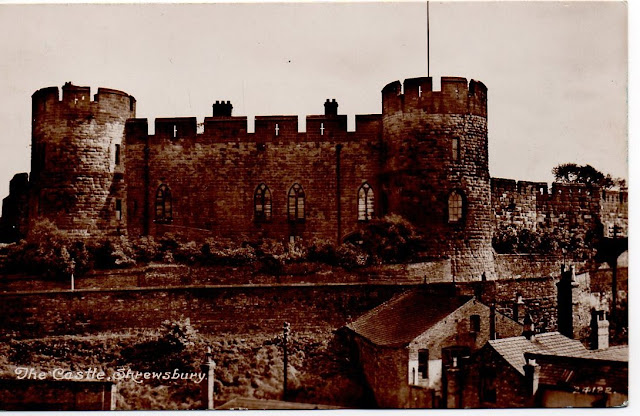 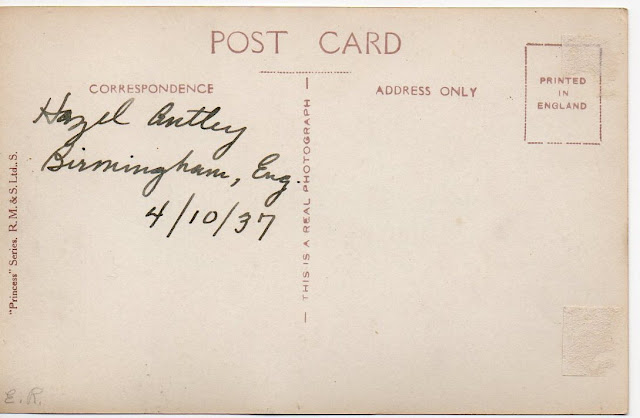 Mataley's note in her handwriting says this card was received April 10, 1937 from her friend Hazel Autley, living (I think) in Birmingham, Eng.

Shrewsbury Castle was built around 1074 by Roger de Montgomery[16]. Today the Castle is home to the Shropshire Regimental Museum, Shropshire, England.


History - The castle was built as a defensive fortification for the town, which was otherwise protected by the river. Town walls, of which little now remains, then radiated out from the castle and surrounded the town (although the area known now as Town Walls still has a small section of it and a tower known as Town Walls Tower and in the care of the National Trust).

In 1138, King Stephen successfully besieged the castle held by William FitzAlan for the Empress Maud during the period known as The Anarchy. The castle was also briefly held by Llywelyn ap Iorwerth, prince of Wales, in 1215. Little of this original physical structure remains.[2]

The Shropshire Horticultural Society purchased the castle from a private owner and gave it to the town in 1924. 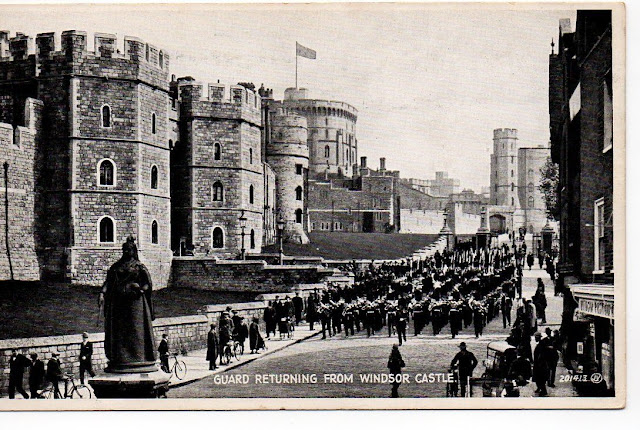 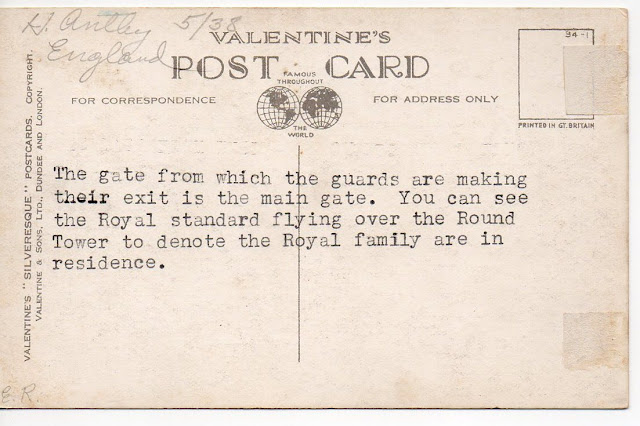 I think the typed note came from Hazel, with my mom's note saying it was now 5/38 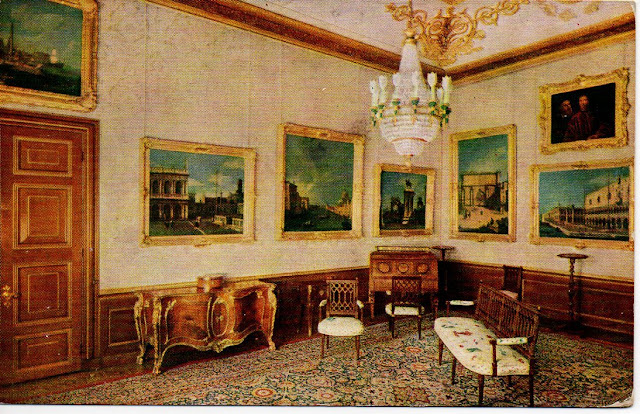 5/38 Postcard of Queen's Closet sent from Birmingham, England to my mother from her friend Hazel A. 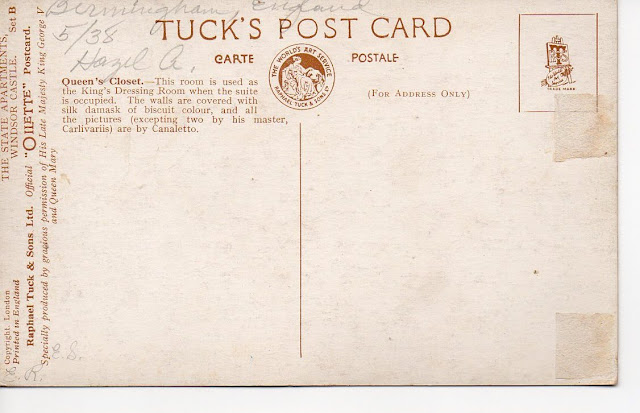 You may notice discoloration of two tabs on the back sides right of each one, which may have been from tape which was applied in a scrapbook in which they were afixed so the backs could still be seen.

I confess I know next to nothing about  Windsor Castle. There are many folks in Sepia Saturday who have more knowledge about it, and have probably even visited it.  Take a step over to see what the Sepia Saturday folks are up to this week.
I obviously wasn't able to follow their suggestion very well this week. 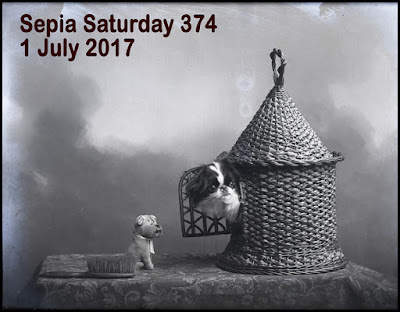 I used this resource and was overwhelmed!  https://en.wikipedia.org/wiki/Windsor_Castle

So I'll be satisfied just to share my mother's pen pal's contributions, and not attempt to learn too much about the castle itself.

Like a tree our growth depends upon our ability to soften, loosen, and shed boundaries and defenses we no longer need.
Madisyn Taylor on Daily Om

Posted by Barbara Rogers at 2:00 AM No comments:

Geese it's the last week of June already! 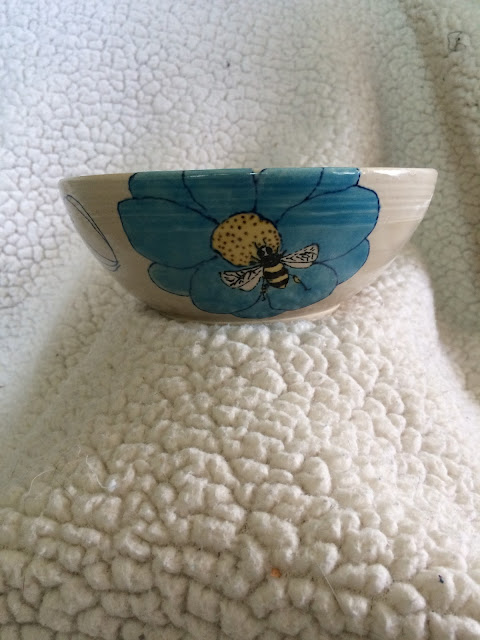 On June 25 last Sunday before church, the woman sitting in front of me asked if I'd be taking part in the holiday market at the Black Mountain Center for the Arts this December!

I said, oh my goddess (figuratively speaking of course) it's only 6 months till Christmas! The biggest gift giving day in our western culture. (also a big headache for retailers, who depend upon that income to get them through the next lean months, not counting Valentines, St. Patrick's Day and who gives gifts then? and Easter!)

I can't use this blog effective to sell things...though I share it on social media, but haven't got an etsy shop up at the present moment.

I'm not selling weekly this year.  I'm not even making that many things in clay what with the cough-from-hell-and-various-medications. 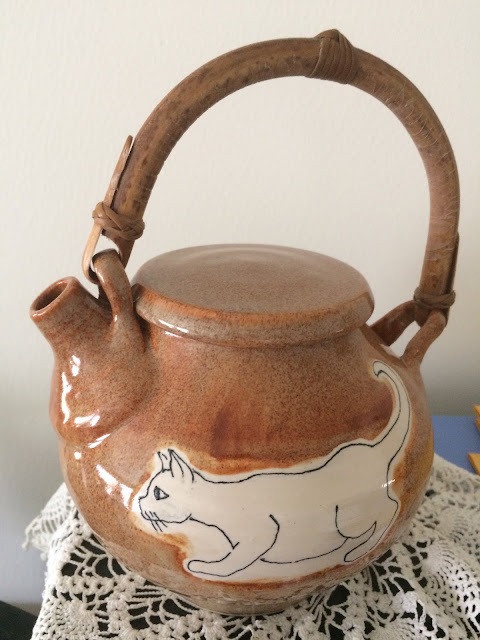 I'm just going to keep on doing what I love to do, making sculptural pieces, and occasional functional works...hoping that someone out there will like them.

I believe an artist's first loyalty is to creativity.  It is only second to the person who will share the insights and want to keep it with them.

Many people live their lives struggling against the current while others use the flow like a mighty wind. Madisyn Taylor in Daily Om

Posted by Barbara Rogers at 1:30 AM No comments:

Be proactive...in your health issues.  Try to eat right, get exercise, plenty of rest, have stress-free lives.

Then bam! Something out of the blue comes along, and there you are hospitalized for something you never gave a single thought to.

I had a relative who got dementia as a result of multiple strokes.

I worked with elderly people for ten years in either Assisted Living Facilities (ALF's) or Skilled Nursing Facilities or Nursing Home (SNF's).  Many were suffering from some forms of memory deprivation, and many from Alzheimer's Disease.

I recently re-watched, and saved Lisa Genova's TED talk HERE about How to Prevent Alzheimer's Disease.  This is one I can do!  And be warned, she doesn't just recommend keeping busy doing crossword puzzles.  It will take a bit more effort.

So I've returned to my Conversational Spanish class weekly.  And I'm working on some other new things that stimulate the building of new synapses in my brain...more exercise for the brain is definitely one of them! I'm also using a tool kit which I received when I studied counseling, where I learned methods of pain relief using our brains, where I learned self-hypnosis to deal with habits that are difficult to break, and where I re-learned the power of our brains in conjunction with our bodies...focusing on Whole-Being Health.

Thanks to a friend for recommending Reynolds Price's book from 1995, "A Whole New Life: An Illness and A Healing."

So I'm not perfect yet, but I'm committing myself to working on myself.  After all, if I don't nobody will!

Everything is energy and that’s all there is to it. Match the frequency of the reality you want and you cannot help but get that reality. It can be no other way. This is not philosophy.  This is physics.
Albert Einstein

Posted by Barbara Rogers at 1:30 AM No comments: