And just like that, it's springtime in the mountains!
All posts are copyright Barbara Rogers 2020.
Three Family Trees, is where my ancestors can still be found, as I find more about them.
And When I was 69, has notes of my life as an elder and historic photos and posts of historic interest.
Feel free to make comments at the end of a blog post!

Yesterday people started sharing music. I got into the swing, and chased some of my favorite pieces on YouTube. There was one choice of Yo Yo Ma which were "Greatest Hits" and I got 2 hours of lovely music. Here's the link, in case you also like his cello.

For me, I'm never finished with all I want to do in one day. There are so many projects I start and can't seem to finish.  They sit all over the apartment. I'm reading at least 3 books, one of which will be snatched back to the library system, and I'll put it on hold so I can download it again to read digitally. The books stacked about on shelves and tables remind me that I could read them as well!

Instead I planned to sit for a few moments in sunshine, embracing the moment. I picked up the mail, dropped the rent check in the dropbox, and came right back inside. The air had that acrid hot tar smell, from the road being repaired. Not to mention a high pollen count which I knew, but wished wouldn't bother my breathing. Oh well. I came back to enjoy my slice of pie for lunch with Yo Yo Ma. Why not? 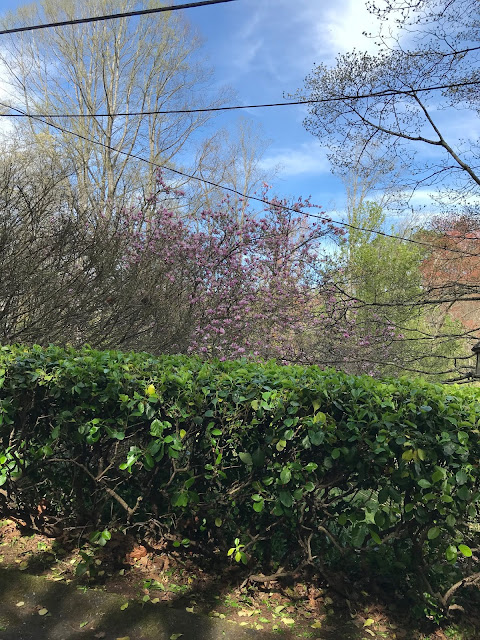 Posted by Barbara Rogers at 3:30 AM 9 comments: Links to this post

A message from the teacher

"Group,
"It's important to remember that clay is only a medium.  Coming to the studio is for self-expression and to be creative!  You must keep that going while we all wait for an end to this.  Write about being in the studio or make plans for when you return.  Use Pinterest to search for future inspiration.  Set aside the time you use for class or open studio, as your brain is already expecting you to use that time.  Try a new food, a new recipe, get outside, draw leaf patterns, look hard at the grass and branch systems of the trees you have.  Play music, play an instrument, sing often.  Coming to the studio is habitualized, make sure your brain gets what it needs, lots of water yes but more importantly, a healthy dose of the remarkable artist that I know all of you are.  This time will pass.  And it's important that you come through it mindful and stress free, ready to excel past where you left off, and leapfrog into a whole new chapter of clay and artistry.
"Charles Freeland
Studio Manager"

I was totally surprised and pleased at this message from our community clay studio manager/teacher.

Then I thought of how hard my hands are to return to using tools in carving or smoothing or painting. I've been through that before. So for this clay lover, I need to do more than just think about creating. If I'm going to return to clay, I've got to work my hands on tools.

I have a couple of projects that need attention. I'll let you know how it goes. Today I was pleased with myself in doing almost all my physical therapy exercises. I felt really good till about 5 pm, when I kept coughing and coughing. Oops. and there's a new ache in the old body, an ear ache! So now I'm using the nebulizer early and hope it will pull whatever's bothering out of my lungs and sinuses.

Posted by Barbara Rogers at 7:06 PM 8 comments: Links to this post

Getting ready for what's next

That is something that we can all give a bit of thought to.

Once things begin to open up again. When kids can again climb around on playgrounds, after being let out from classrooms where they gathered to learn...when the stores are stocked well and friends can hug again.

Did you ever think we'd be without such ordinary things?

I want to sit in my favorite coffee shop, eating a decadent pastry and sipping my Americano espresso. I want to hug everyone after church. I want to be in a crowded studio making something in clay, grinning at jokes being told.

My original guess (back when I started wearing a mask at the dentist office in February) was things would be changing and might last till Easter.  Now I'm not sure Mother's Day will suffice. I'm still on the optimistic side however.  Yet still, the flu epidemic of 1918-19 had a second bout come through after the survivors got well. More people got sick.  So we need to be wary.

OK, let's post Christmas as possibly returning to normal. What do you think?
Posted by Barbara Rogers at 10:30 AM 6 comments: Links to this post

Goals during the time of Covid-19

Do something I've been putting off.
Every day.

I wake up and think, this is what I'll tackle today.

Then I go divert myself on the computer, and the day is over, and maybe I've managed to do the tasks that a daily life requires, but seldom the "targeted and needed thing." However, I've cleaned out the aquarium, so 6 little beings are happier.

And I'll still be reading all my blog friend's posts, and commenting on them. That's what I like to do while I do my nebulizer treatment twice a day.

I also need diversions and not inspiration; kittens and puppies please. Seriously, I am having to skip those of you who post such beautiful sayings, poems, quotes, which I usually like. I will probably be back.

Bye from here, for now. 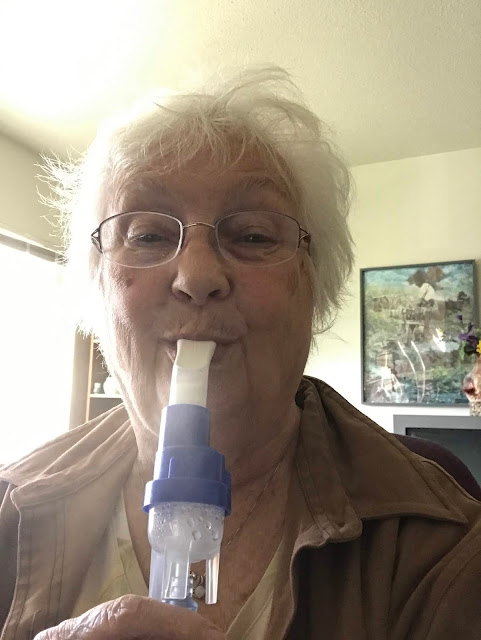 Posted by Barbara Rogers at 3:30 AM 4 comments: Links to this post

I wanted to make a teapot which would hold enough for a couple of mugs-worth, and maybe 4, in case friends wanted to share a pot.  Mugs are generally 10-12 oz.  So my goal was 40-48 oz. Yes, I made it, and it pours without a dribble (another potter's goal!) 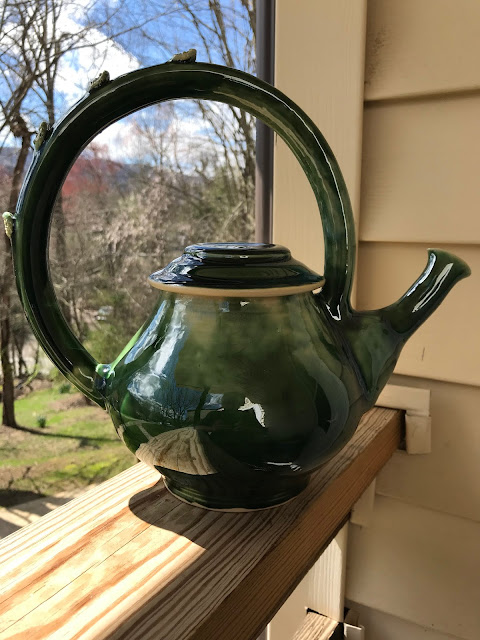 Glazed in shiny green with some areas of white sponged into it, it both has translucence over the white clay, as well as some interesting flows of color blending. Unfortunately, shiny glazes are really hard to photograph! 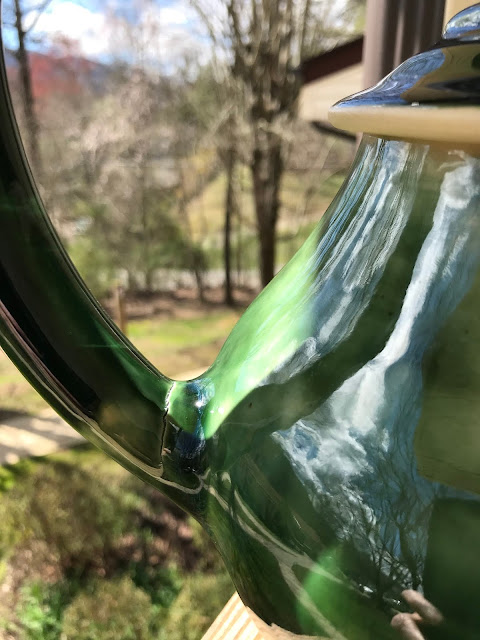 A little crack appeared by the handle (look closely at the white area.) It won't keep it from functioning, but alas, it makes it a second. 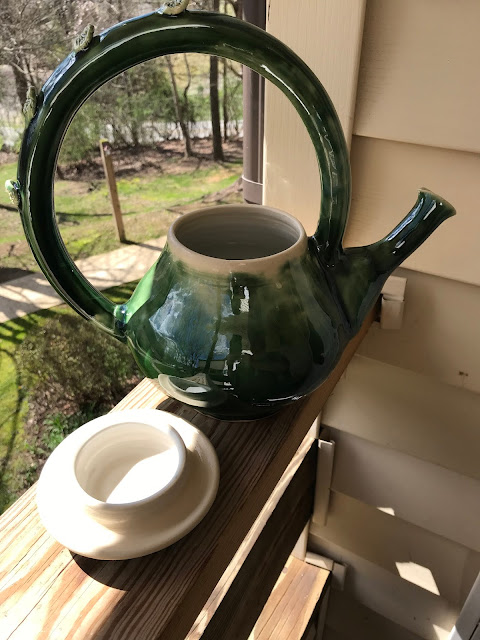 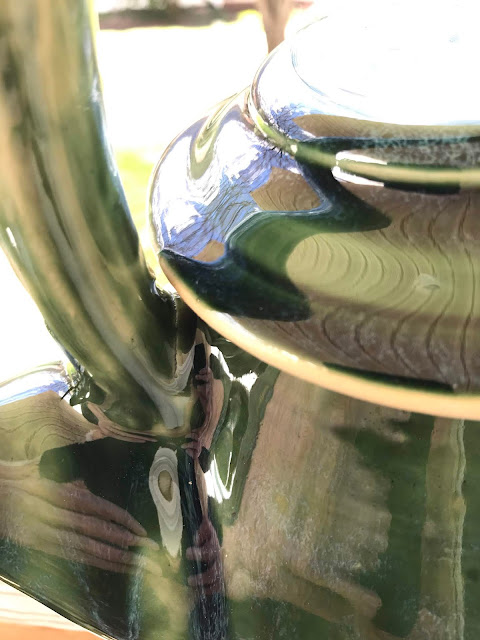 With all the reflected light, it's hard to see the other crack at the other end of the handle. These were in the finishing clay which were just coils to smooth the handle around the pot.

Sunlight below gives a bit of a chance to see the changing colors of these glazes. 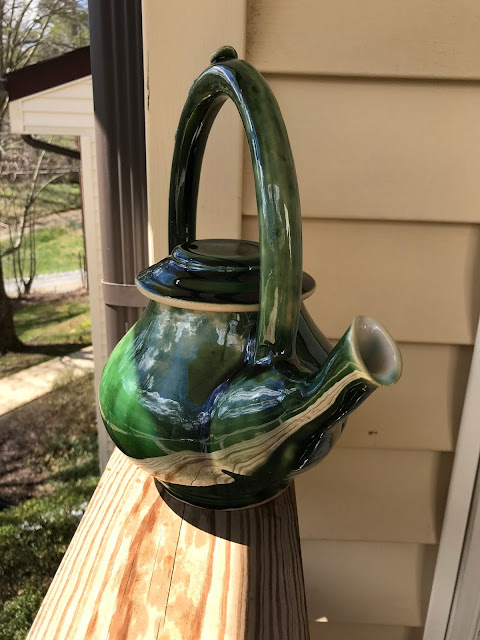 A bit of a tipsy spout, eh? The spout always does a bit of "unwind" from when it was thrown on the wheel, and I thought I'd corrected for that, by making its opening a bit skewed...but either that was the wrong direction or I didn't do it enough! 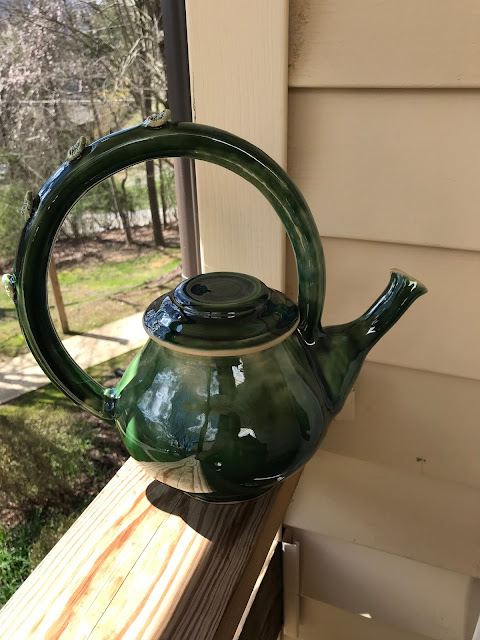 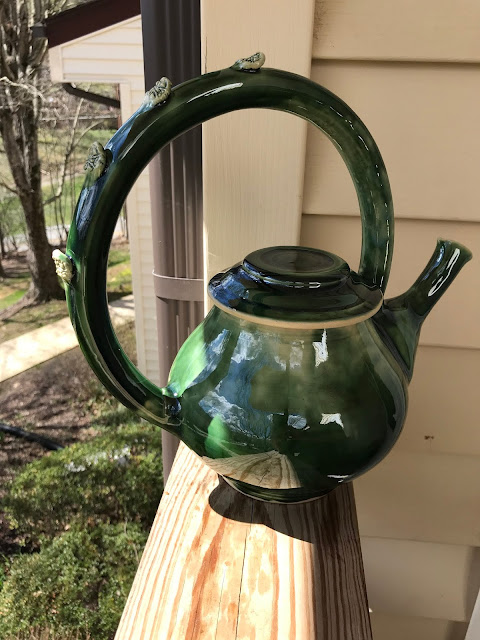 Maybe I'll try some indoor shots, but diffuse light may not work.

Posted by Barbara Rogers at 1:00 AM 5 comments: Links to this post 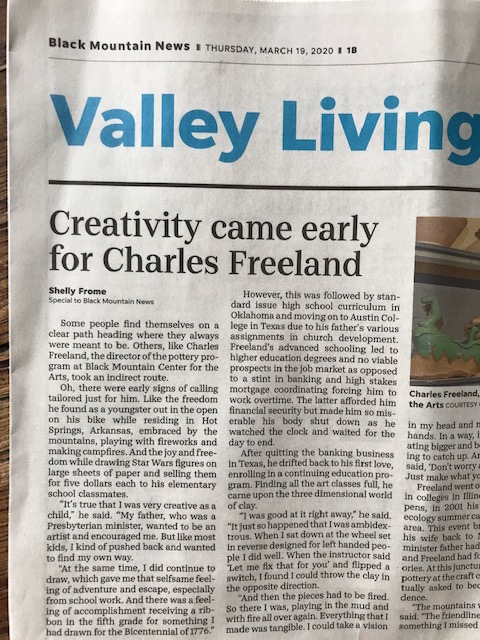 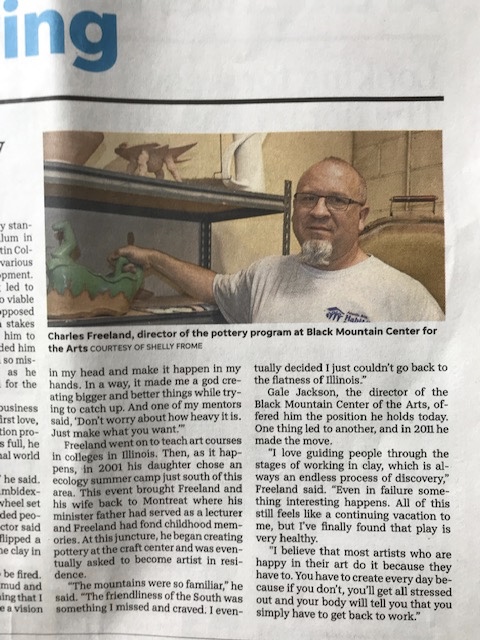 Charles is the studio manager at the Black Mountain Center for the Arts Clay studio.
Thanks to Shelly Frome for writing this vignette about him. Shelly is a friend who also writes biographies for the UU publication, Tidings, which I edit.
Posted by Barbara Rogers at 6:00 AM 3 comments: Links to this post

Exercise and the mountains 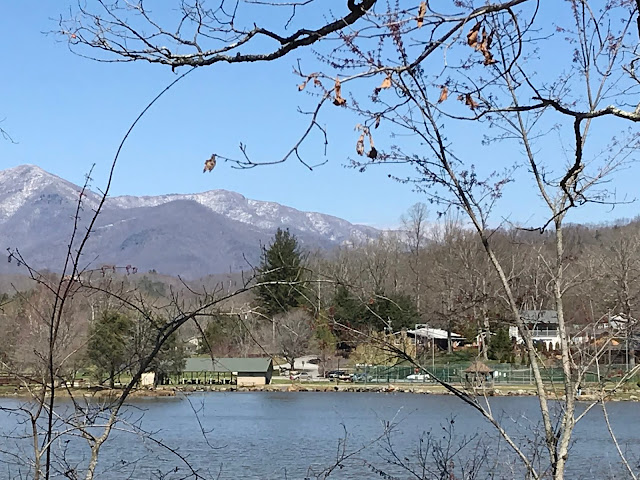 March 23, 2018. One of my favorite views of the Blue Ridge Mountains. At least I was walking around the lake at that time, I think. That's one of my goals for this week of isolation, to get walking again! With my chronic cough, I'll wear a mask just so people won't think I'm catching...and of course my breathing will be limiting me to walking a flat trail. I salute all those who can actually hike in these beautiful mountains. I just didn't move here until I was already incapacitated.
Posted by Barbara Rogers at 3:30 AM 3 comments: Links to this post