Also known as...
when you need a friend!
And I'm not soliciting any help to support any piscean adventures. 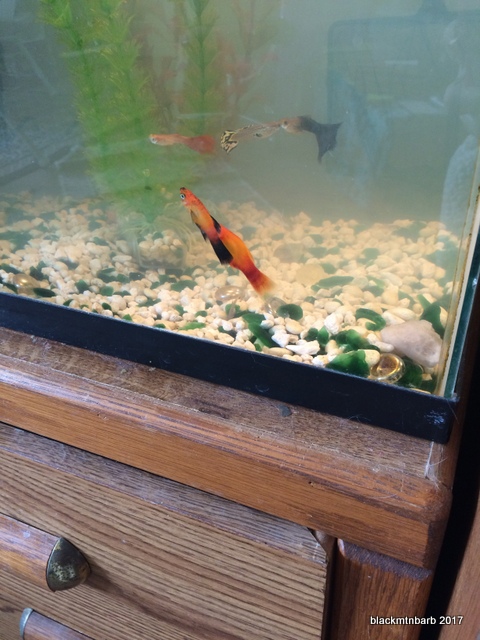 The last of their kinds...black tail is either a Molly or a Platy.

Goldie is either a Molly or a Platy. I forgot which one was which a long time ago, about when the other 3 of their kinds had disappeared.  Nope, no bodies.  Those guppies are not only cannibals, but well, they eat other fish besides their own kind...usually after they die. 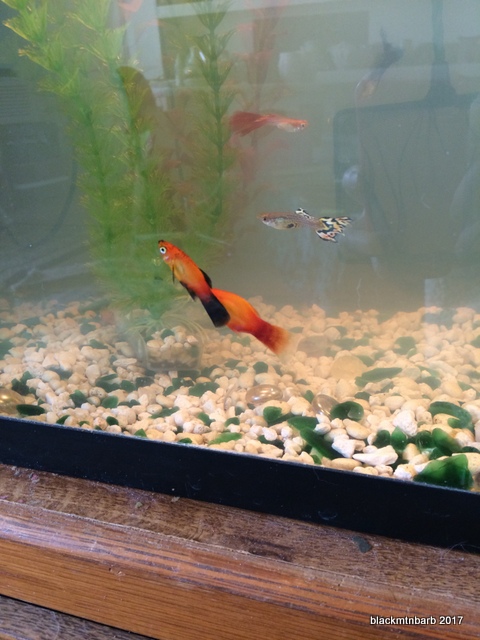 So black tail hasn't been doing so well.  And there was goldie helping her up to the top to get something to eat.  She just encouraged her, and kind of lifted her along the side. 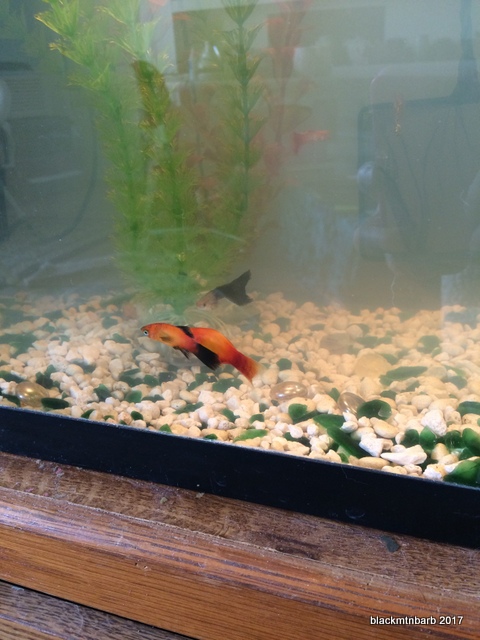 The guppy in the background was watching as well...would this be dinner tomorrow?

Nope, the next day black tail was doing much better.  She made it to the top on her own to eat breakfast.

I have a gazillion guppies, who are all sisters/brothers.  Only one mother seems to give birth, and I did a quarantine of babies for about 6 weeks so some of them might survive the hungry adults.  So now there are many more than anyone would want, and probably way beyond the population density for the 10 gallon tank.

But they are mainly boring little silver minnows, and I didn't get any of the markings of the pretty orange and black and speckled male dads...except a few black spotted tails.  I'd never make a good fish breeder, cause I respect all life, no matter how pretty or ugly!

Update note: Just today I found the black tailed orange fish wedged in a corner under a rock, with those glazed eyes.  So she was ceremonially flushed with wishes for a good life next round. Maybe I should go purchase another orange fish to keep the one survivor company...but with so many guppies, that really doesn't make much sense.  So she's now the lonely little goldfish among the minnows, so to speak.

When it becomes too cold to be outside with nature, bring her inside through your meditation. Madisyn Taylor
Posted by Barbara Rogers at 2:00 AM 1 comment: 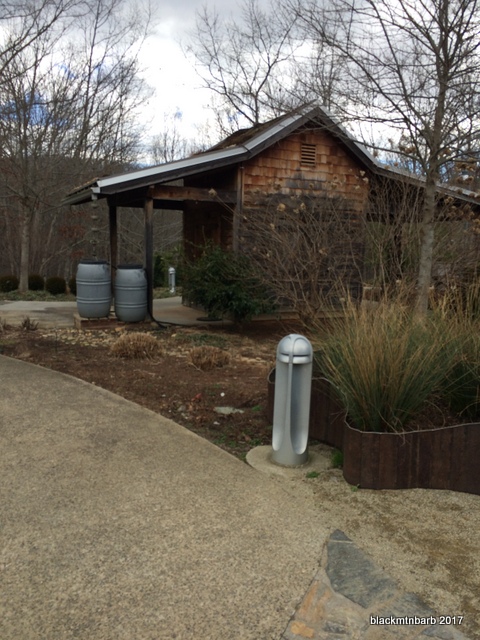 Yes there are plants growing up there on the roof, among the stones! 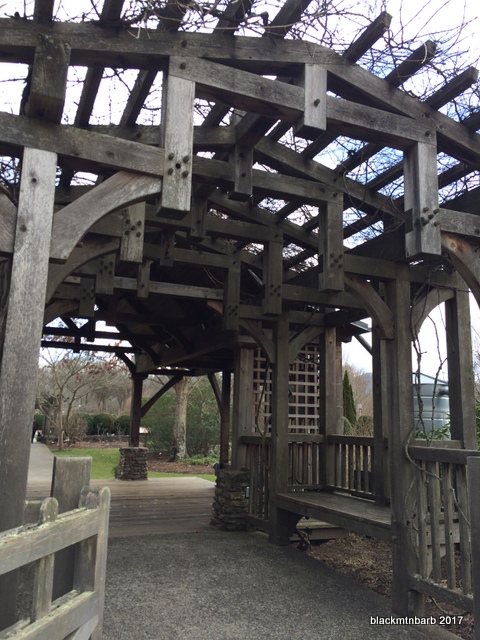 Quite a trellis, ready to hold a lot of vines...wonder what they are. 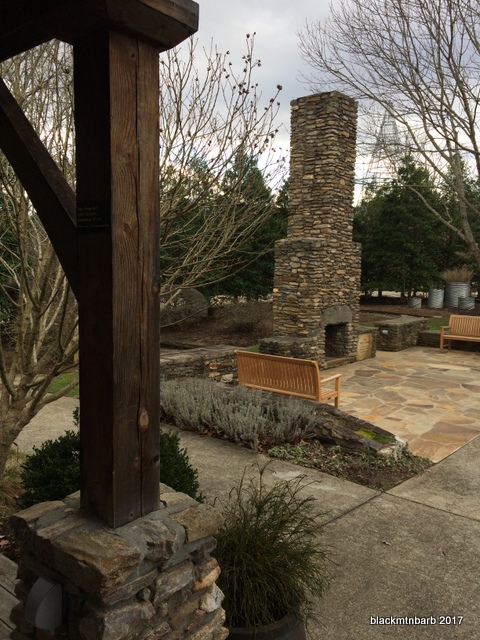 Stone fireplace and chimney, which harkens back to a lot of the cabins built in the mountains. 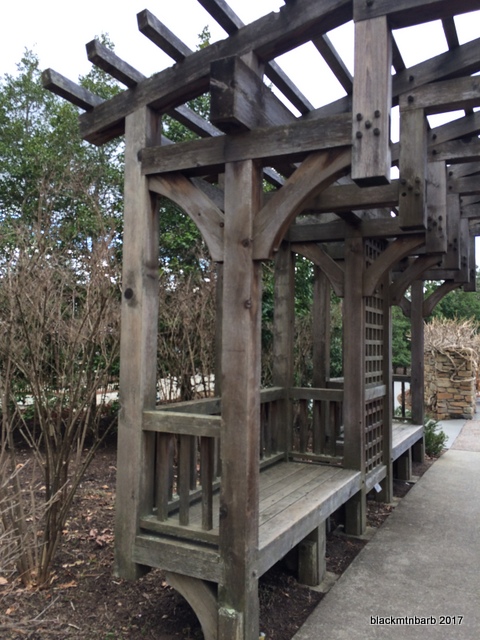 I'm sure on hot days, these benches will provide shady relief to visitors at the Arboretum. 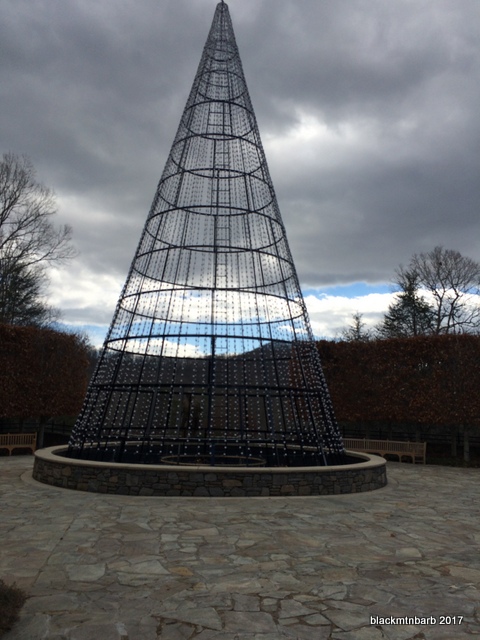 I guess this is either a Christmas tree for a few months, or a fountain for the warmer months, but February gives it a purely structural look. 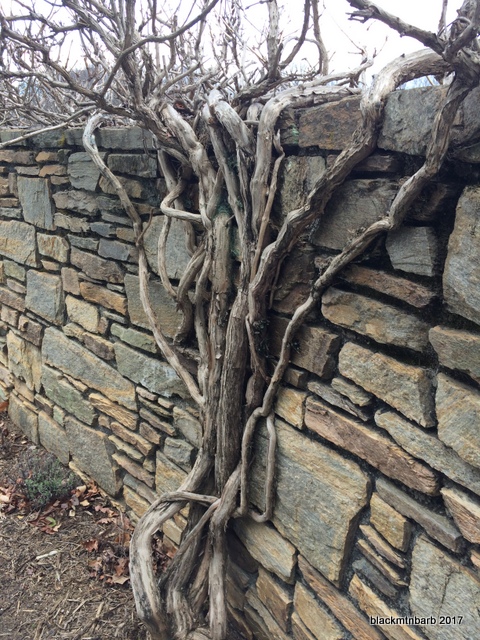 A beautiful stone wall which will be a background for these beautiful vines soon. 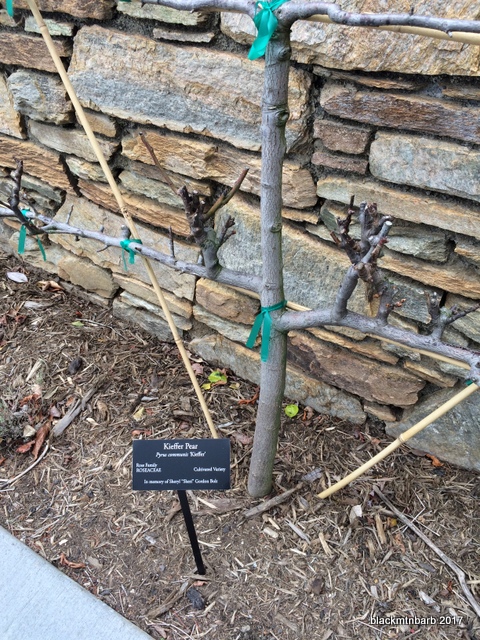 Here a vine is cut and trained to be a...what is that word? Trefoil? Espladair? Oh it's Espladier!  Love that google!

“A human being is a part of the whole called by us universe, a part limited in time and space. He experiences himself, his thoughts and feeling as something separated from the rest, a kind of optical delusion of his consciousness. This delusion is a kind of prison for us, restricting us to our personal desires and to affection for a few persons nearest to us. Our task must be to free ourselves from this prison by widening our circle of compassion to embrace all living creatures and the whole of nature in its beauty.”Einstein
Posted by Barbara Rogers at 2:00 AM 1 comment: 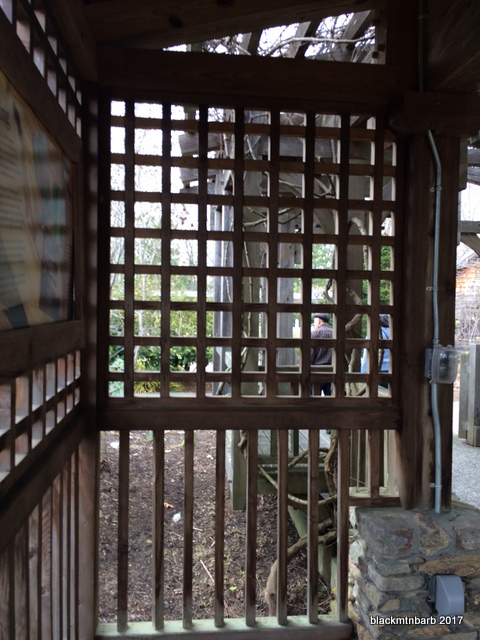 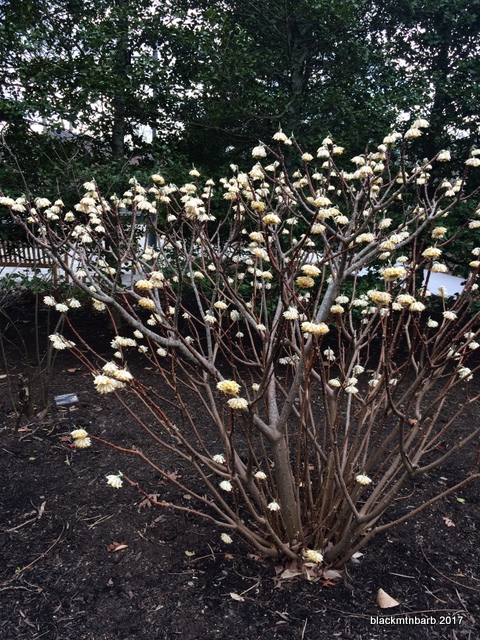 Wandering a bleak garden at the Arboretum a few weeks ago, I found a blooming plant (the only one!) 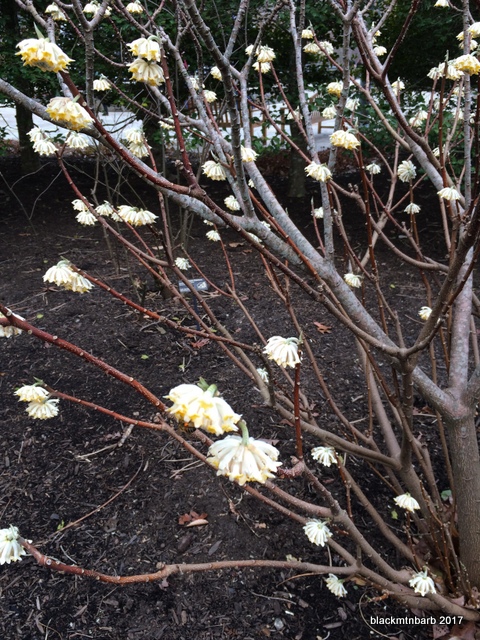 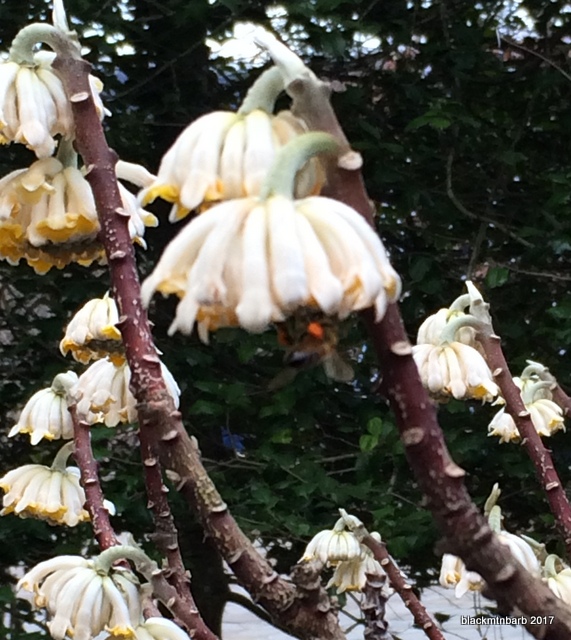 Yes that orange blob is an unfocused bee. There were only a few, and they all had the orange spots, so whether they are a variety I don't know, or these flower's pollen happens to be orange, I couldn't ask them. 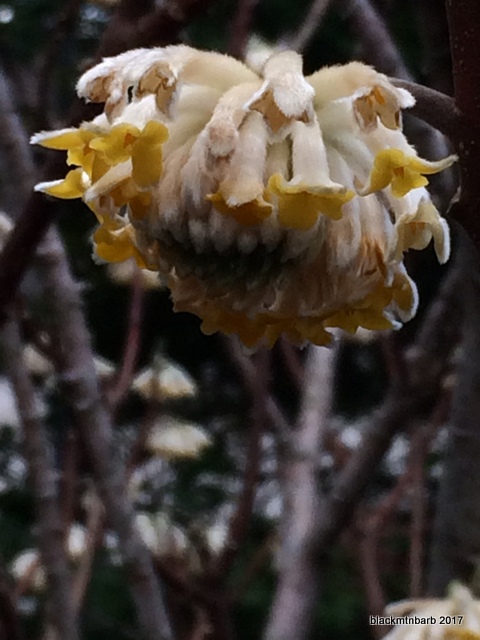 These flowers were very fragrant, and I usually don't catch smells that well these days.

“If there is love, there is hope to have real families, real brotherhood, real equanimity, real peace. If the love within your mind is lost, if you continue to see other beings as enemies, then no matter how much knowledge or education you have, no matter how much material progress is made, only suffering and confusion will ensue.”
Dalai Lama
Posted by Barbara Rogers at 2:00 AM No comments: