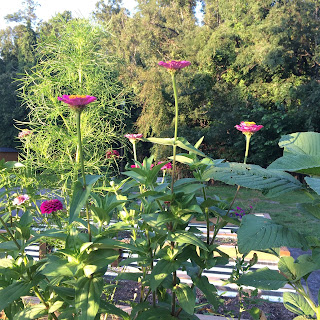 I haven't gotten to doing a lot lately.  Must be the summertime blues.  OK, I will pull myself up by my bootstraps and get going.  Who was it that said "start something, that's the hardest part?"

R. Crumb, cartoonist of "Keep on Trucking" fame, said:  "I work in erratic spurts. Getting started is like getting a rocket off the ground. You need the most energy and the most push to get started; once you're up there and you're going, then it's easier to keep going. Sit down and pick up where you left off, you know. Getting going is always tough."  It was his birthday yesterday, (1943).

Boy do I know what he means!  Inertia.  Science says a body in motion tends to stay in motion, a body at rest tends to stay at rest! I didn't need to study physics to know whichever law of motion that is! 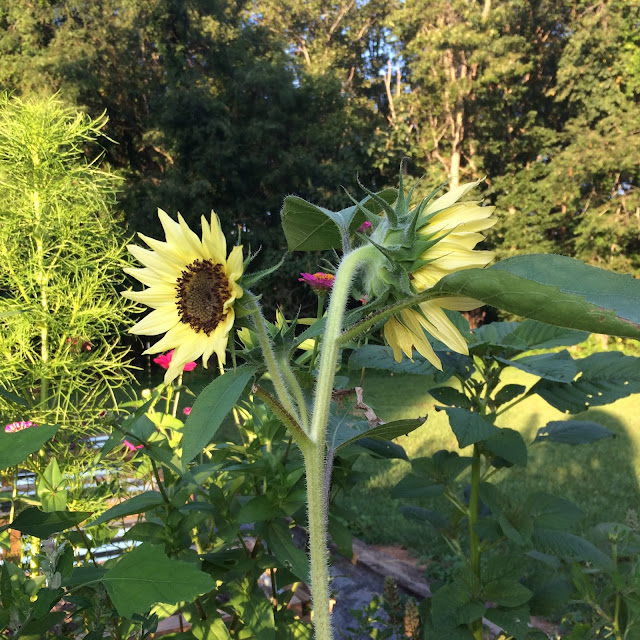 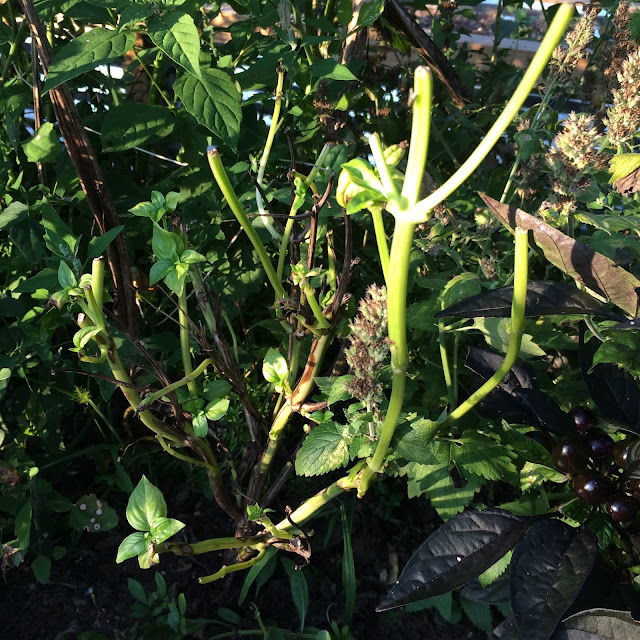 Someone took me up on my offer and picked all the basil off my very abundant plant.  I cut it back and maybe there will be some more...or will it turn bitter?

Posted by Barbara Rogers at 1:00 AM 7 comments:


Having invested not too much time or money into the two tomato plants which I've sort of tended this summer, I have finally put some of the fruit on the windowsill.  Don't know if any of it will ever be edible.  Sauce time perhaps.  (Though I admit I don't really like tomato sauce on anything but pizza.) 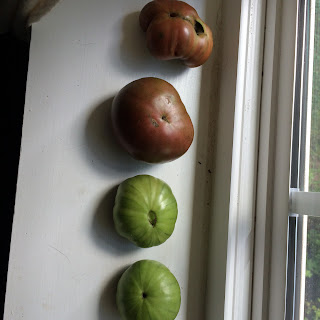 But I could cook up a quart or two of pizza sauce, and freeze it, perhaps.

For now, I enjoy seeing how these globular fruits just stay mostly green.  I was going to fry some of them up for fried green tomatoes, but haven't gotten to it. 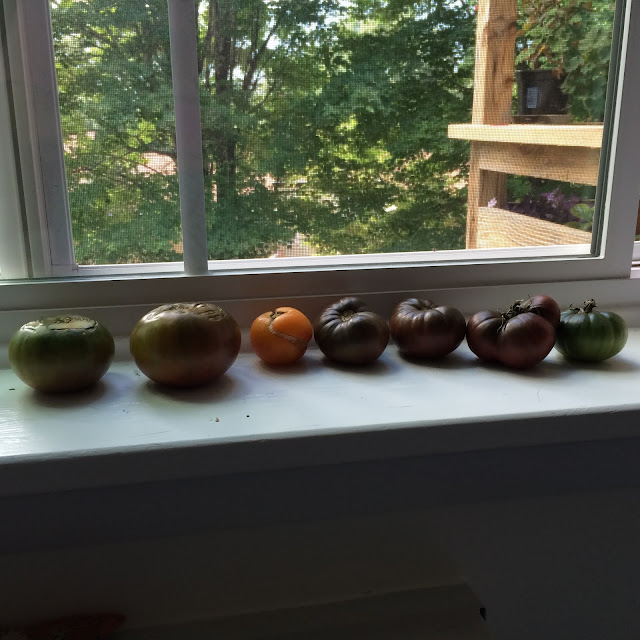 There is nothing love cannot face; there is no limit to its faith, its hope, and its endurance.
St. Paul
Posted by Barbara Rogers at 9:53 AM 3 comments: 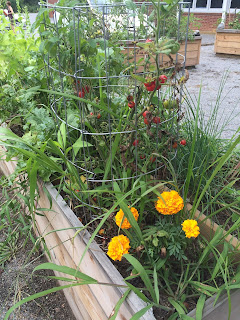 Another raised-bed garden is going to seed/weed. 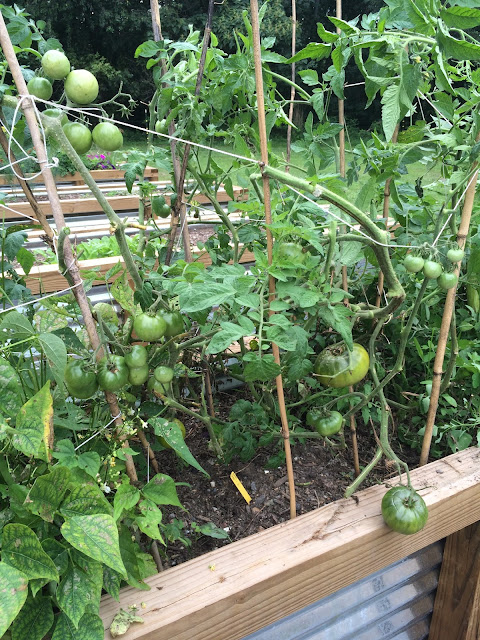 My tomatoes slowly ripen, and the beans have all become fodder for the Mexican Bean Beetles.  Oh well.  At least I've got the aphids on the tomatoes somewhat under control with my garlic spray...though we shall see about tomatoes.  They are so slow to ripen!

And picking them and placing them on a windowsill doesn't seem to hurry the process.  They just stop growing, I think.

School starts here today...which is very late compared to other years.  Not sure why...

For me it just means driving with avoidance of school buses dropping off or picking up kids on our two lane highways, which means lots of stops.  If I didn't drive a stick-shift that wouldn't be quite as aggravating.  Pushing the clutch in and out for about a hundred times keeps my left leg in some kind of shape I guess!

There are still 2 more days of August.  And even though my open windows at night give me soft breezes of 62 degrees at night, I know there're plenty more summer-like hot days ahead.

It usually happens the day after a rain, when there are clouds still around.  We've been having cool weather and low humidity even in the days, so the Thursday morning fog came more from just having caught a cloud or two in the mountain valley. 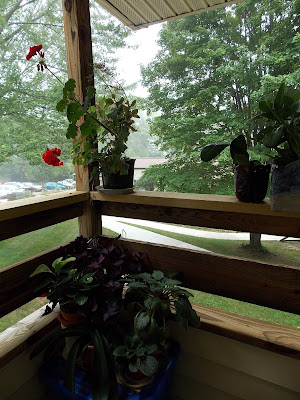 My house plants are nestled on the tiny balcony, since weather hasn't been above 85 lately.  The sun does hit this site sometimes, so the African Violets will be coming back inside if it threatens to burn them. 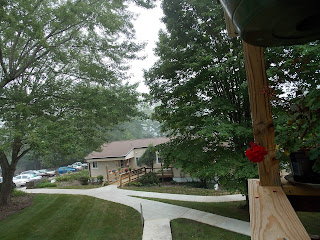 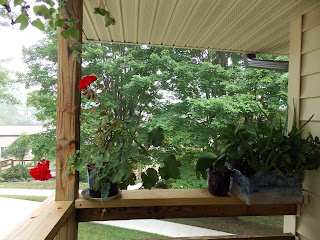 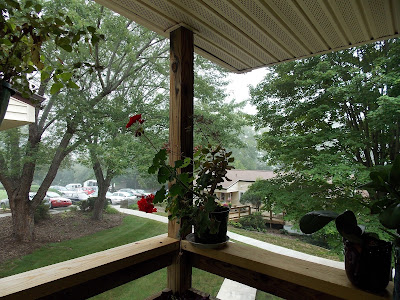 At the Tailgate Market

Those Mud Buddies are welcoming everyone to choose the pottery that they want to enjoy in their homes (or the homes of their loved ones).

We also have a lot of fun!

There are some new mugs, one of which belongs to Shelly, my good friend.  That leaves the other 2 available!  It's called variations on a theme...small, smaller and smallest...for people who don't drink a whole big mug of their favorite beverage.

See you between 9am -12pm at the corner of First and Montreat Rd. in Black Mountain, NC on Saturday!
Posted by Barbara Rogers at 8:30 PM 2 comments:

I have some photos that I might have shared before, of ancestors in wedding dresses.

First, my father's mother (Ada P. Swasey Rogers) wearing her wedding dress while holding her first-born son (not my father.) 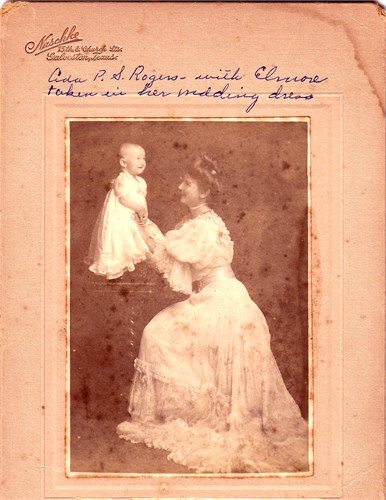 She and my grandfather (George Elmore Rogers) were married on June 6, 1905, in her family home, and there's a wonderful newspaper article about the ceremony, the guests, and what everyone wore.
I've copied the wedding announcement here, which you can skip if you're not interested in tedious details from that era.

SOCIAL AND PERSONAL
In the presence of relatives and friends
of the contracting parties, Miss Ada Phillips
Swasey and Mr. George E. Rogers,
both of this city, were united in marriage
yesterday afternoon at 5:30 o'clock at the
home of the bride's parents, Mr. and Mrs.
A. J. Swasey, No. 2223 Avenue K. Dr. J. K.
Black, rector, of Grace Episcopal Church,
performed the ceremony. The home was
very prettily decorated with smilax, palms,
ferns and white roses and carnations, the
white and green color scheme being very
closely adhered to. The ceremony was performed
in the front parlor, where before a
bank of Southern similax the bridnl party
stood. Just before the ceremony Miss Anna
Wilklns sang Mendelssohn's "Spring Song"
set to words. The weddingj march, the
bridal - chorus from "Lohengrin," was
played by Prof. Smith, assisted by the
Harpers. Rev. Black met the bridal party
at the altar. The party was led by the
groom and his best man, Mr. Charles
Ogilvy. They were followed by Miss Anna
Lou Rogers, bridesmaid, and Mr. Louis
White, groomsman. Miss Rogers was
gowned in a creation of white mouslin d'soi
with white chantlliy lace, and carried a
shower bouquet of bridesmaid's roses tied
with meline. Miss Stella Swasey, sister of
the bride and maid of honor, came next.
Her gown was mouslln d'soi, trimmed with
chantlliy lace, and she carried a bouquet
of bridesmaid's roses. Lastly came the
bride upon the arm of her father, who gave
her away. Her gown was of point d'sprit,
made over accordion pleated chiffon and
taffeta and was trimmed in real lace. Her
veil of tulle was caught with a spray of
orange blossoms. She carried a shower
bouquet of bride's roses. In her hair she
wore a silver comb which had been worn
by her grandmother, about her neck was a
necklace of pearls. The ceremony of the
Episcopal Church was never more Impressive
than on this occasion, and at its conclusion
the guests gathered about the
young couple and showered them with congratulations.

After the ceremony a reception-was ren-
dered tho guests. Mrs. Swasey's receiving
gown was of white chiffon, trimmed in
bands of white lace. Refreshments of Ice
cream, cakes and punch were served. In
the cake cutting, Mr. Pearson recovered the
ring, which he presented to the maid of
honor, and Miss Laurel Dunn found the
thimble. The cake was cut with a silver
knife, an heirloom, whose usefulness 'dates
back to the time of the" great-grandmother
of the bride. Miss Dunn also caught the
bride's bouquet.

Mr. and Mrs. Rogers left last evening at
7:30 for Denver, where the honeymoon
will be spent. The bride's going away
suit was cloth of gold, champagne color,
with embroidered shirt waist.

The young people received a large number
of presents. They included a large
amount of silverware, china sets, cut glass
pieces and articles, both useful and ornamental.
A number of congratulatory telegrams
were received.

Among those from out of town in attendance
at the wedding wore: Mrs. McCall and
Mrs. King of Houston, aunts of the bride:
Mrs. N. C. Munger and Mrs. W. A. Grant
of San Antonio and Mrs. Sherwood of Houston.
* Source: THE GALVESTON DAILY NEWS, WEDNESDAY, JUNE 7, 1906.

The next photo (shared again) is of my mother in her wedding outfit.

1936 is written above the caption of the picture. The date of the wedding was Nov. 21.  It's really hard to read isn't it? So here are the tedious details of the next generation getting married.


Mrs. George E. Rogers Jr., prior to her marriage at 4 o'clock this afternoon in Laurel Heights Methodist Church, was Miss Mataley Mozelle Munhall, daughter of Mrs. Fred Munhall.  The church was decorated with potted palms and tall flower baskets filled with white chrysanthemums and white gladioli.  Rev. Robert E. Goodrich performed the ceremony in the presence of a large gathering of relatives and friends.

Mr. Fred Jones sang "I Love You Truly", being accompanied at the organ by Mrs. E. H. Lovelace.

The bride was given in marriage by her mother. She wore a becoming tailleur of wine colored wool trimed with a wide collar of fitch fur.  Her off-the-face hat was of wine felt ornamented with a brilliant pin.   She wore a corsage of tea roses.

Mrs. Munhall was in black trimmed with white, and black and white accessories.  Her corsage was of gardenias.

Miss Kitty Beth Christian of Dallas was the maid of honor and only attendant. She wore a green suit with green accessories and a corsage of tea roses.

Chauncey Rogers of Houston was his brother's best man.

Mr. and Mrs. Rogers left immediately for a motor trip to the coast, the bride traveling in her wedding suit. Upon their return they will be at home at 1201 W. Woodlawn avenue.


A bit of trivia is that my paternal grandparents (who lived in the same city) refused to attend my parent's wedding because there was going to be liquor served at the reception.  They were rather adamant teetotalers, weren't they? But the bride's family put on the party, and they were rather adamant drinkers!  Already the in-laws were at odds!

Next I want to share some rings. I've given these to my eldest son, thinking maybe he or one of his chilrden will have some interest in them. My middle son already had seen them, and my sister sent them to me.  I think the small high school ring may have been my mother's - Jefferson High School was where my parents met in San Antonio. She actually graduated before my father did.

The larger ring was the wedding ring which my mother's step father wore, Frederick Munhall. 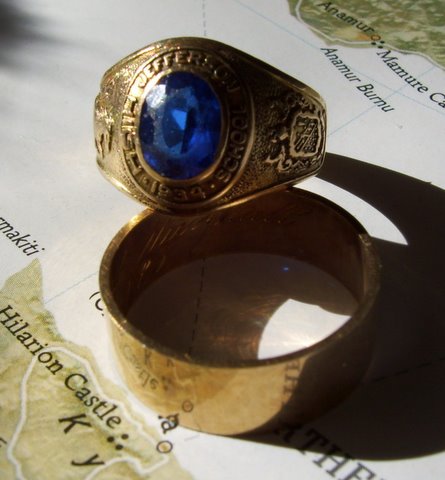 The Inscription in the wedding band means "Whom
virtue unites, death will not separate" and was a "motto" with
additional smybolic graphics for 14th & 32nd degree Scottish rite
Freemasonry. However, perhaps due to the popularity of the sect in that
era, many other non-Masons used it in weddding bands, but Fred's being
a 32nd degree Mason, I believe it reflects his following of Freemasonry.  This information is from my sister.

Finally, for the next generation (mine.) I didn't get to attend my elder or younger cousin's weddings, being too far away at the times.  So here's one of them including my grandparents, which I dearly love. But whoever took the photo of the photo, didn't get it in focus enough, so it really doesn't matter which of my cousins it is. Sometime in the 1950s. 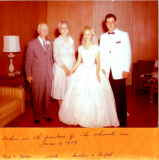 In case you're waiting for my wedding pictures, they are being saved for another occasion!
Posted by Barbara Rogers at 1:00 AM 8 comments: