Yep, I've closed, logged out, and don't see any reason to let those ads and those algorithms be part of my life any more. 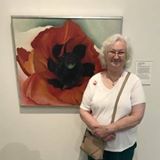 I posted (well shared a post from 3 years ago) that popped up, and it was a black woman sculptor with her work, a nude man and woman not showing anything really controversial.  And after all, I'd posted it 3 years ago.

Then I was frozen out, could share other people's posts, and read them, but wasn't allowed to post anything on my own.

After an hour, where I reported it that I couldn't post on my own timeline, and when I observed a couple of underwear-clad women with other people's faces superimposed upon them, I decided that the kids running FB were not only patriarchal misogynists, but also racists.  No way I wanted to continue to be part of that organization.

So I'm following two of my sons' footsteps and not going to be on Facebook any more.
And that means I won't get those cute messages which it also runs.

I can still receive texts on my phone line.

I can still receive and send emails.

I can get my news of the world on various news apps.

But no longer deal with that narrow set of strictures, which became narrower and narrower.

So friends, see ya in the funny papers!
Posted by Barbara Rogers at 11:48 AM 5 comments:

Last day of the month Animals!

Not having very many animals in my life these days, this meme is limited to just once a month.

This month I'll introduce to you a couple of my grand-cats, who live with my grandson Michael. 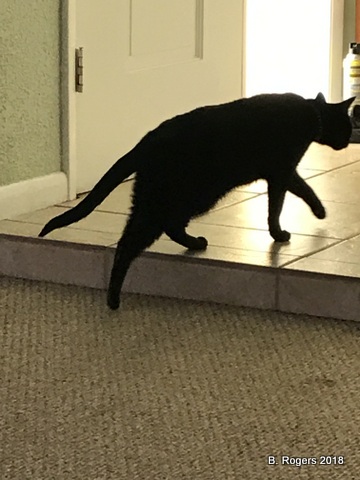 Teeny is the house-alarm cat, who sits in the sun most of the day, and if anyone approaches the house, she moves out of the blinds, which make a slight rattling sound. 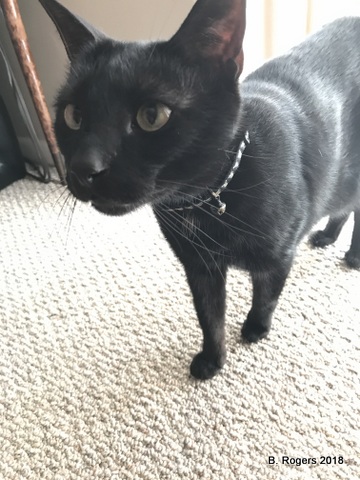 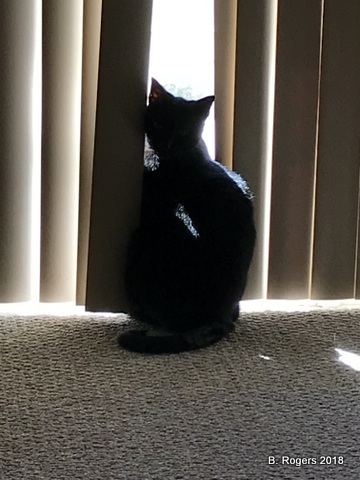 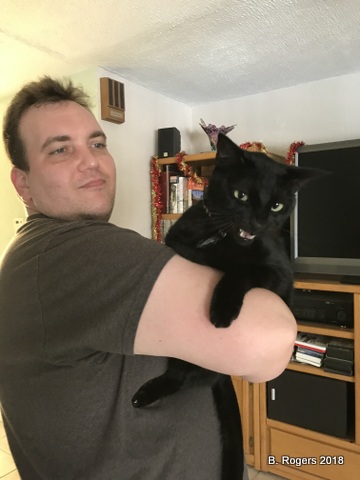 Michael can pick her up, but she does the hiss thing. 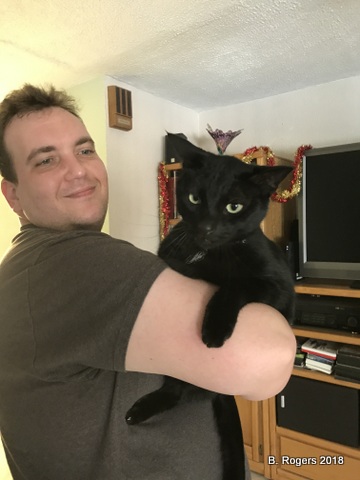 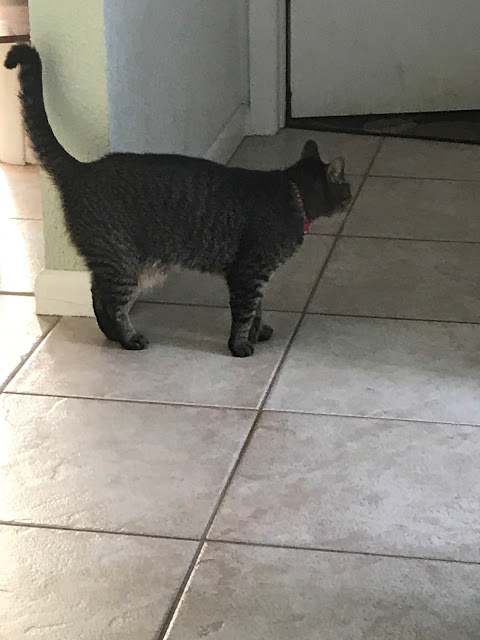 Other cat (I can't remember her name) is shy, and looked at me a few times, but wouldn't come close. 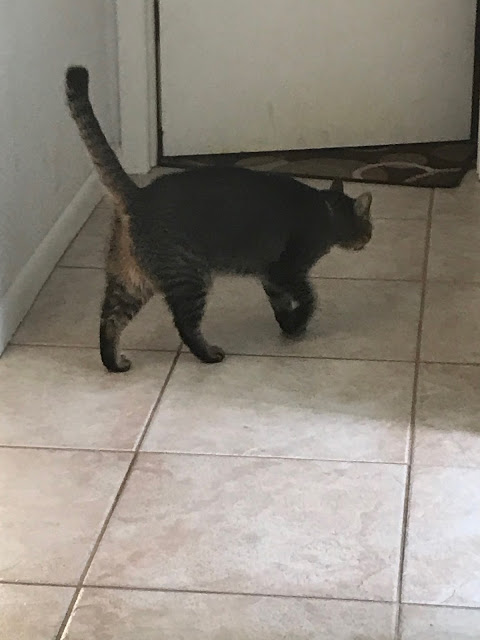 
Posted by Barbara Rogers at 1:00 AM No comments: 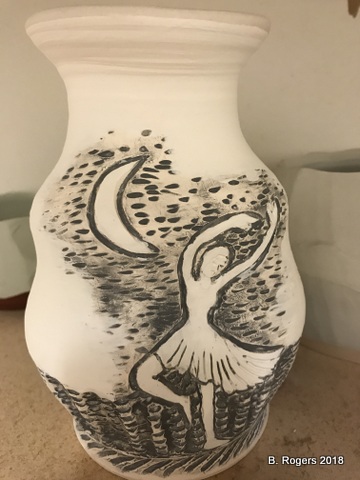 A new technique...let's try carving, then using dark glazes to highlight (or is it lowlight?) the lines. 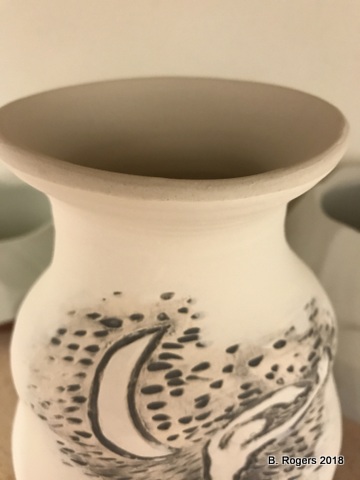 This bisque ware piece is somewhat pink, but will turn ivory when fired to cone 5-6.  There is a coat of matt clear on the moon and the dancer, and the rest of the vase, except for the lower carved details. 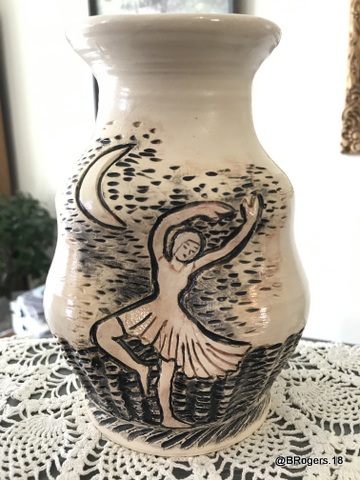 After the glaze firing, the matt clear glaze all over seems fine, except where it interacts with the thin remains of the black stain...then there's a brownish tint.  Otherwise, I kind of like it. 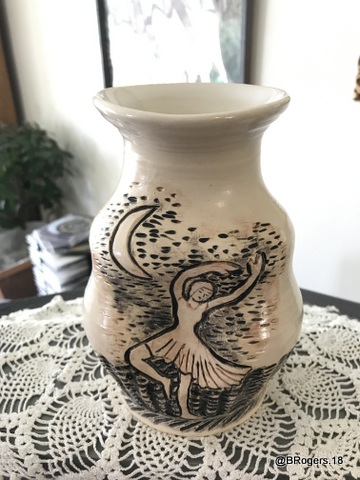 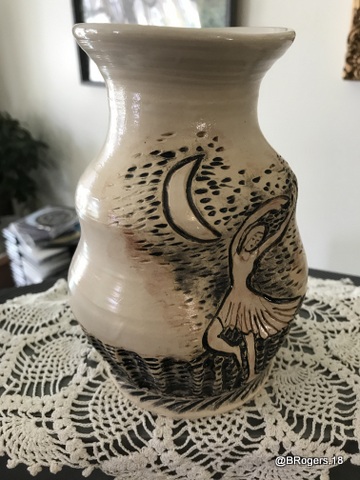 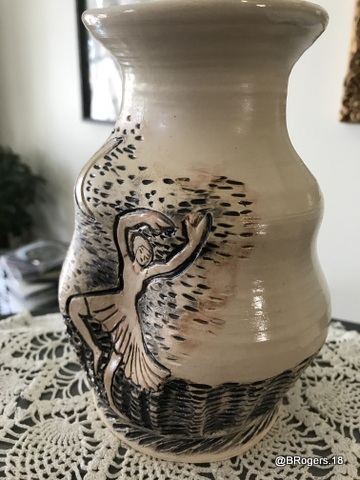 The concave face is interesting, but next time I think I won't do a double curve as well as all that carving.  Well, it was all experimental!

When we begin to listen with our hearts rather than our heads, our whole world changes and becomes softer.

While riding the wave of life you must also practice stillness so you can flow with, rather than resist the wave's motion.
Posted by Barbara Rogers at 1:00 AM 2 comments: