Happy birthday Grandpa, July 30,  1891.  Or possibly 1892...according to his draft card in 1917.  But his death certificate also has a difference, with July 20, 1891 listing his birthday.  That was filled in by his older brother.  I don't know how the draft card got the year of his birth different.  Such is the fun of ancestry! The 1910 census concurs that he was born in 1891. The town was Weesatche, TX, and named after the tree, with spelling different, but pronounced the same, Huisache.  It's located near Goliad, TX.

Albert (Bud) Webb, the grandpa I never knew. He bounced my mom on his knee and then was gone when she was just 2 years old.

So it's a bit hard to think of him as my grandpa, since he died so young. He had his 28th birthday, then was killed by accidental electrocution in his home in September of that year. 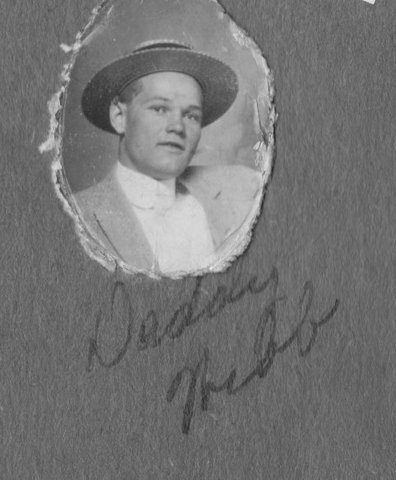 From my mother's album, where she had just these pictures of her "Daddy Webb."

That draft card described him (in June of 1917) as tall, medium build, blue eyes, slightly bald.  He worked in real estate and had a restaurant, in San Antonio, TX.  That's where he is buried, in Mission Cemetery.  His marker says "He Is Not Dead, He Is Just Away." 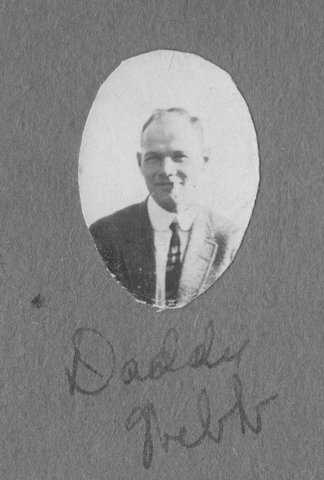 It must have been very difficult for his survivors, not only my mother and grandmother, but Bud's other family with parents and brothers and sisters.  My mother never mentioned any contact with them, or the many Webb cousins.  Her mother remarried in 1921, but Fred Munhall died within 6 years. So my mother was raised mainly by her mother and her mother's parents.  I'm named after my maternal great-grandmother, who I never met either.

I'm sharing this post with Sepia Saturday this week.  It has little to do with the meme, but is from the past, so does connect with the "sepia-ness" of the site. 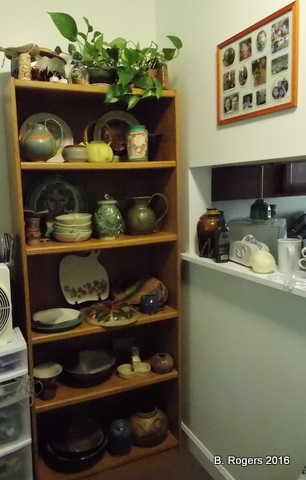 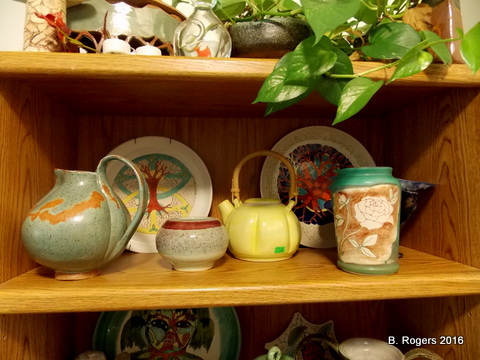 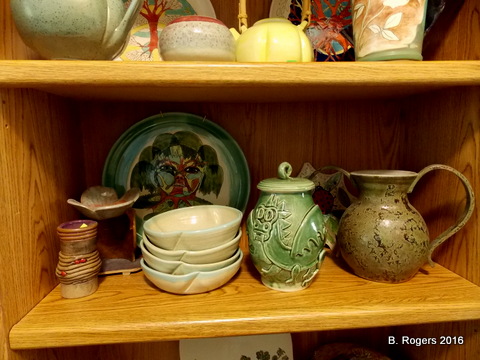 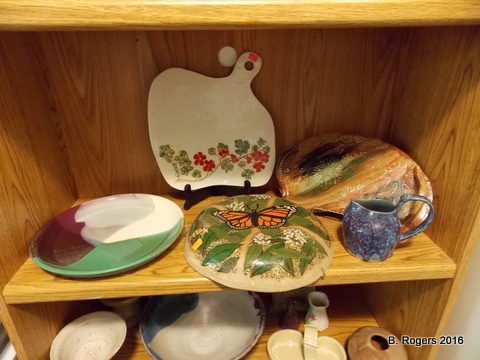 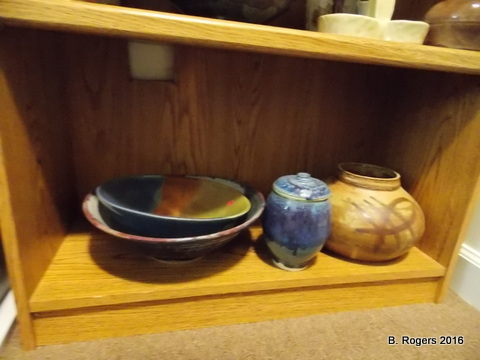 When you do things from your soul, you feel a river moving in you, a joy.
Jalaluddin Rumi, translated by Coleman Barks
Posted by Barbara Rogers at 1:00 AM 1 comment:

Another view of the pots at home

By the wonderful windows overlooking trees trees and more trees, I have a bookcase shelving unit full of pottery. 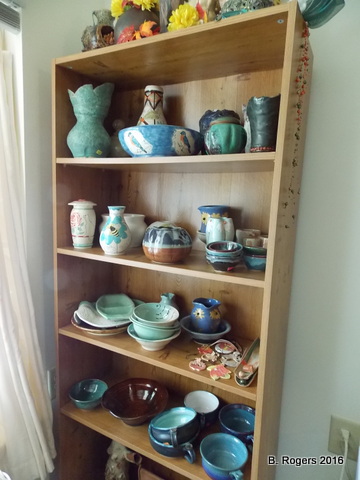 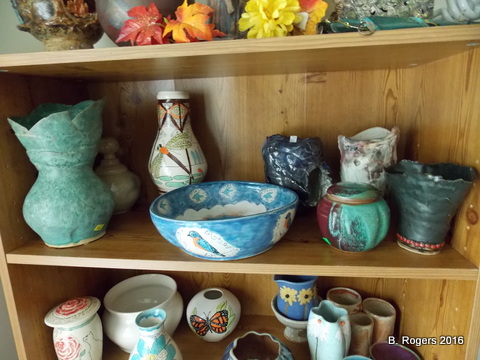 Some of my latest work which I have mixed with some older pieces. 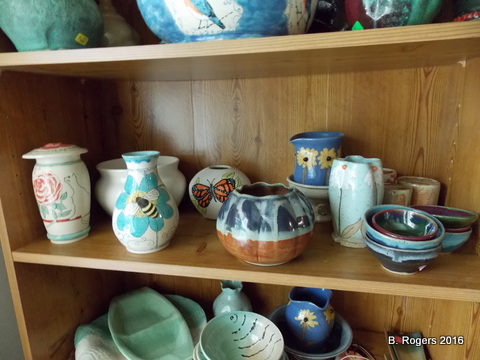 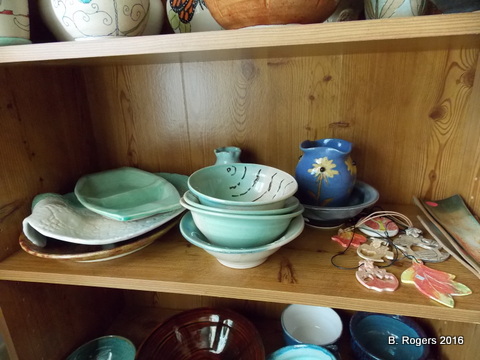 But simple plates and bowls are still around. Those are pendants and some incense holders to the right. 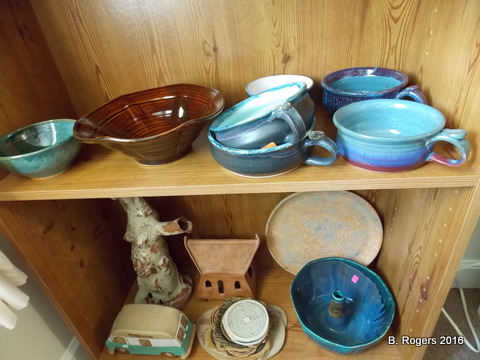 Bottom shelf has a couple of pieces that aren't for sale, as well as a stack of trivets of labyrinths, and a bundt cake pan that is for sale!


It is not our differences that divide us. It is our inability to recognize, accept and celebrate those differences.
Audre Lorde
Posted by Barbara Rogers at 1:00 AM 1 comment:

Some of my favorite pots

Sometimes you just want to look at what you've got... I have a lovely set of built in shelves in my current apartment.  This week I unpacked more tubs of pottery and put them on display. 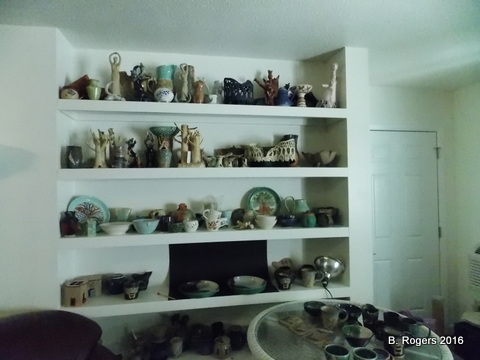 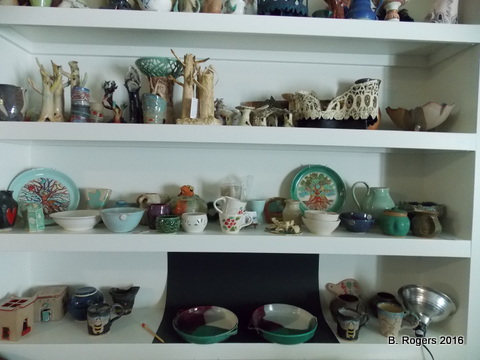 You may have noticed the black backdrop, which is where I take my photos of the new pottery.  Pretty simple, except getting the lighting right, and the coloring.  But it's a way to keep records. 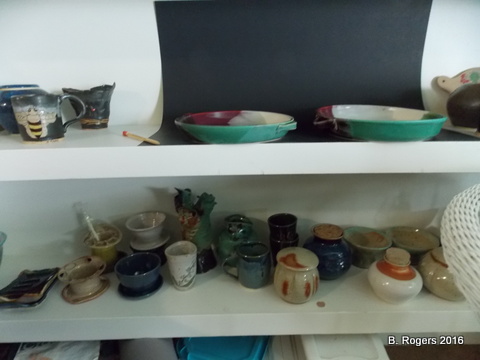 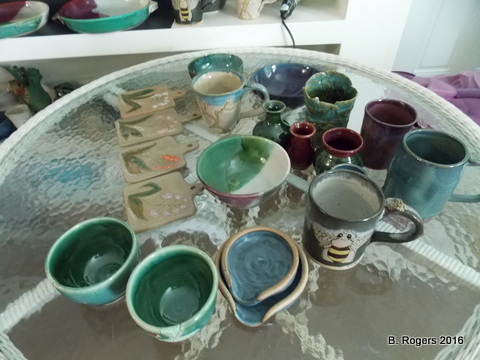 These are the things that will go to the market this Saturday. 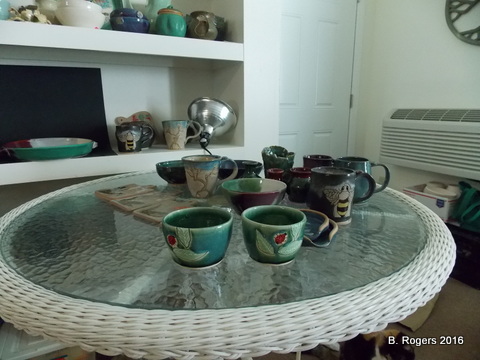 I'll be bringing home some of the things that have been at market all July. It's time to think about August!

There are 2 more sets of shelves to share with you...

It takes a sensitive ear to tune in to the silence of the heart, but it is there in each one of us. Madisyn Taylor Daily Om
Posted by Barbara Rogers at 1:00 AM 3 comments: