Down by the seaside playin' in the sand! 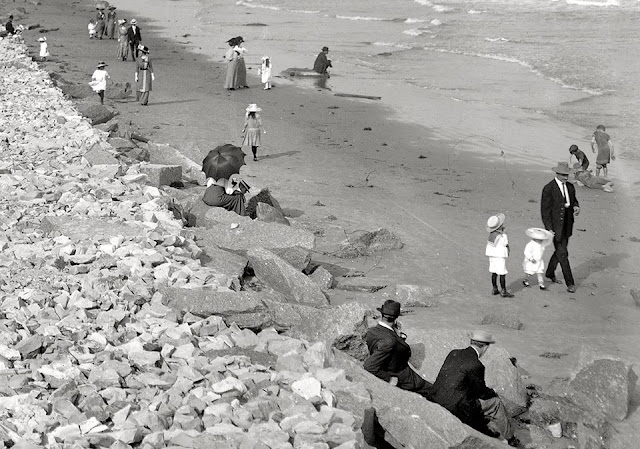 1905 The seawall in Galveston TX, built following the 1900 disastrous hurricane. 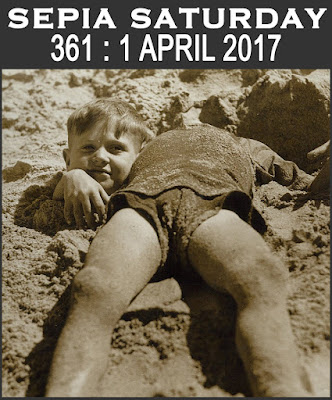 The Sepia Saturday prompt this week has some young boys playing in the sand! What an image! It's a photograph from the collection of the State Library of New South Wales which was taken in the 1940s. It features parts of both Billy and Graham Green.  Go over to Sepia Saturday to see what other bloggers might have come up with for this meme...scroll to the bottom where our names give links to our blogs! 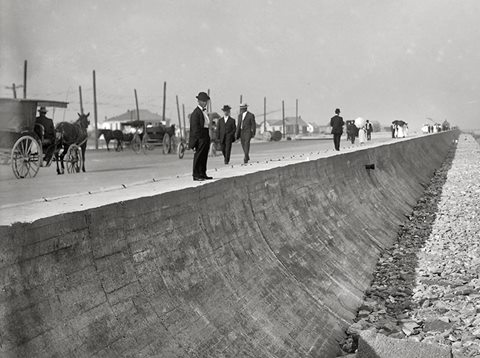 Here's a better shot of the Galveston seawall in 1905.

Sadly I never met my Uncle Elmore, who was a child in Galveston.

Elmore Rogers, born in 1906. He died from drowning in 1916. Elmore was my father's oldest brother, who he knew only until his second birthday because Dad was born in 1914. I had included here a copy of his death certificate, but withdrew it from this post, because I wanted to honor a 10 year old boy who was loved and missed by my family...and never talked about.

If people lived in Galveston, there was the Gulf of Mexico, and the bay always around.  Drownings probably happened frequently when children didn't watch closely how their play and the force of the Gulf of Mexico were merging with each other. My granddaughter plays along the Florida beaches on the Gulf of Mexico, which is usually quite tame. (Those are someone's toes being carefully buried in the sand!) 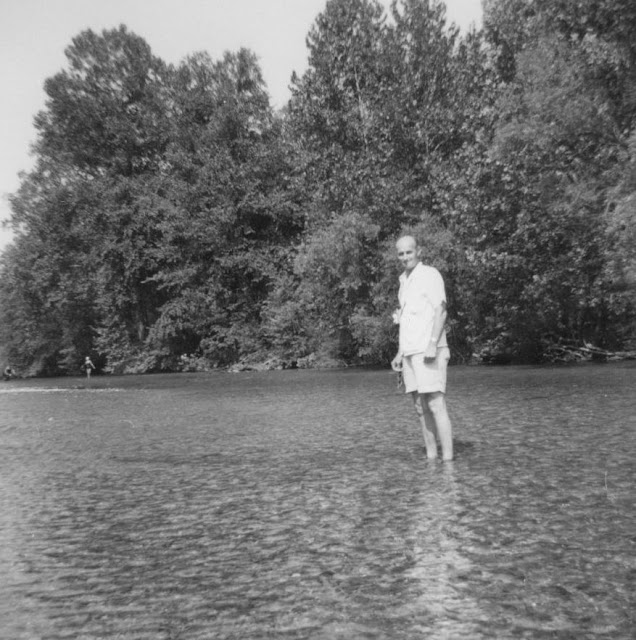 My dad in a river in Missouri, where we grew up.  Being brought up in the midwest, I was thrilled when I visited the ocean. 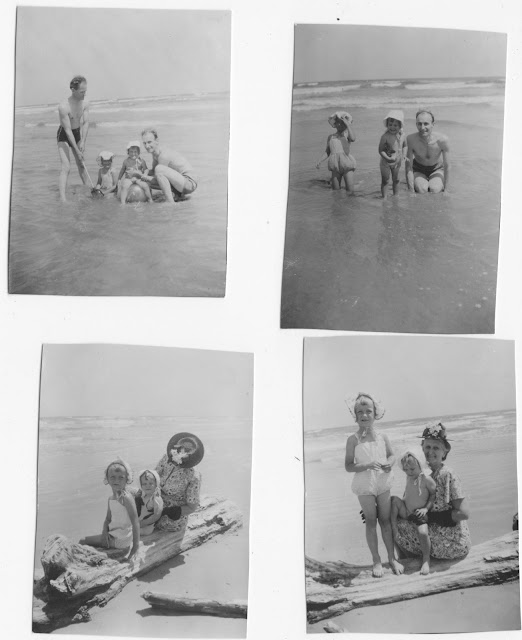 My dad and his brother, Chauncey, in the top two pics, and my sis and myself with our grandmother in the bottom ones...at Galveston in 1948.  I know neither of us girls could swim then, so we were more or less wading, and carefully avoiding the waves. I'm sure my grandmother was very cautious. 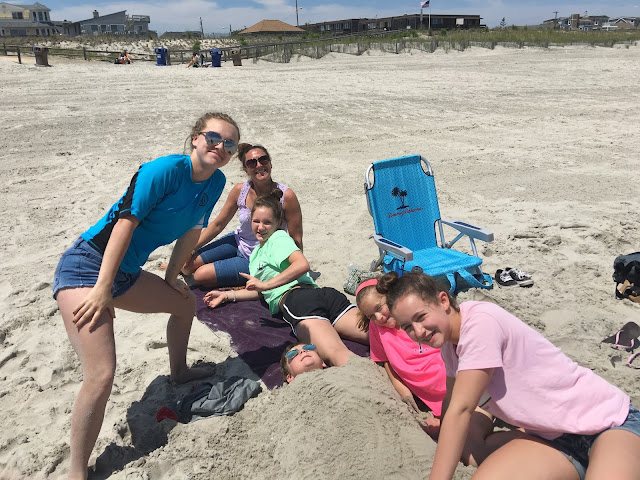 My family of grands does love to play on the beach...does this remind you of the Sepia Saturday photo above just a little bit?

Well, this week I've got some things coming out of the glaze kilns, slowly but surely...one or two or three at a time.  Not at all like those wood firings where hundreds of pots come out all at once. 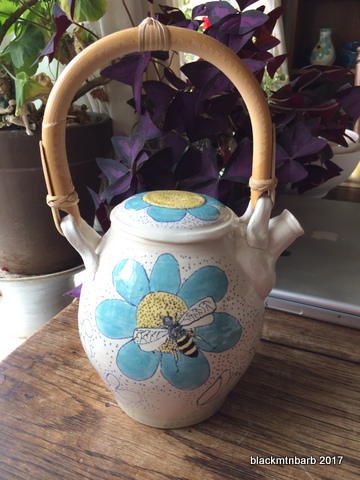 Nope, one of our little Skutt kilns chugs away daily, either one or the other. The community studio here in Black Mountain is great, and everyone is given space in bisque and glaze firings after waiting about a week, usually.  That is a few finished pieces a week, these days.

So I'm glad to share another teapot that's finished. 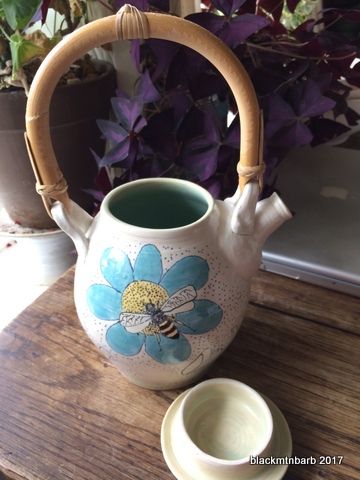 The fun of getting those reed handles on is that you are positive you're going to break the little pottery loops right off the teapot, no matter how much you've soaked the handles.  It's just the spirit of bending and fitting, and then it's done! 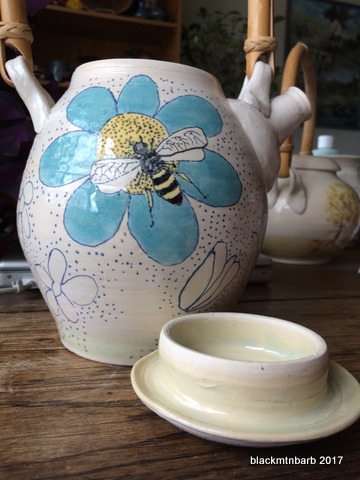 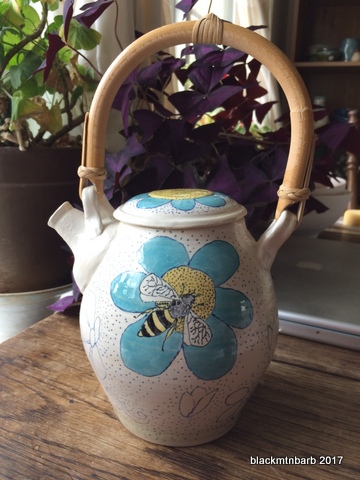 As the living vehicles for our spirits, our bodies deserve loving attention and care. Madisyn Taylor
Posted by Barbara Rogers at 2:00 AM 1 comment:

Bugs and bowls that shout cheerfully, but quietly...

If you've been drinking the night before... 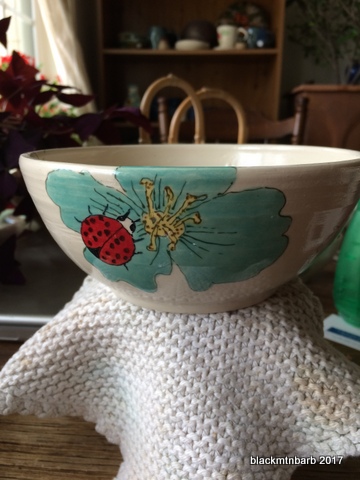 A friend ordered some bigger cereal bowls, and I've started making them for her. 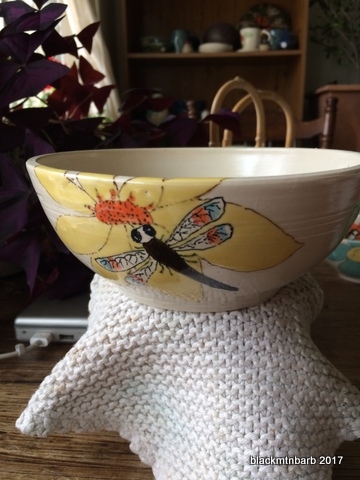 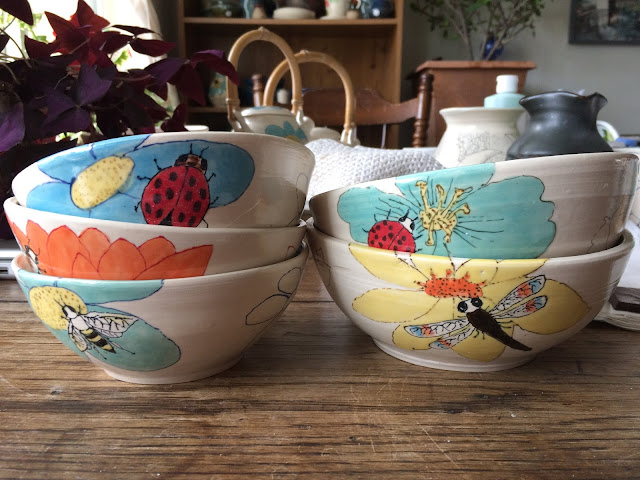 Smaller ones on left, about 5 inch diameter, larger on right are about 6 inch diameter.  There are more still coming, and then I'm going to do something very different! Well, for me it is, anyway!

Every farmer who plants a seed takes a risk. We work through faith that the good deeds we do are to put down roots. The roots are invisible, but they sustain plants that may not give fruit for awhile. How lovely is this planting the seeds of love.

Posted by Barbara Rogers at 1:30 AM 3 comments:

I made a couple of teapots, just for fun, using handles I had already, and putting some interesting designs on them.

Here's the one that was supposed to be purple mountains majesty.
Mmm, those don't look that purple, do they? 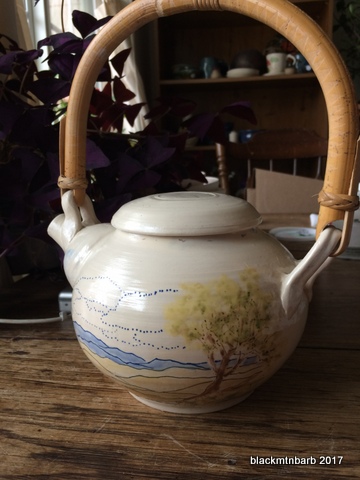 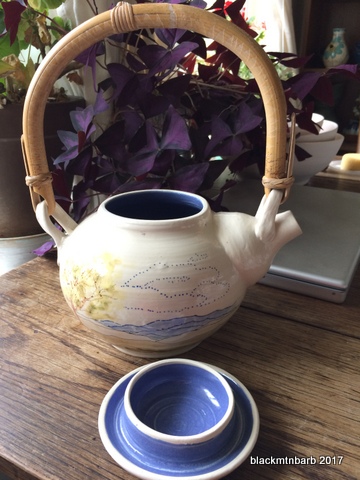 But I like that the blue is matched in the interior liner of the pot. 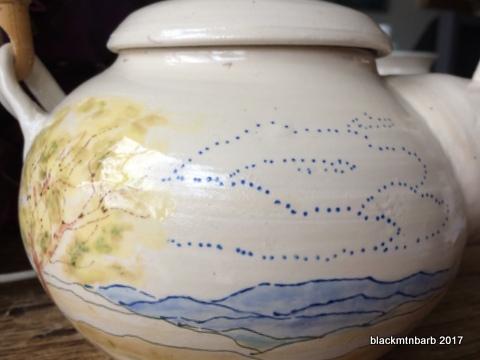 So it's one of those pots where I have to let go of my expectations.  Any other potter out there ever had that experience?

When waking up is hard to do... 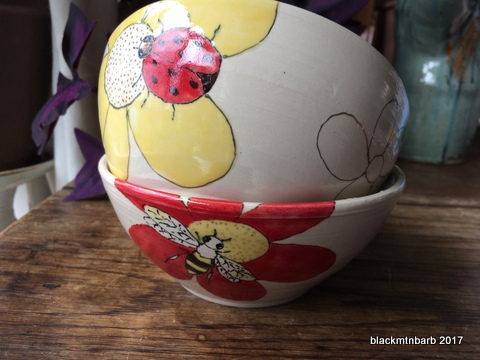 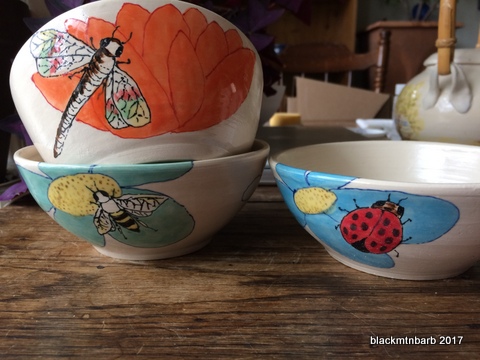 Here are some more of them!  I can imagine the fun of waking up to these bright colors!