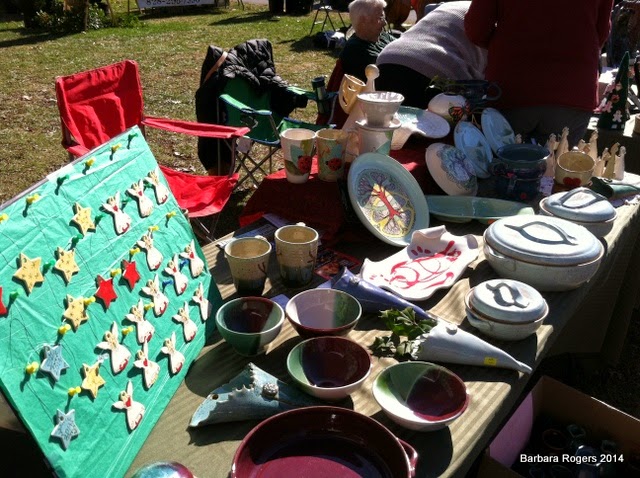 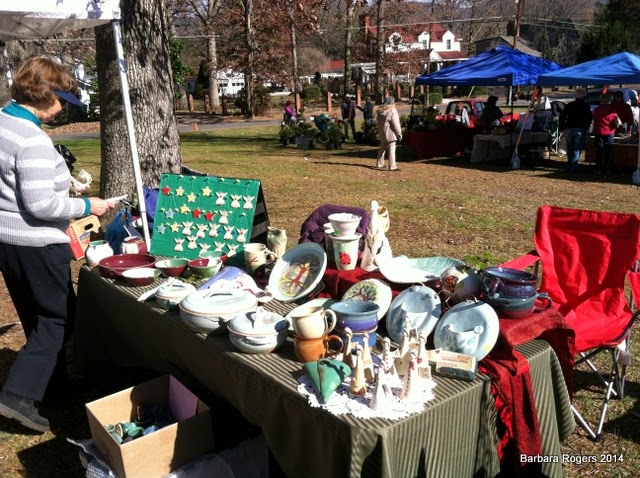 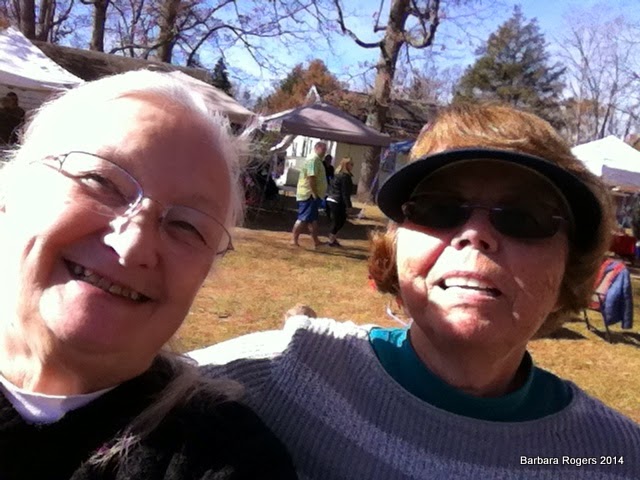 Barbara on the left.
Posted by Barbara Rogers at 1:00 AM 3 comments:

So much joy
So much sadness

And luminous light and warmth in the sunshine!

Today the Mud Buddies remember all this summer, as well as the five prior ones.  And we had a visit from a former Mud Buddy as well.

Tomorrow I'll share the set up and the beautiful pots.
Posted by Barbara Rogers at 1:30 AM 4 comments:

Out in the world 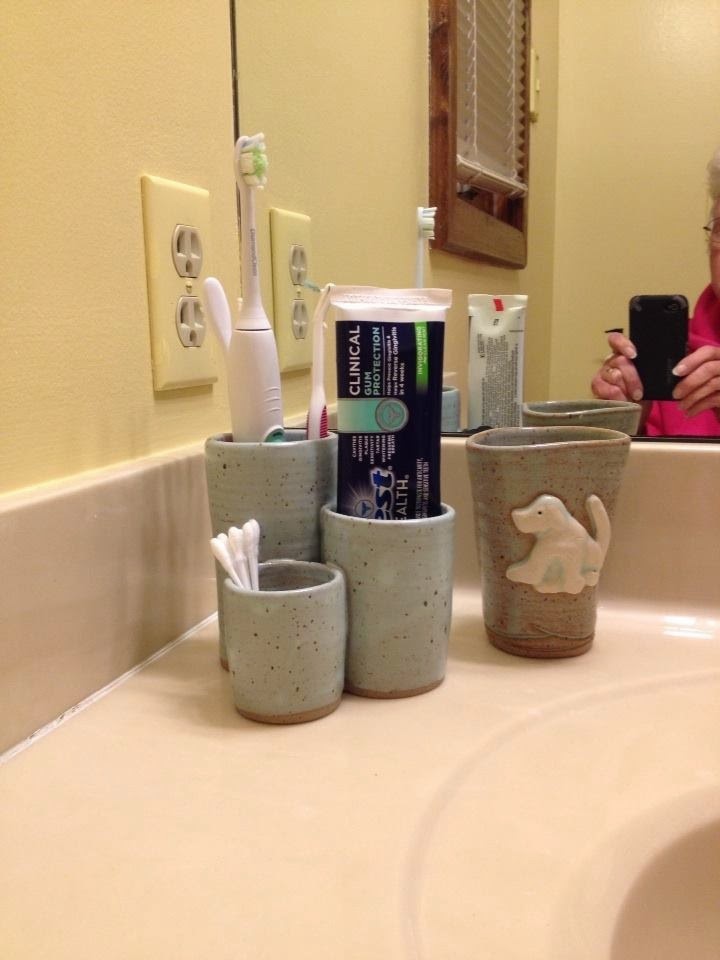 There they are, my little babies, all grown up and living independently.

Thanks to my friend (who tried to get out of the shot, but the edge of her is there!) for taking a picture of the bathroom caddy which I made, as well as the little dog tumbler.  Unfortunately the glazes won't match, since we've been having some Celadon problems...but they are close enough to coexist on my friend's counter.

Thanks so much for sharing the photo!
Posted by Barbara Rogers at 1:00 AM 3 comments: 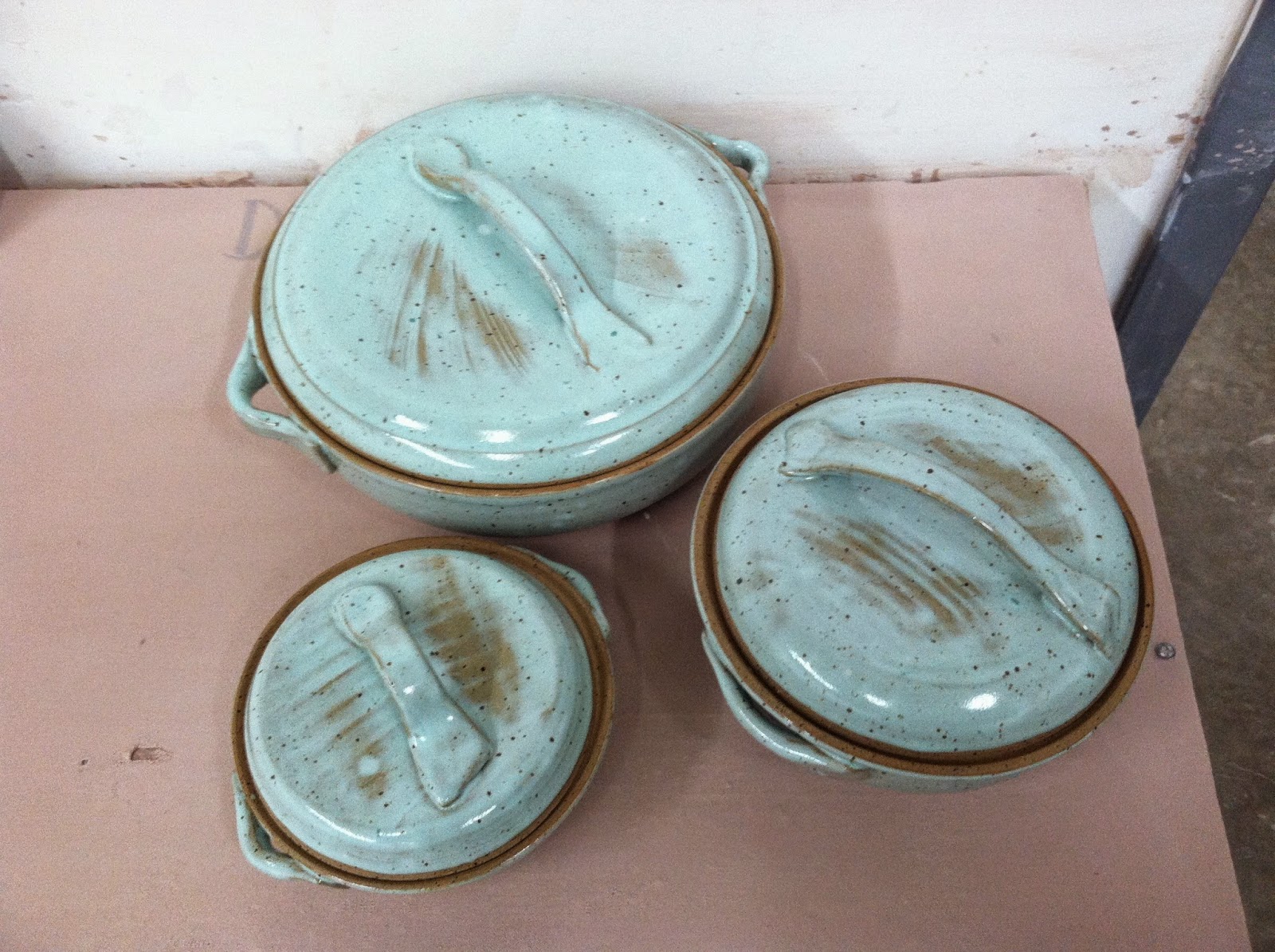 The living room is covered with pottery, being priced and wrapped and packed.  I've got the Tailgate Holiday Market tomorrow morning 10-1...same place in Black Mountain behind the First Baptist Church under the trees off Montreat Rd.

Two more sales are coming up in the first weekend of December.  I'm skipping anything to do with sales over the Thanksgiving weekend...am seeing some family members after a long time missing them.  But if I see any pretty pottery, I'll take some photos and share with you!


Posted by Barbara Rogers at 1:00 AM No comments:

The least of these 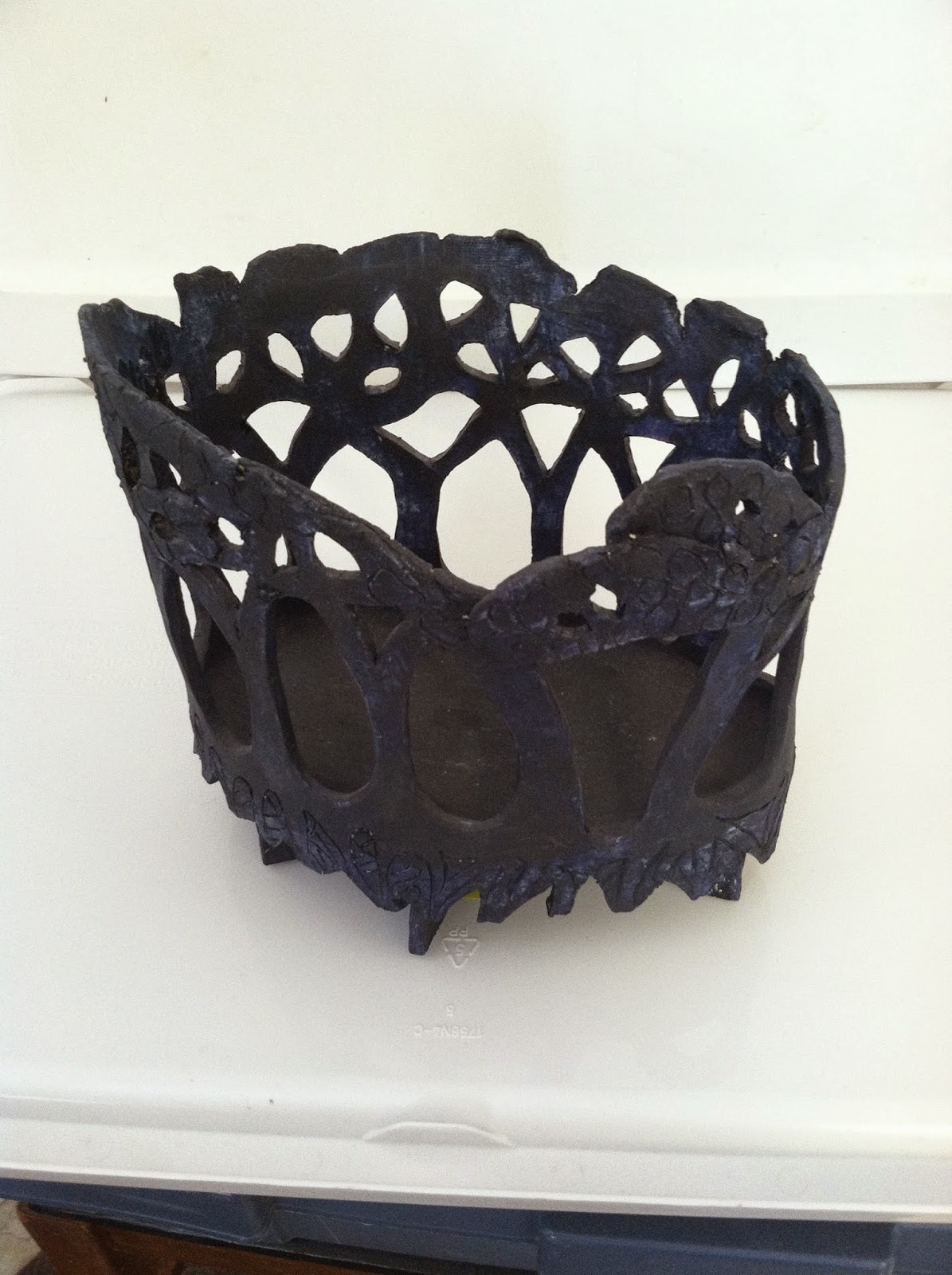 Consider this a work in progress...I've got intense cobalt stain permanently in most of the clay, but then, some places are paler, which doesn't look quite right.  So I'm going to do some more finishing touches.  This forest project piece is the least favorite of mine.  It may become garbage, who knows.
Posted by Barbara Rogers at 2:00 AM 5 comments: 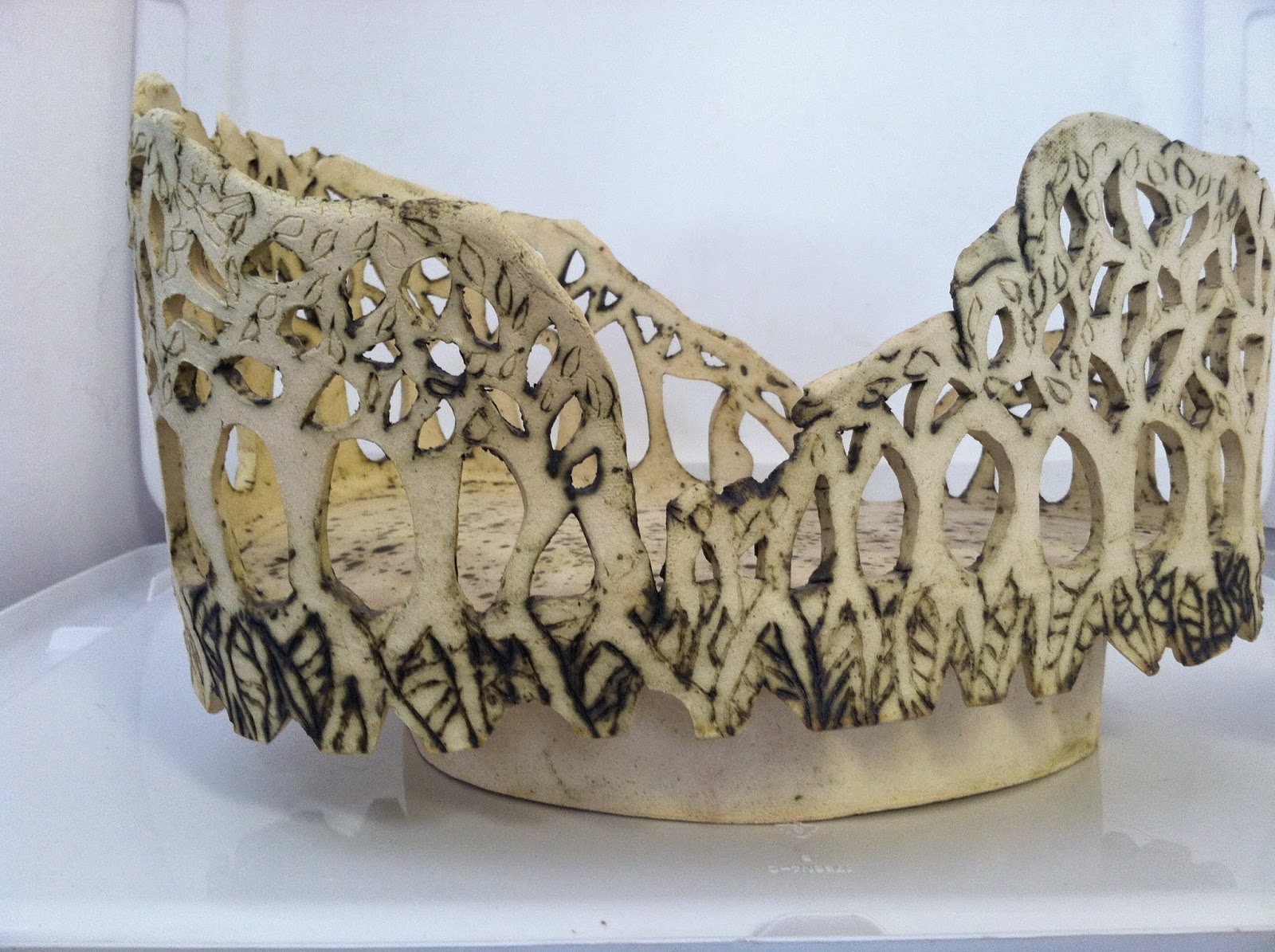 I want to stain the pedestal darker, so it sets off the roots.  Just need to get out the paintbrush.

Then there are the little trees that go together with this sculpture... 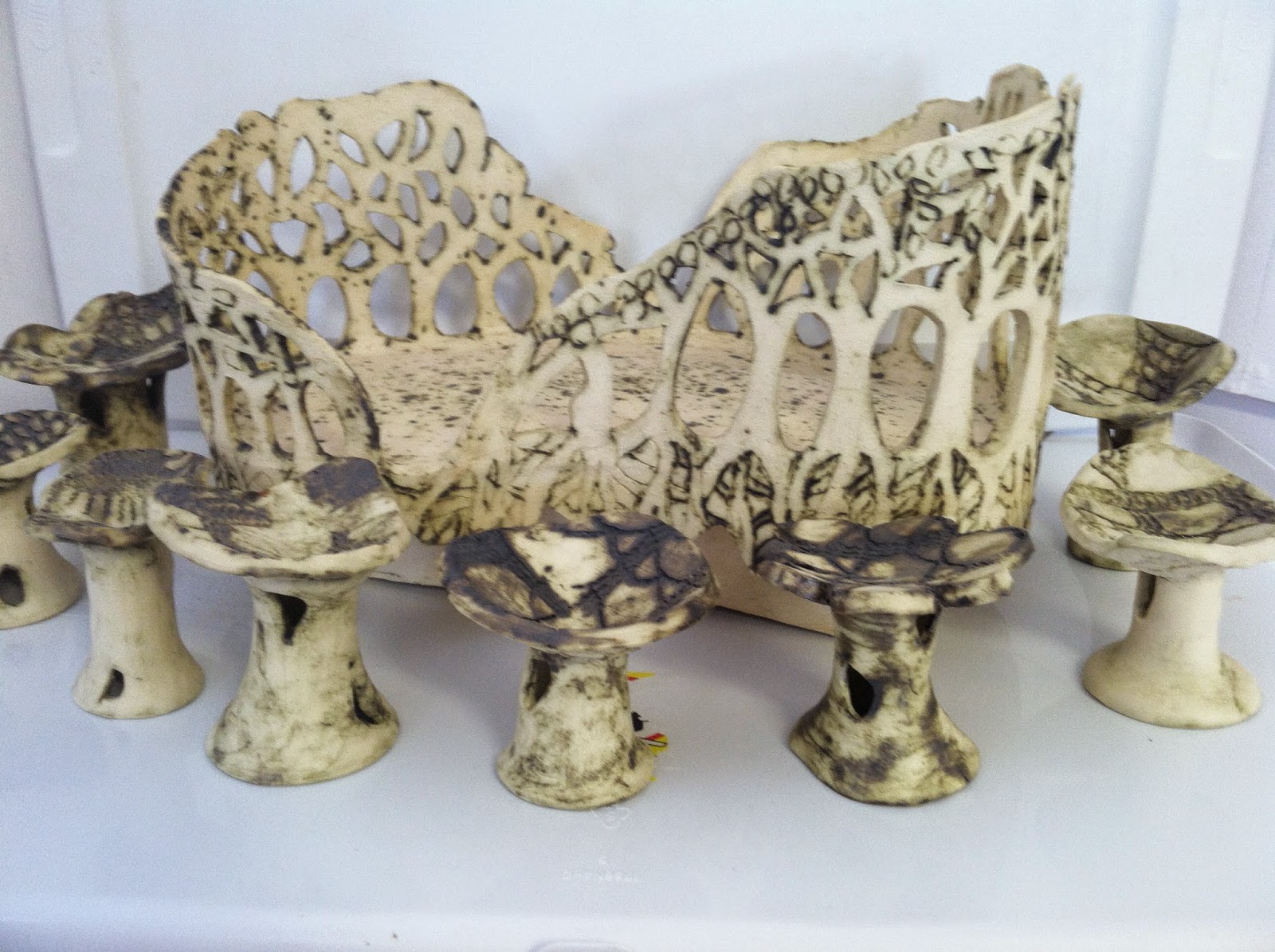 Or are they really mushrooms?
Posted by Barbara Rogers at 2:00 AM 3 comments: 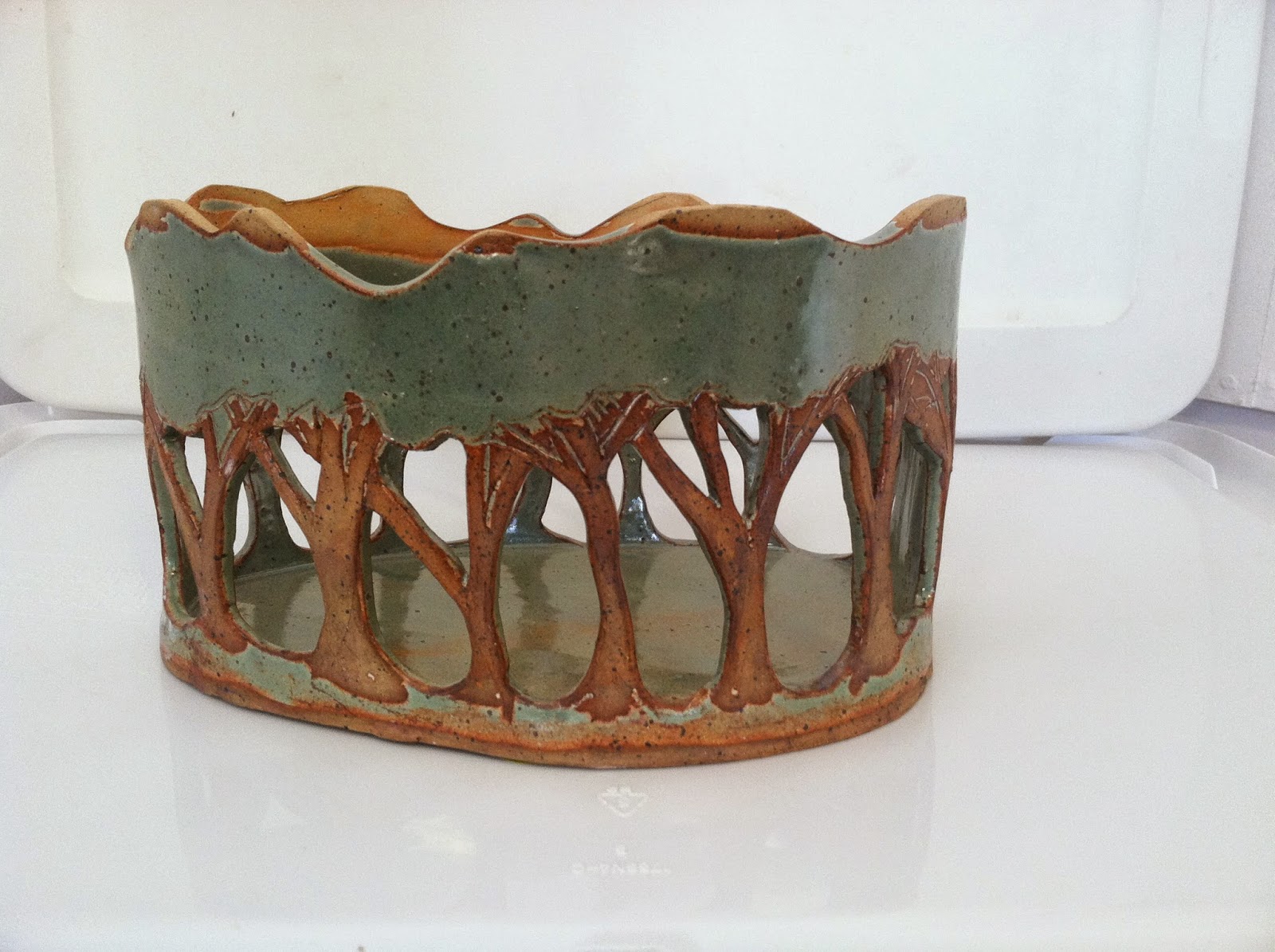 This time of year my creativity turns to sculptures, because my retail pottery sales are just about over with the holiday shows.

In the meantime, I do hope to make some space on my shelves for lovelies like this piece.
Posted by Barbara Rogers at 1:00 AM 2 comments: 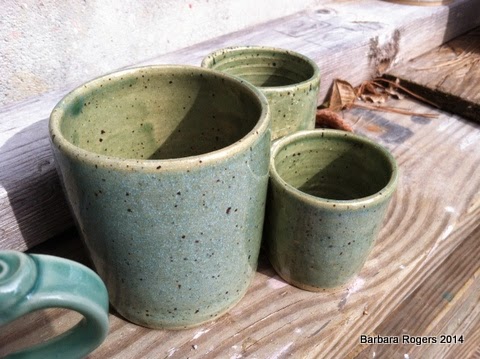 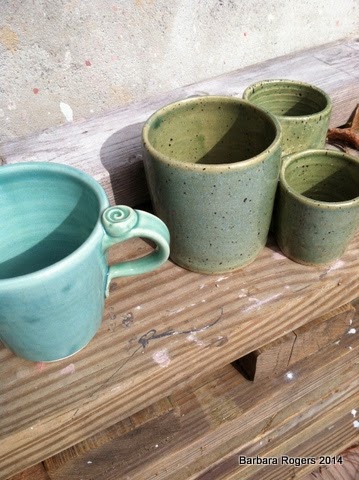 These all have the same "celadon" glaze one them, but the mug to the left is made of white clay, Little Loafers, while the set on the right are made with a stoneware, Speckled Brownstone.
Posted by Barbara Rogers at 6:41 PM 4 comments:

I MAY go to Highwater to pick up clay and glazes, if they have made the clay I'm waiting for (and so are some of my friends.)

I MAY pick up some more plate holders at A.C. Moore if I'm driving right by there going to Asheville.

I MAY have survived last night's Clay Club pot luck meet at the BMCA studio.

and I MAY have taken some photos of the fun...which even if only 3 of us were there, I am sure would have happened.  (I'm writing this before the meeting while waiting for cupcakes to cool before frosting the for the party.)

I MAY find the 2 little pots that I glazed earlier in the week are out of the kiln, thus I know whether or not the Celedo glaze is working again.

I MAY and for sure will be at the clay studio from 1-4pm as I am for Open Studio time every Thursday.

I MAY glaze the other little wonky pot that I know is somewhere lost on the bisqued shelf.

I MAY have some of my greenware loaded for the next bisque firing.

I MAY just put one foot in front of the other and at the end of the day sit here and know that life is good.

and I MAY make something new that I've never done before.

Do you know Don Reitz?

From his New York Times obit earlier this year...


Don Reitz, an internationally renowned artist in dirt and salt, died on March 19 at his home in Clarkdale, Ariz. He was 84. 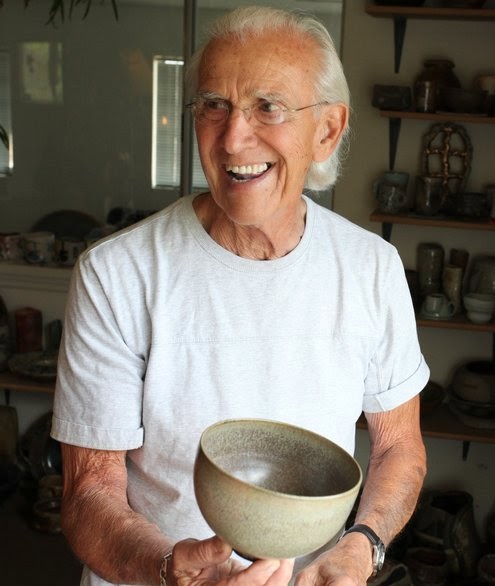 A ceramicist — with typical puckish pragmatism he preferred to describe his chosen medium as dirt instead of clay — Mr. Reitz was one of a small cadre of midcentury artisans who expanded the medium to include immense, intellectually provocative works of abstract art.

At his death, he was an emeritus professor at the University of Wisconsin, Madison, where he taught for a quarter-century before his retirement in 1988. His work is in the collections of the Smithsonian Institution, the Museum of Arts and Design in New York, the Museum of Fine Arts in Boston and elsewhere.

You may read more of that article if you wish, HERE.

He was known in particular for reviving the centuries-old technique of salt firing, in which salt added to a hot kiln yields textured surfaces far different from those made with conventional glazes.

Mr. Reitz’s style was characterized by “a kind of tension between a respect for classical pottery form and a really kind of brash, impetuous approach to working with wet clay,” Jody Clowes, the curator of “Don Reitz: Clay, Fire, Salt and Wood,” a touring exhibition of 2005, said in an interview on Friday.

Donald Lester Reitz was born on Nov. 7, 1929, in Sunbury, Pa., and reared in Belvidere, N.J. Dyslexic, he preferred working with his hands to schoolwork.

Enlisting in the Navy in 1948, he spent five years as a salvage diver and afterward plied a series of trades — truck driver, sign painter — before settling into a career as a butcher.

“In a way, it is an art,” Mr. Reitz wrote in a 1991 autobiographical essay in the magazine Ceramics Monthly. “You have to know how to cut and display your product, everything from putting bootees on lamb chops to arranging a crown roast. I could cut rosettes on a ham so that when it was baked, they opened up in beautiful patterns.”

But with time, he began to chafe among the meat. Enrolling at Kutztown State Teacher’s College in Pennsylvania, he studied painting; after earning a bachelor’s degree in art education there in 1957, he taught in the Dover, N.J., public schools.

Mr. Reitz had discovered ceramics in his last semester of college, and that, he soon realized, was his true calling. Installing a wheel in his house and a kiln outside it, he began making pots, which he attempted to sell at a roadside stand.

No one stopped until he also began offering homegrown vegetables. People bought the vegetables, and he gave them the pots at no charge.

From the New York State College of Ceramics, part of Alfred University in western New York, Mr. Reitz earned a master of fine arts degree in 1962. He joined the Wisconsin faculty that year.


Don Reitz taught in the University of Wisconsin–Madison art department from 1962 to 1988. In 2002 he received one of the highest honors in his field when the American Craft Council awarded him their Gold Medal.

But the proof is in the pudding (to use a really lame metaphor).  A University of Wisconsin publication about him (photo below) is now out of print. So we are having a short video of his firing an Anagama in Arizona with Charles Freeland (our manager) for the Clay Club party/meet on Nov. 12 at the Black Mountain Clay Studio.  Just wanted you to know a bit of what he was like, in case you didn't know yet.
Posted by Barbara Rogers at 8:49 AM 2 comments: