I'm taking three days away from the studio with lots of other folks this weekend.  I'm back into doing work, and threw 2 pitchers, a candle holding double handled vase-shape (much like the one above), and 5 tumblers with pressed-in designs.  I finished a dozen tree and goddess pendants yesterday, which are waiting to bisque, maybe tonight.

Have a great blue moon tomorrow night!  Howl, dance, sing, enjoy whatever moves you (as long as it's legal).

This post is part of the Mud Colony  what's happening in the studio; click on over to see what others are up to.

You are what you eat.

What are you eating? Do you imbibe that wonderful organic food, then slouch in front of mind-numbing TV or movies?  Is that food created so it can be shipped over a few weeks before it reaches it's ripeness?  Do you stay cocooned in air conditioning constantly?  Is the only water you touch chlorinated or bottled in plastic?  What kinds of chemicals do you cleanse yourself and your home with? How about the scents that you inhale, are they chemically created or natural?  Do you read things that inspire you or give you escape from reality?

Yes, I am definitely doing a few of those.  But I'm also going to a party of local entertainment, beer, and food.  It's LOCAL!  But if you're within 50 miles of it, you should come!  That's my circumference of local these days. 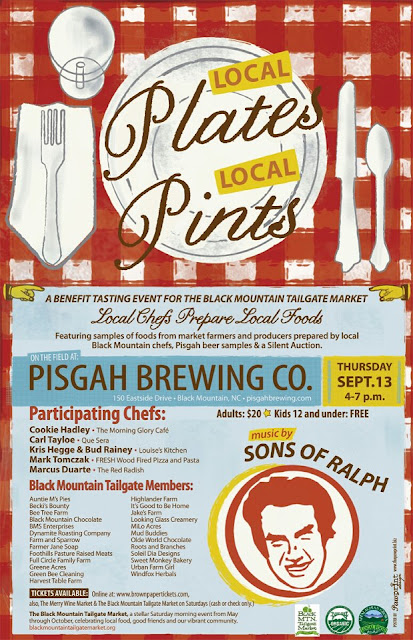 Exactly two weeks from today, a great party with live entertainment, selections of local beers, and chef-prepared foods that are grown locally...called the Plates and Pints.

If you live anywhere nearby, look up the directions to Pisgah Brewing Co, and drop by.  It's a fund raiser for the Black Mountain Tailgate Market...so $20 a ticket.  But you'd spend that easily for beer and dinner with entertainment anywhere.

And did I mention the silent auction?  Us Mudbuddy potters are contributing something that will also support the market.  I'll give you a hint soon!

The best things in life are nearest: Breath in your nostrils, light in your eyes, flowers at your feet, duties at your hand, the path of right just before you. Then do not grasp at the stars, but do life's plain, common work as it comes, certain that daily duties and daily bread are the sweetest things in life.

Posted by Barbara Rogers at 9:34 AM No comments:

the circle of abundance 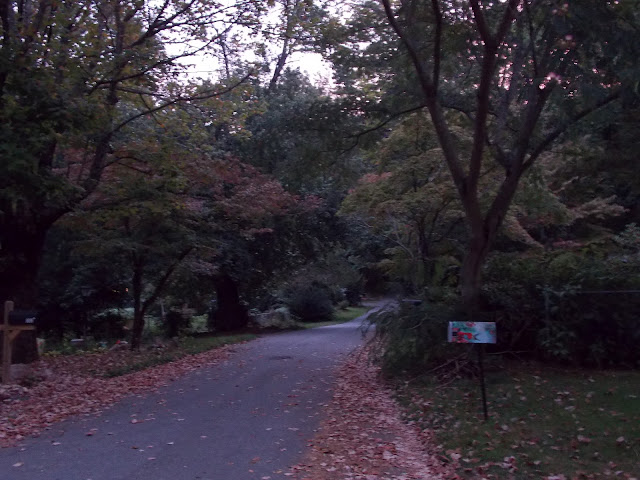 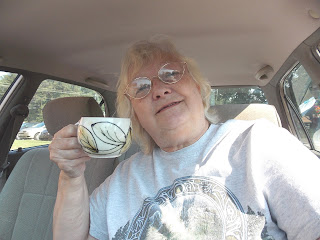 Doing the happy dance with bills in hand, we all hope they are multiplied many times over.  For all of us!

Those gorgeous flowers in my vase in the foreground were a birthday present from Cathy.  What goes round, comes round...seems to work!

For my 70th birthday, I'm giving each of my three sons and their family members, a commemorative plate.
I've called them Wishing Plates.  What I would want to wish for your birthday, or mine...and share with you! 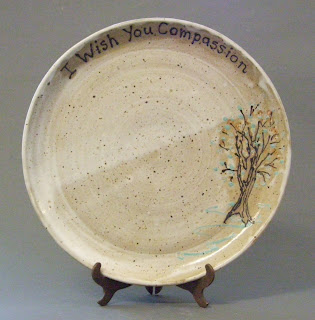 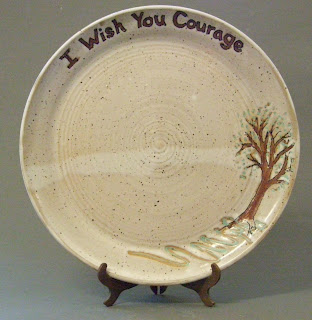 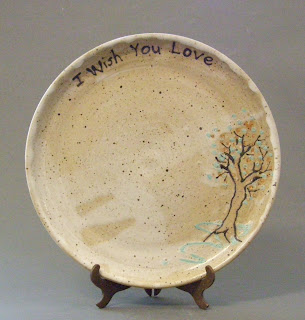 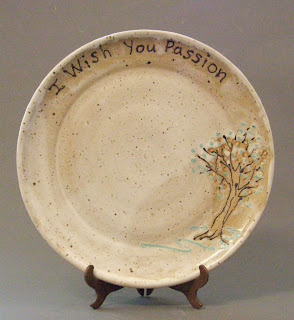 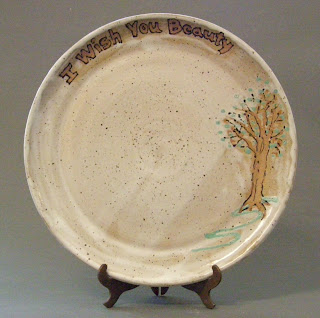 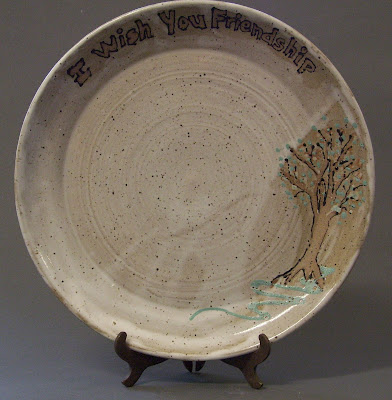 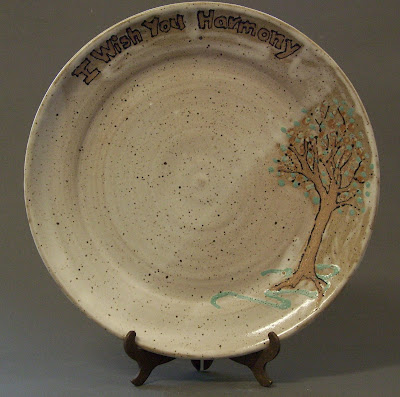 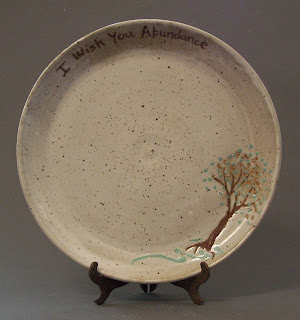 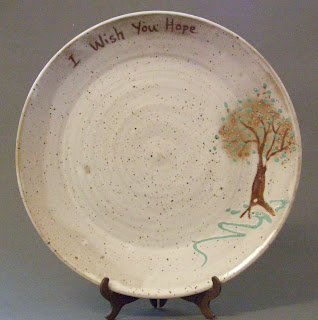 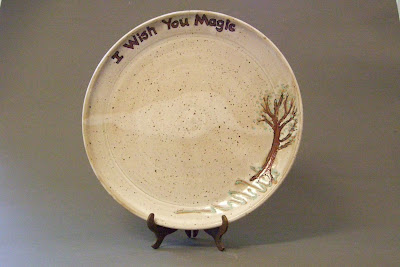 These are the first ones that are acceptable...but they aren't perfect, unfortunately.  I'm still learning, and this project gave me lots of humility.

A few more may come out of the kiln before I give them to family members.  I'll try to take their pictures and post them here as well.

I found that just putting wax on areas didn't mean the glaze would stay clear of them.  So I went through several extra steps before learning how to pour glaze quickly and shake the plates so the wax had a chance to retard some of the glaze.

And writing in simple letters was harder than I thought, because I had different amounts of curve on those lips.  Oh my, I really wish I could make every plate closer to being the same as every other.  But I probably won't do this again.  So it's been definitely a labor of ...

I have my work in a gallery!  As a sometime member of the Clay Club of Western North Carolina, I was pleased to join other members in displaying my pottery pieces at this show.

The big bottle with a lid is one of my pieces at The TRAC Gallery in Spruce Pine, NC.  The other piece is a vase with 2 handles. 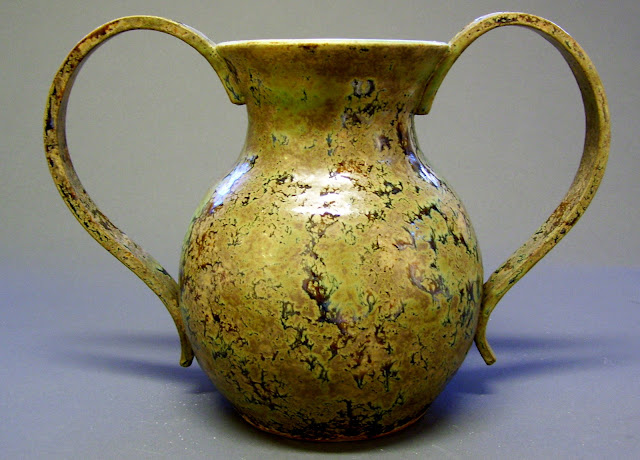 The color is more deep bronze tones than these yellowish ones.  I'm still working on my camera.

The opening last Sat. evening was a lovely party, with many familiar Clay Club faces.  I wasn't there in time to be part of John  Britt's video of the clay on display.
Clay Club pottery at TRAC Gallery

When I told my son I would like to have this on my resume, he scoffed, and said "A resume at 70?"

Thanks for reading and all your comments.  As I'm on the road periodically this week, it may take a while before I can post them.
Posted by Barbara Rogers at 12:30 AM 2 comments:

At this time of year, in the northern hemisphere, we've really had enough of fire...what with scorching weather and real forest fires that have been well covered by our news reports.  I hope that this finds all my readers without any detriment as a result of fire. 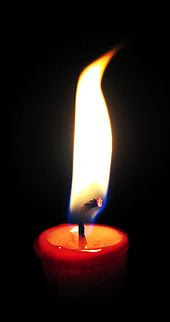 But the elemental nature of fire, especially in relation to pottery, is something that is to be desired.
Respected, and hopefully controlled.
Necessary to turn mud into stone hard pots. 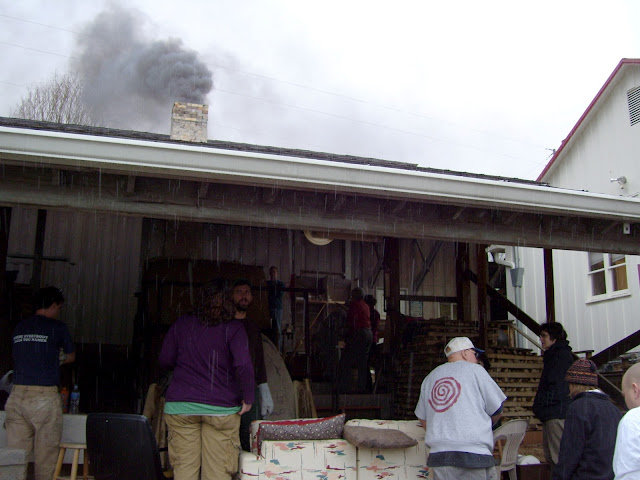 A wood fired kiln reaches a much higher temperature, and has many more variables than an electric kiln.

Since I want to focus on the element of fire, I won't go into more details about the various kinds of kilns and ways that pottery may reach its final vitrified state.

Back to fire itself.

Until then, perhaps you're a backyard chef, using some kind of grill occasionally.


Which reminds me of my ancestors (well, mainly the women who got to do most of the cooking, after all).  There were many centuries where our foremothers cooked all meals in fireplaces.  I'm so awestruck.  Have you tried boiling water in a fireplace?

But even before fireplaces, the tribes that predated the women in long dresses, there were women and men who had a pit with a fire to cook over...fire was one of the things that made the difference between our species and others.

And rites and rituals honored fire.  Our tribes (our ancestors were definitely tribal at one time)  would put out all the fires except one special fire, perhaps lit with a branch that had been burned by lightening.  Then that new fire would be passed along the community to be shared.

Fire is a blessing.  It comes sometimes out of the blue (lightening).  And it can become out of control.

Forest fire is needed for certain plants to regenerate, as my friend Rosie reminded me yesterday.  But she's also concerned about a nearby forest fire.

Today fire helps people gather for celebration.  Bonfires are traditions for a tribal type ritual which is held still by many people prior to a school having a dance, a football game, a pagan holiday like midsummer, or just for the fun of it.

If you've never sat around a campfire after the sun has gone down, staring at the embers, you have missed a really special moment.  There is a hypnotic quality to a fire, especially when you feel safe because it is under control.

People are skittish when fire isn't controlled well.  It can be dangerous, and perhaps of all the elements, we have a natural fear of it.  It goes very fast, for one reason.  It hurts immediately for another.  We can easily see the power it represents.

My pagan friends call the direction of south to represent fire when we have ritual circles.  This fits for us in the northern hemisphere where travelling south takes us to warmer climates.  But it also is the direction our sun shines from.

That is the source of all fire in our lives.

Thanks for reading and making your comments.  It may take a while for me to post them, but they will appear soon!

A quick video on a glazing technique that was shared on
Musing About Mud here a few days ago.  (If you haven't started seeing this blog regularly, you're missing a lot!)

Let me know if you try this out and how it looks, ok?  I talked about it at the Black Mountain community studio yesterday, and had a raised eyebrow interest. 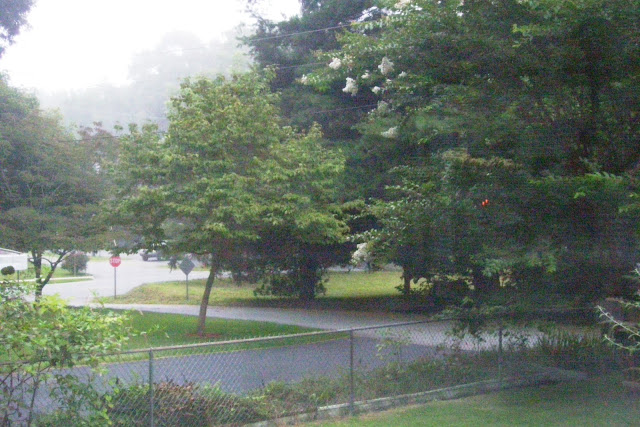 It is a totally grey beginning to the day.  Not clouds and rain, but the thing that can only happen in the mountains...living inside the cloud.  (Well, I guess fog can happen anywhere)  The tops of mountains, even the total mountains, have disappeared. 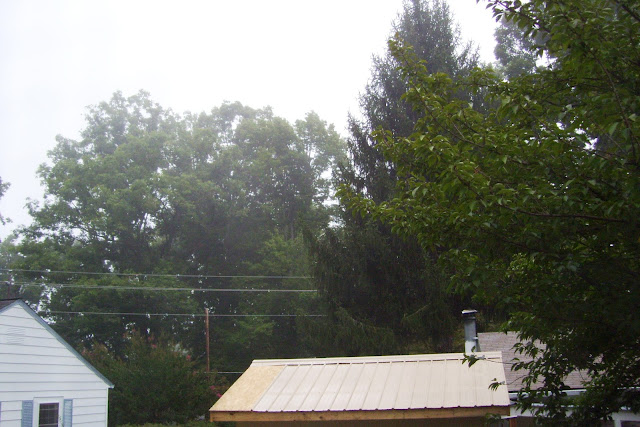 Yep it's garbage day.  Why would I post the can and the recycle bin picture here?  Well, how many people live on a dead end street that's so small the garbage trucks (2 different ones) have to back up the street?  You've got it.

So the grey day is upon me.  And I am full of cheerful spirits.  Enjoying breakfast over blogs.  Some days just start out so positive, even if the mountains are in clouds!
Posted by Barbara Rogers at 9:30 AM 5 comments: 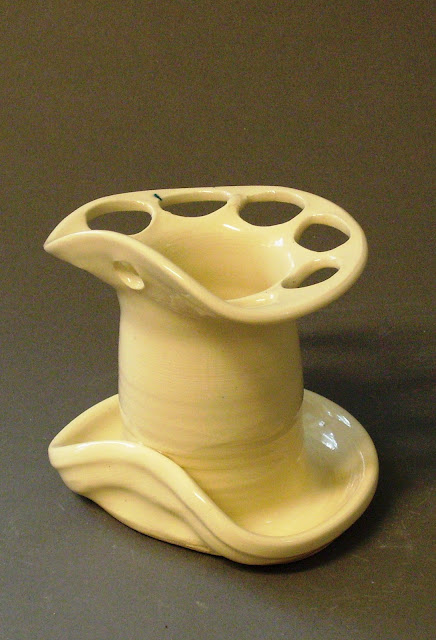 Unabashed plug for some useful items.

So when you have a nice counter by your sink, do you drop this and that around, or do you have an organizer?  Perhaps you've got those drawers, where you still have to shuffle to find whatever you're looking for? 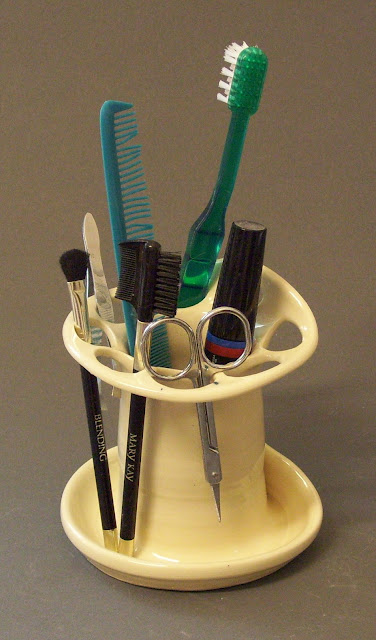 You can see how anything almost can be stored vertically, and drip harmlessly if it's wet when put in the holder. 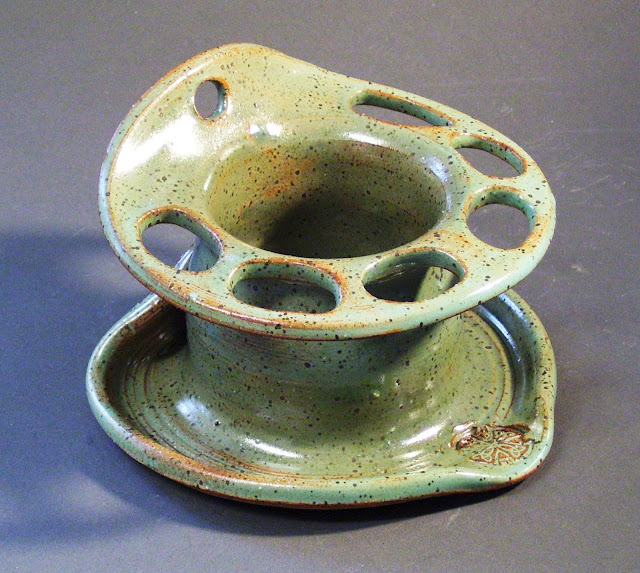 I confess I bought one for myself about 15 years ago, so the design isn't original.  I've changed it a bit, trying to make the toothbrush holes bigger for the bigger brushes we've got these days. 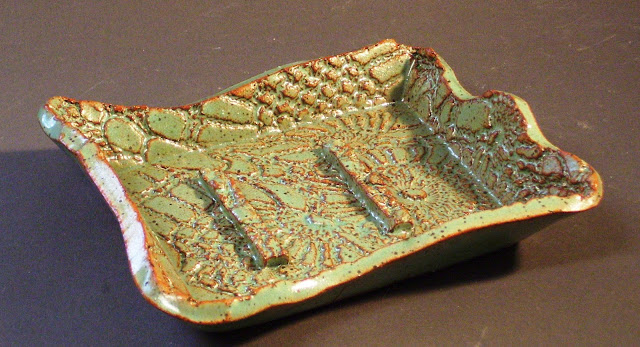 And even though almost everyone uses liquid soap in a pump, sometimes a nice bar of special soap is seen as well by the sink.  This soap dish has little raised bars so the soap won't stick to the dish, and will dry out nicely between uses.  It also looks really pretty like a piece of lace enfolding the bar of soap.

So, that's my simple bathroom furniture for this week, in several different colors, of course.

I showed some zucchini-cranberry bread at two functions this weekend on the low piece.  I love how the turquoise sets off the colors of food.

The glaze?  Our studio's selections of Mexico with Celadon over it.  Just poured over, or dipped in, not sure which way they were done.

Isn't it nice how the lace imprints have the breaking color from the glaze?  I was pleasantly surprised that something this simple could look so elegant.

And the best part of this is that beginners can make it.  A clay camp had lots of folks copying my idea a few weeks ago. Always glad to share.
Posted by Barbara Rogers at 12:07 PM 4 comments:

The Folk Art Center on the Blue Ridge Parkway

This is a volunteer's point of view.  I don't represent any of the organizations in authority, though I guess I am a Southern Highland Craft Guild volunteer.  The other organization involved in the Folk Art Center is the National Parks Dept.  through the Blue Ridge Parkway.

As you drive west on US 70, you see this stone overpass that is a key symbol of the Blue Ridge Parkway.


Please continue this post here...
Posted by Barbara Rogers at 1:00 AM 3 comments: