Out with the old

This bust was full of maternal emotions.  I kept it for years, though it had fundamental structural flaws...cracks across the forehead and under the eye.

So I have a few pictures left for my portfolio.  And I threw it away a few years ago.

I've had trouble doing this.  I have trouble throwing anything away.  After all I might sometime need just that thing.

Remember people who collect rubber bands?  Balls of twine?  Newspapers?  Nah, I don't bother with them.

I've got at least a dozen yogurt tubs (quart size) and another dozen other kinds of plastic tubs for keeping left overs.  (I hate left overs, so why do I plan to torture myself, I wonder?)  Well I also know eating left overs proves I'm a smart dietician.  I have a drawer full of yogurt container lids.

Posted by Barbara Rogers at 4:00 AM 6 comments:

These didn't get delivered in time for the Christmas extravaganza at my son's house on the 25th.  They may still be in one of those brown trucks as this is being read.  But I hope they all arrive safe and sound and are enjoyed by the family for many years.  (Incidentally the family said they will be sending me a "Valentine" family card, which was taken for Christmas)

Posted by Barbara Rogers at 3:30 AM 8 comments:

Now we could be using the verb form of present, to present something to you...but I'm not.
This time I have photos to present...of presents that are being given.  Or maybe I'm presenting presents.

ENOUGH, you're throwing things at your screen, screaming at my verbal theatrics. 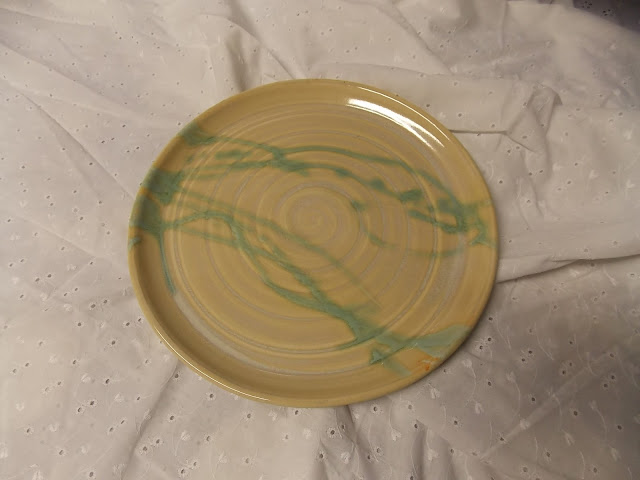 My friend, Teresa ordered a set of dinner plates.  Then she had to have a transmission put in her Jeep, so cancelled the order.  (I'd only thrown 3 at that point I think).  I said ok, then sat around moping, wondering what to do with the energy I'd built up.  A day went by.  A few days went by.  I couldn't do anything.  I read novels.

I finally called Teresa, and said how about doing a pay it forward thing, where you give me just a little toward the plates, and I'll make them, and you can pay when you can pay.

She said yes, gave me enough money to purchase the clay for 8 plates.  I made 5.  I showed them to her after the glaze was finished, just as she'd chosen from a sample small plate.

So I made the rest, they were fired in plenty of time, and I delivered them to her.

Her original idea was to give them to her adult children, saying they could then bring all these plates back together once a year for a feast with her family.  It was a good idea.

Then she said she wouldn't be having all 8 of the family members at dinner, which had originally been planned.

Many plans tend to do this, don't they?

A few days ago I realized I hadn't taken a picture of them, though they were in my house for weeks.  So yesterday she brought one back so I could make a digital photo to keep to remember the plates, one of many in my portfolio.

I think I make pretty good plates.  I haven't ever had one crack.  The glaze can sometimes give me problems...mainly from community studio issues.  But I'm not about to get my own kiln.

Teresa also gave me a lovely basket of fruits and a calendar for Christmas.  She said she knows when she has it, she'll pay me for the plates.  I know she will also.

The Black Mountain Center for the Arts has a clay exhibit in its upstairs gallery now.  Teachers and students' work from the Clay Studio are on display. 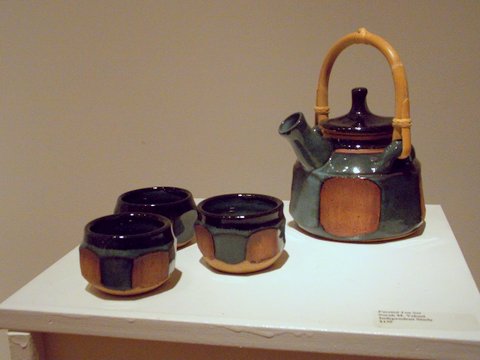 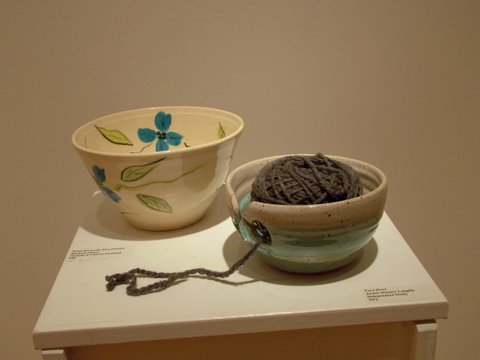 If you're in our neck of the woods (like Asheville, Spruce-Pine, Marion etc) here in western North Carolina, come and visit during the hours of 10-5 M-F, until Dec 21, and after Jan. 7. 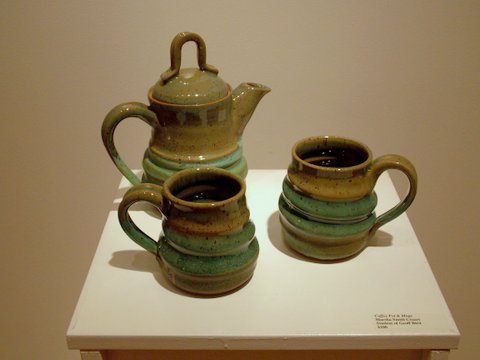 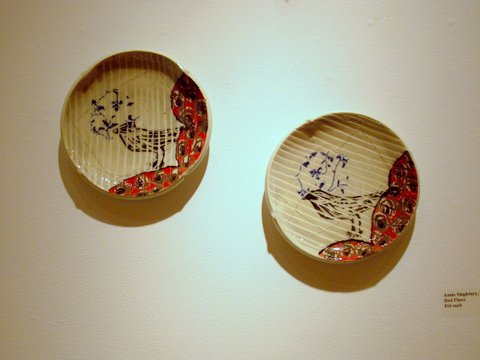 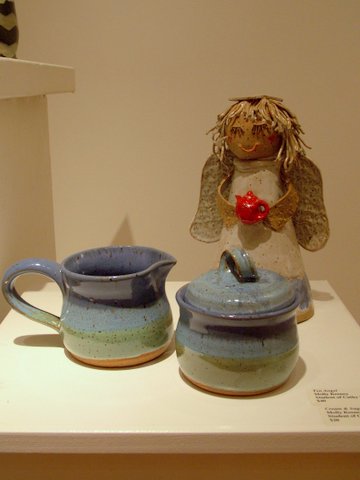 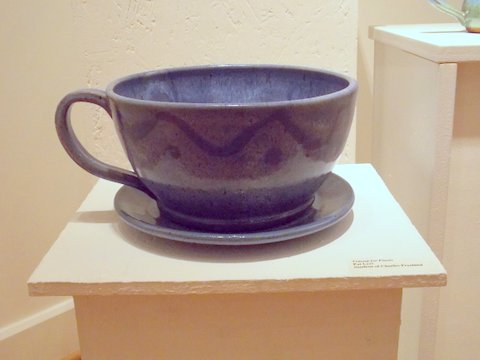 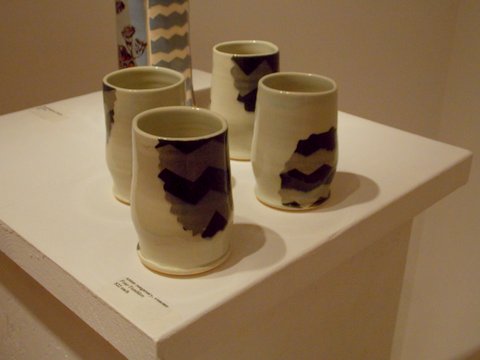 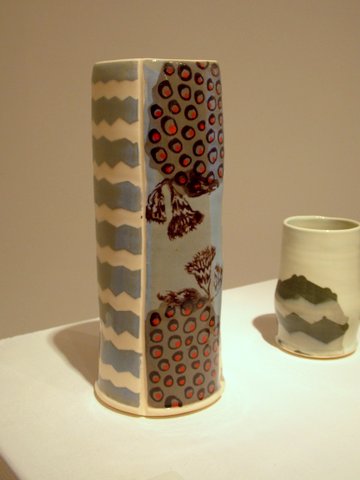 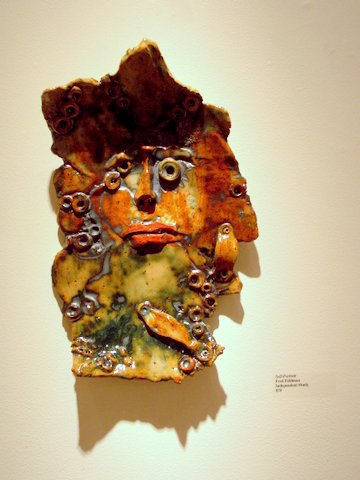 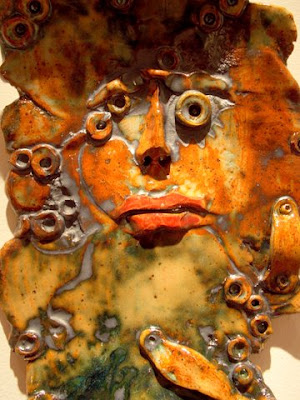 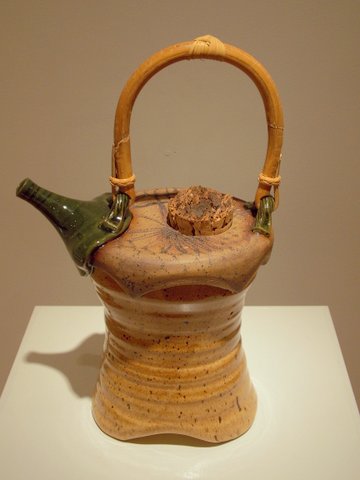 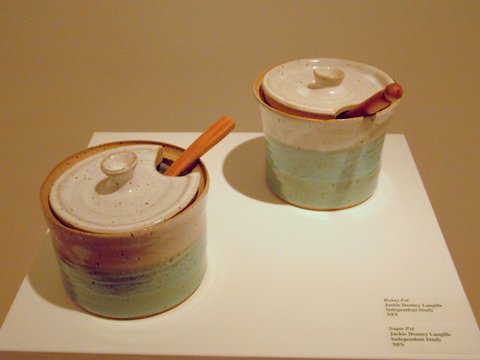 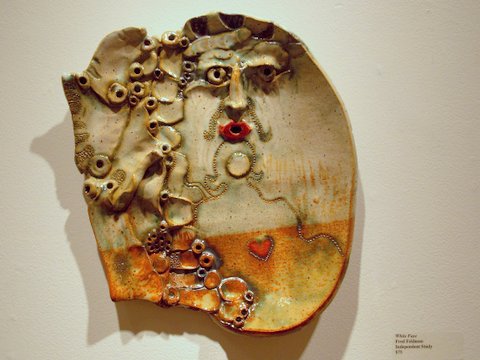 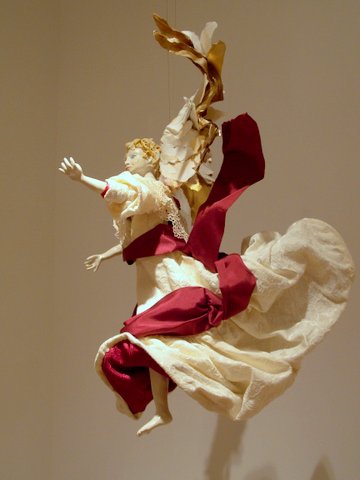 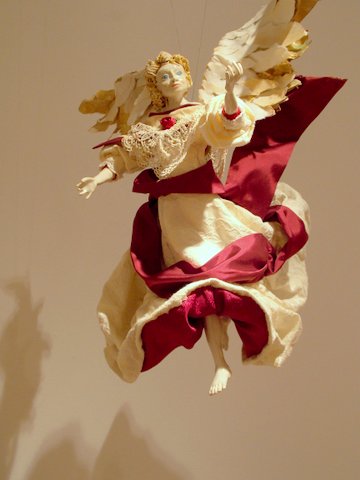 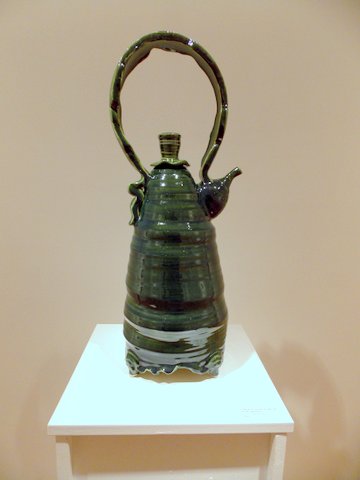 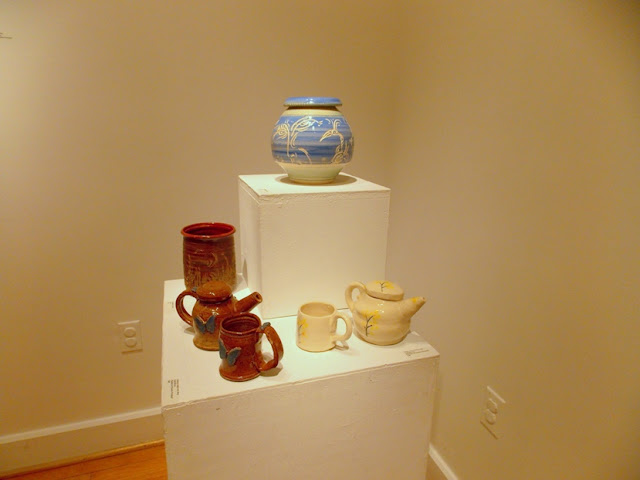 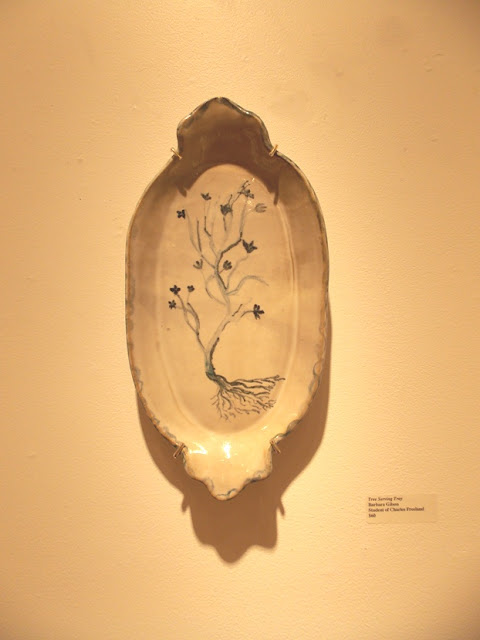 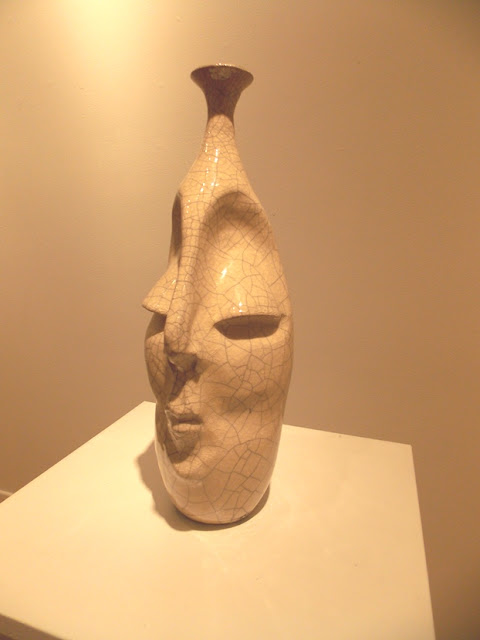 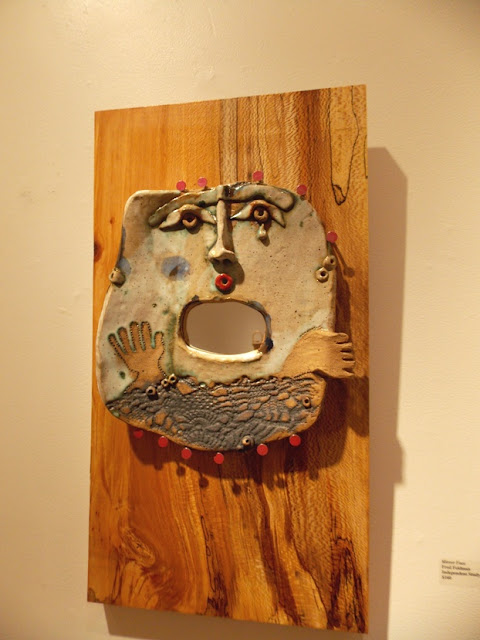 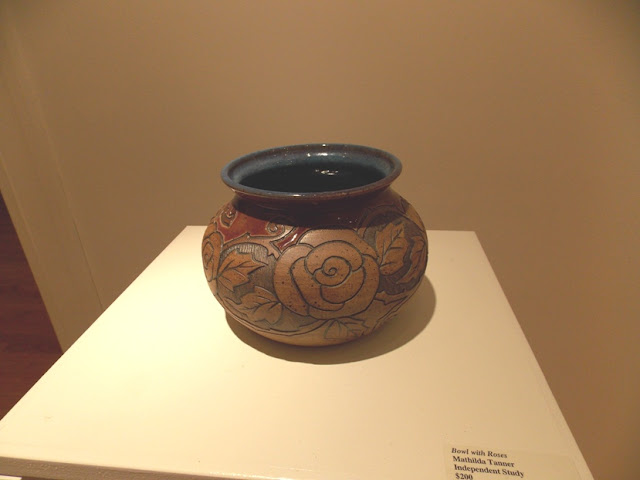 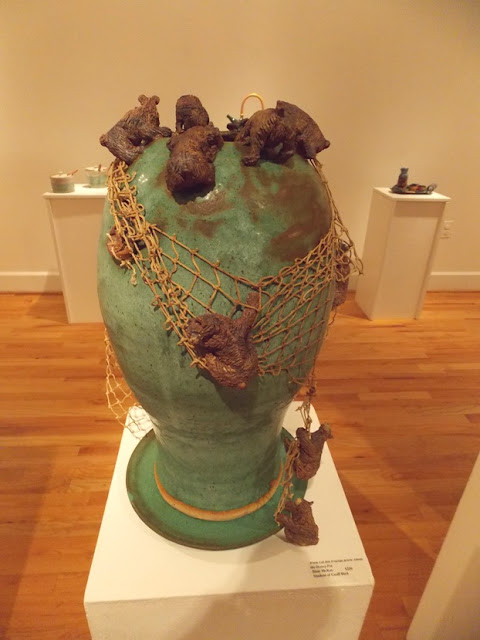 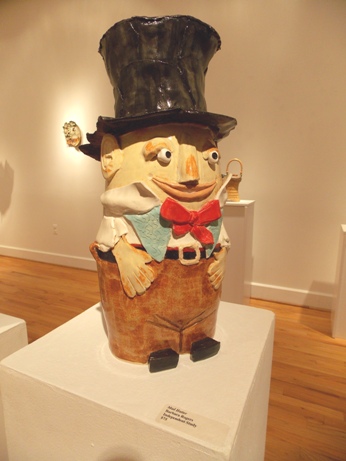 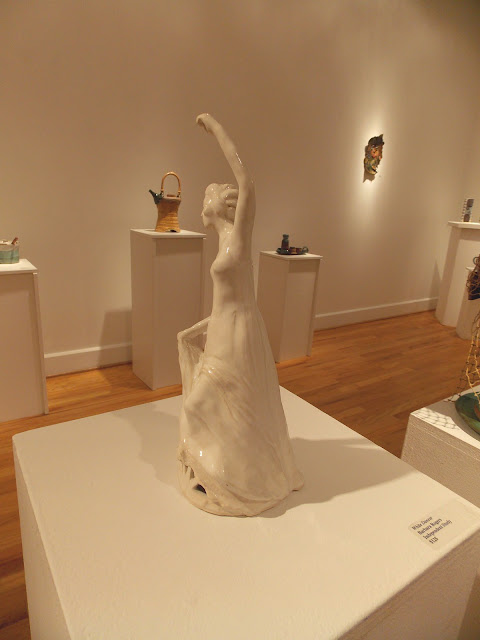 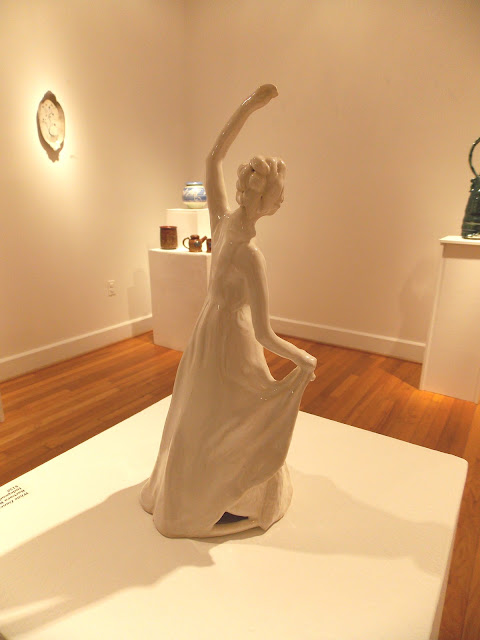 Posted by Barbara Rogers at 1:30 AM 4 comments:


The goal of life is to make your heartbeat match the beat of the universe, to match your nature with nature.  Joseph Campbell


The Black Mountain Center for the Arts pottery sale was fabulous for Holly Jolly last Fri. Dec 7, 2012.  Wonderful.  Fun.  Drink that mulled wine, hot cider, and munch on Marsha's pumpkin bread.  The room glowed with our own inner warmth.  (The weather cooperated also)

Did I mention that a portion of the sale items will remain available through January?  The bulk of the beauties will be gone by tomorrow, though.  Sales were steady, but not that great this year.  This is a fund-raiser for the Center for the Arts, as well as a way for students (and teachers) to showcase their work.


The gallery exhibit will be displayed in this blog later this week.  And it will be up till January. My camera was set somewhat wrong and everything is slightly red-hued.  Tried to correct in editing.

Posted by Barbara Rogers at 9:53 AM 5 comments:


Actually, the Mad Hatter won't be leaving for a while.  The show is up till Jan, and I don't think his new owners want him before Christmas.  But then again, I may be wrong.

I'm doing the happy dance today.  Remind me of this feeling the next time I'm groaning with the blues, will you?

More Holly Jolly pictures soon as I get over the headache from drinking that wine last night!  I should know better.

Shared with all of you and come on over to see other potter's works at  MudColony
Posted by Barbara Rogers at 11:28 AM 4 comments: