You've heard that before, in differing contexts.
Here I have had to accept that new carpet won't allow me to have my pretty little area rug (about 6x12) and enjoy the textures and colors and patterns it offers.

New carpet is strange, little loops that kind of give when you walk on them, without any padding underneath.  I hear the boards creaking when I step in certain places.
As many new things, it's done to please the eye, but not to really be comfortable or endure very well. 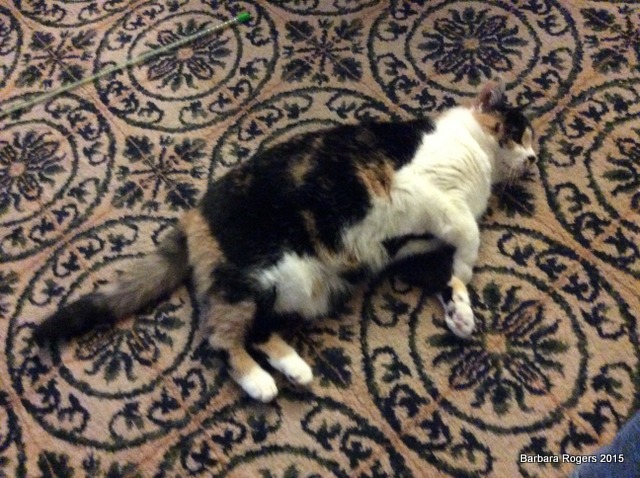 The strange thing is how those little loops shift the rug that's lying on top of carpet, so it has humps and it is pulled in one direction or another.  I've tried putting heavy things on it, but none of my furniture is ready to be out in the middle of the floor (more than normal like a desk chair, or a rocker and little coffee-type table).

After almost a month of tripping over the lumps and humps and pulling and pushing, and even kicking the rug to get it to stay in one place, I gave up and rolled it up and put it in the closet yesterday.  I've heard there are some rubber pads to keep things in place...but I don't have much faith in them.  Those little loops are going to give with each step and push the rug in a new direction.  And I do have a desk chair which I was constantly moving around in.

Sorry Panther, you will have to get used to having a scratching post rather than scratching on the rug.  Please, Panther, don't scratch on the little carpet loops! 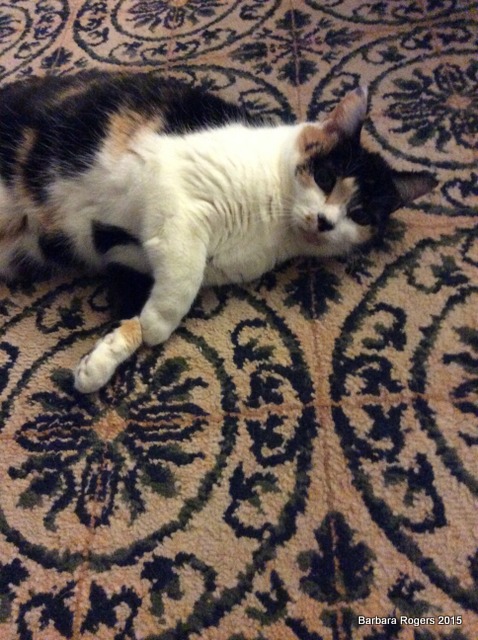 Any advice on how to get a cat to use a scratching post?
Posted by Barbara Rogers at 9:18 AM 9 comments: 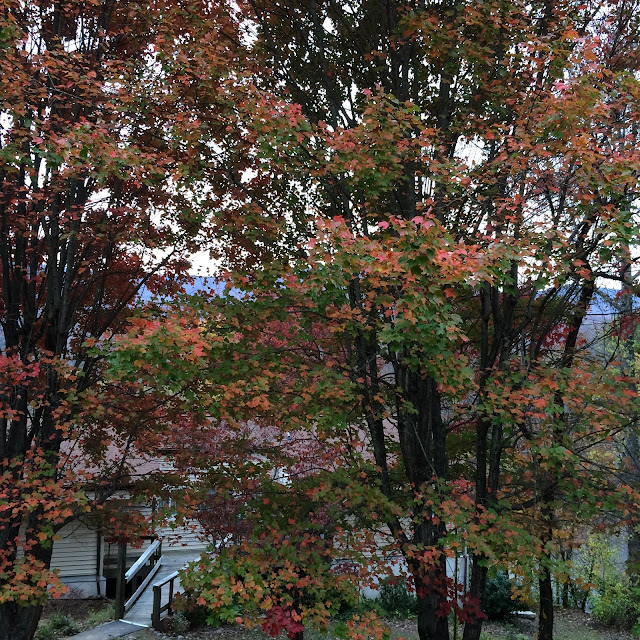 Peak of colors in Black Mountain 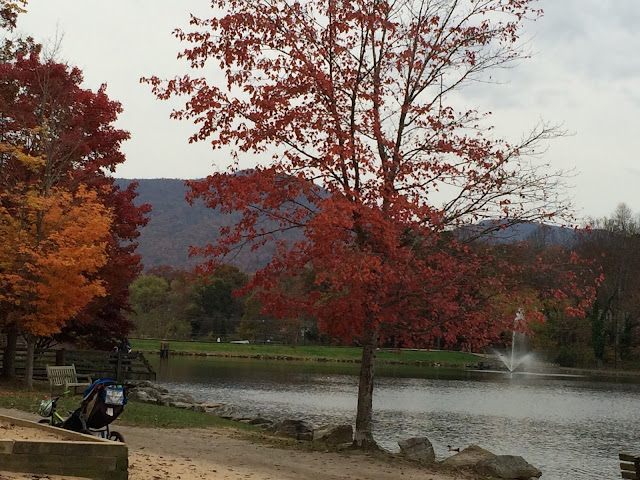 The sun had already disappeared when I went riding around to see what was left of colors.  I've been way too busy to be a tourist this year!

And I knew the next 3 days would bring steady rain, so this was IT.  My one chance to capture some of 2015 autumnal colors. 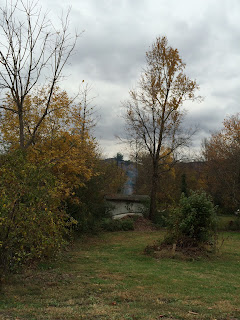 OK, you want me to acknowledge that the peak has passed, right? 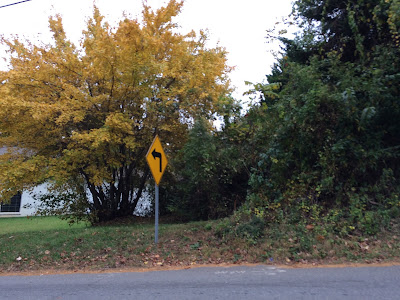 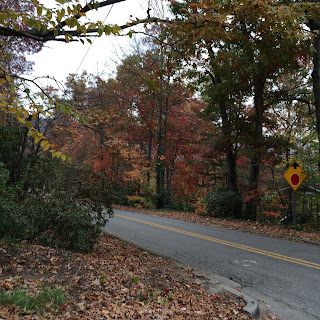 I'm grateful for what I can get! 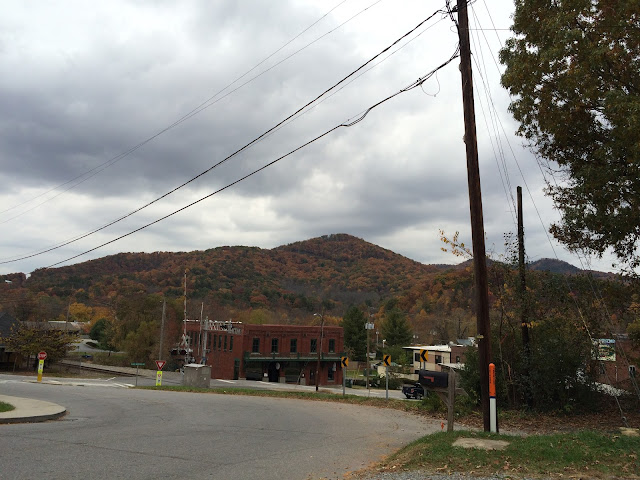 Posted by Barbara Rogers at 2:00 AM 2 comments:

The original recording by the Obernkirchen Children's Choir
(source Wikipedia)
"The Happy Wanderer" ("Der fröhliche Wanderer" or "Mein Vater war ein Wandersmann") is a popular song. The original text was written by Florenz Friedrich Sigismund (1788-1857).[1][2] The present tune was composed by Friedrich-Wilhelm Möller shortly after World War II. It is often mistaken for a German folk song, but it is actually an original composition. His sister Edith Möller conducted a small amateur children's and youth choir in Schaumburg County, Northern Germany, internationally named Obernkirchen Children's Choir, in Germany named Schaumburger Märchensänger.[3] She adapted Sigismund's words for her choir.[1]

In 1953 a BBC radio broadcast of the choir's winning performance at the Llangollen International Musical Eisteddfod turned the song into an instant hit. On January 22, 1954, the song entered the UK singles chart and stayed on the chart—only a Top 12 at the time—for 26 non-consecutive weeks, peaking at Number 2 (for five consecutive weeks). With the BBC's strong international influence "The Happy Wanderer" turned up everywhere, e.g., as the winning song of the 1955 calypso road-march season of the Trinidad Carnival. People protested after this event and complained that only calypsoes should be chosen over foreign music.

The amateur choir, many of whose original members were war orphans, turned into an unlikely international phenomenon in the following years. The group performed on many international tours under the name Obernkirchen Children's Choir and recorded several albums. They made two appearances on The Ed Sullivan Show (November 29, 1964, and December 11, 1966).

Die Isarspatzen, Herbert Beckh und das Tanzorchester des Bayerischen Rundfunks have also recorded a German version. That version was made in Munich on June 16, 1954. It was released by Electrola Records as catalog number EG 8073.

The song's German lyrics have been translated into several languages, and it has since become a choir classic. The first adaptation into another language was done by a Belgian woman, Andrée Mazy, who came up with versions in Dutch-Flemish and French.[4] Since in Dutch folk songs "valderi-valdera" (pronounced "falderi-faldera") is more common than the German "falleri-fallera", she used the Dutch model in both versions.

When Antonia Ridge was writing the English lyrics,[5] she became acquainted with the French version of the song, with "valderi-valdera", pronounced with a true soft /v/ instead of the voiceless /f/, and borrowed it over into the English version mainly for euphonic reasons (less military sounding).[6]
Milton DeLugg wrote a noted arrangement, and is sometimes incorrectly credited as the composer of the song.

A number of English-language sources credit Edith Möller and Florenz Siegesmund with writing the words, the implication being (apparently) that they were written at the same time as the tune. However, the German sources all credit the original words to either Friedrich Sigismund,[7][8] F. Sigismund,[9] or Florenz Friedrich Sigismund[2] and give the dates as either 1788-1857 or early 19th century.[10] All German sources agree that the words to the popular version were adapted by Edith Möller.
******************
I never got a good answer as to the meaning of Varderi - Valdera.  There is a region in Italy near Pisa named Valdera.   Not likely to be included in this German song.

I do love how it's an international favorite of hikers, along with (groan) Kumbaya!

Thanks for reading today!

Here's a quote, since I forgot one yesterday:


Do not be small minded. Do not pray for gourds and pumpkins from God, when you should be asking for pure love and pure knowledge to dawn within every heart. Sri Ramakrishna Paramahamsa
Posted by Barbara Rogers at 1:00 AM No comments:

My Art on the Lawn experience

Being outside for 8 hours didn't used to be anything to make my body complain.  But oh my, the last 2 days make me think how very frail I've become.  Drat and darn.  First let me say -  I am really grateful to have been allowed to join in the Swannanoa Valley Fine Arts League and be part of this show. 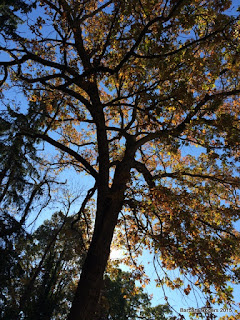 First day, sunshine, glorious sunshine.  Wonderful weather for walking or driving and seeing the trees in the woods, which are at their peak right now.  But sit in it, even if only the last 3 hours were actually beaming hot sun on our faces, on my gracious, I am no longer a beach goer.  Nor an Art Show artist apparently. 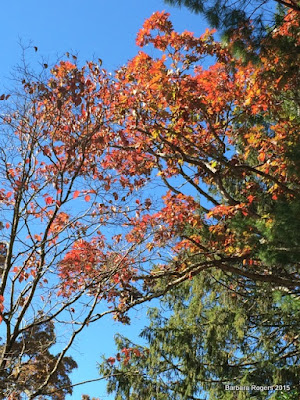 Second day, clouds, so nobody's going to complain about the sunshine, right?  Well, we happen to have a steady stream of cold air coming down the valley from Mt. Mitchell, or some other cloud enshrouded heights.  It just seeps through clothes and into your bones and muscles.  People who jump out of cars, or leave warm homes, are fine for a half hour or so in 60-65 degrees of the chilly air.  There wasn't a wind either. If you're working or hiking you can sweat in it, and then you've got something else to add to the cold whenever you stop.  But try 8 hours of it, and I soon discovered the thing to do is to walk around 5 minutes of every hour.  At least for me that made the difference.  I still went home and collapsed with a chill that brought fever for a couple of hours, bundled up and taking Tylenol. 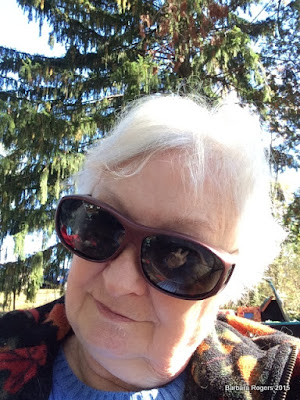 But I've bounced back, and now it's Sunday.  My day of rest and relaxation.  Boy I need it!.

Now to be more of a reporting blogger, here are my pictures from Friday, since Sat. I didn't feel like taking any. 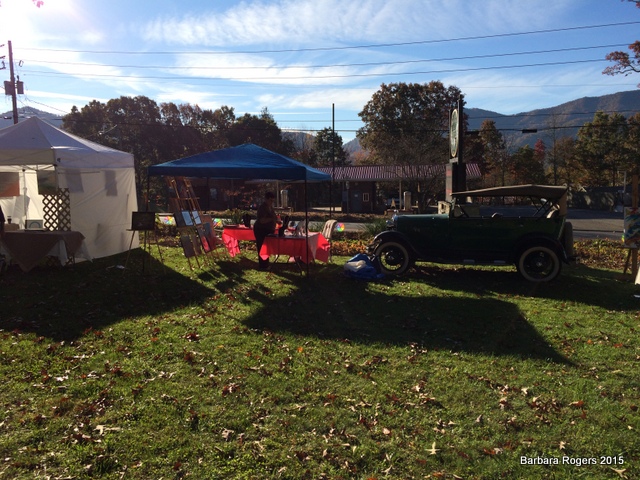 Great looking tents in front of the Monte Vista Hotel...the antique car is always there. 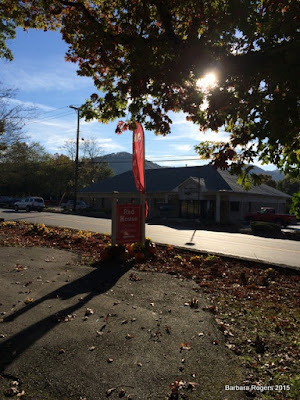 My site was in between the parking lot and the Red House, next door to the Monte Vista. 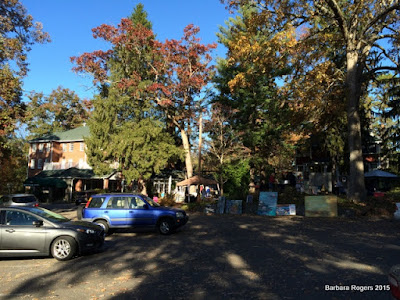 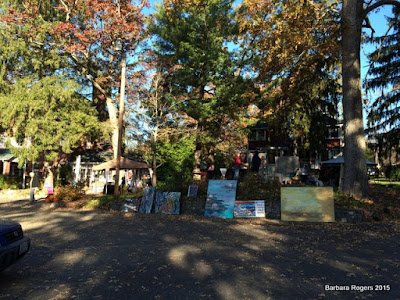 Also on the parking lot, a pleine air artist added his touch to a tree. 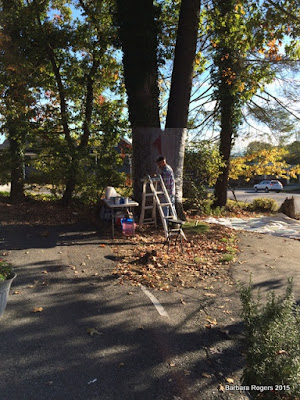 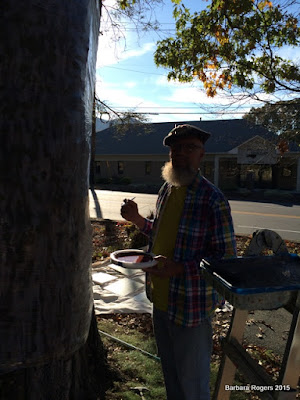 After all, art can be advertising for art. 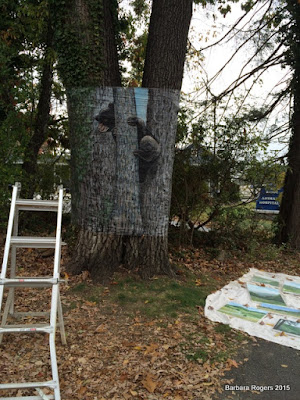 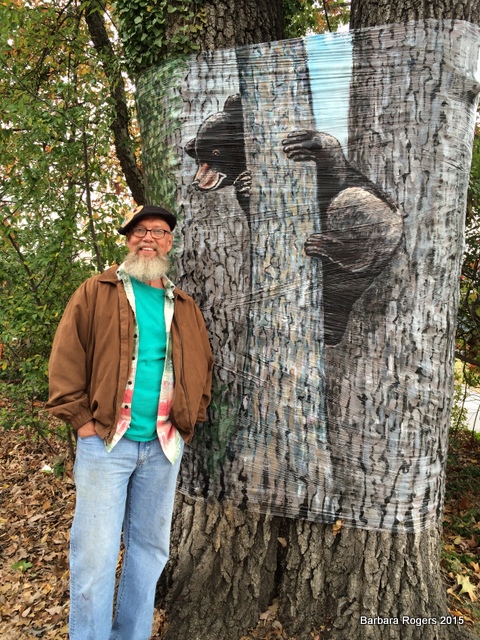 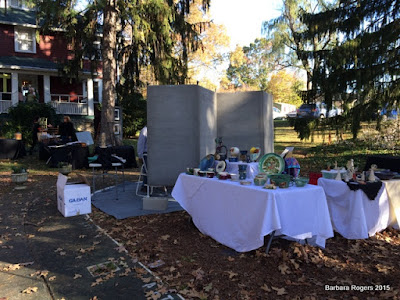 My site was actually sitting upon the old swimming pool site.  No Diving Signs are still on the sidewalk. 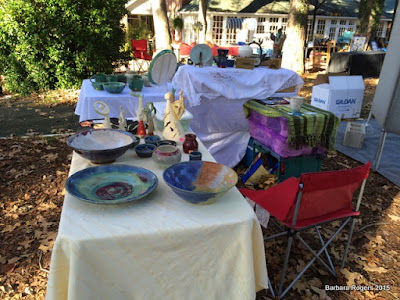 I had a great view!  That's the Monte Vista dining room down the hill. 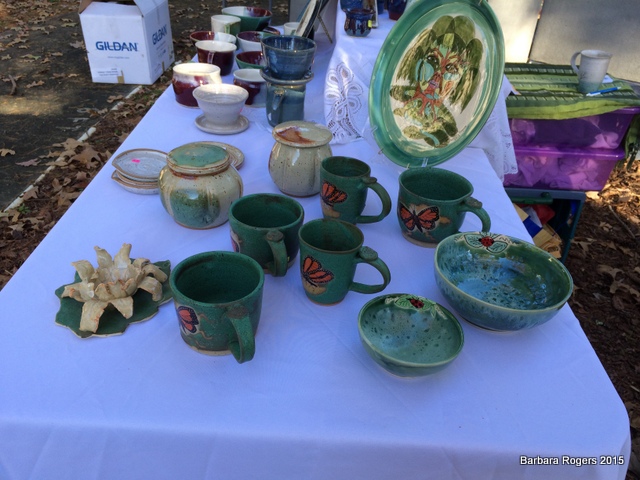 I had a couple of sales each day...and am very grateful for a friend who came by and made a nice purchase.

But was it worth it?  If my old bones could have just been like they were 20 years ago, or even 10 years ago...maybe yes.  I'll have to seriously think about doing more outdoor shows.  And doing more exercise so my muscles don't just sit at a computer or potter's wheel, or doing fine glazing details all day!  And of course this 2 day event was at the end of a particularly stressful week for me...that won't happen again I hope.

So hard to get up and go to work.
You all know the feeling.  No words can quite equal how you push yourself.
There's something to do, that must be done.
And only you can do it.

Work today is a second day at Art on the Lawn at Swannanoa Valley Fine Arts League...at the Monte Vista Hotel on State Street.

I was very discouraged yesterday.

So this day will be better.  Not hard to do. 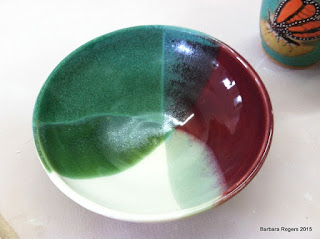 Posted by Barbara Rogers at 8:46 AM 5 comments:

Retail me and playful me

Well, since this blog is often my journal, I'll write myself a letter.
Yesterday I was all caught up in physical and artistic conundrums.

Today I've been replenished by a poet's kind words about Elemental Blessings for a Home.  Mamie and I spent a little time planning my new apartment's House Blessing.  It just fell into the right plan, and I'm so looking forward to sharing with all my friends.  As many as can fit in the apartment!

And I'm remembering I can do this retail gig.  And I can have fun doing it.

So I'm spending thesenext two days outside in the sunshine and fresh air, and will have some of my pottery on display.  Other Mud Buddies will be also showing some of my pottery at the Black Mountain Tailgate Market.  I hope some of it goes home with other folks who may appreciate it in one way or another.

But for me, it's all a game.
Let's play store.  I used to have a cash register toy.  What fun that was.  (Of course it's like play phones, these days kids won't know how a cash drawer opens with that ding, any more than they'll know what a rotary phone toy is.) 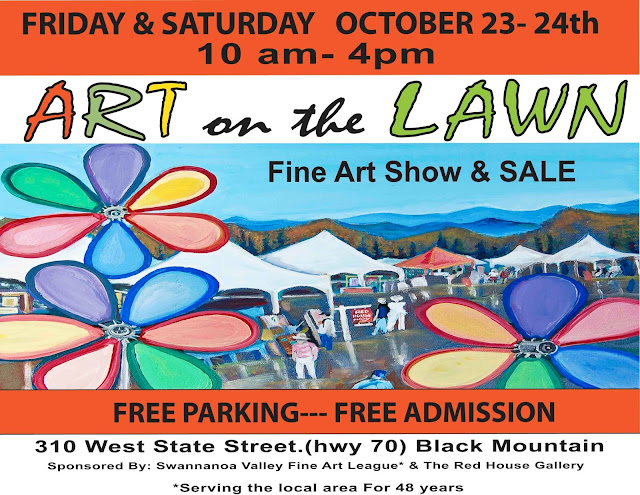 When we give cheerfully and accept gratefully, everyone is blessed.


Maya Angelou
Posted by Barbara Rogers at 1:00 AM No comments: