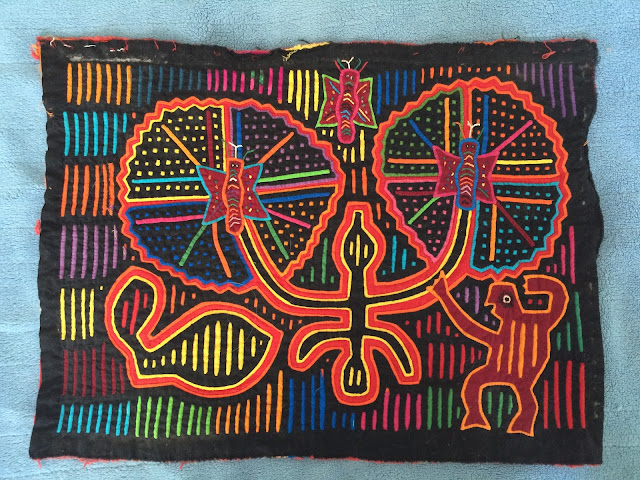 Molas—the colorful appliqué patterns of the Kuna Indians—originated in the San Blas Islands of Panama. The mola or molas, forms part of the traditional outfit of a Kuna woman, two mola panels being incorporated as front and back panels in a blouse. 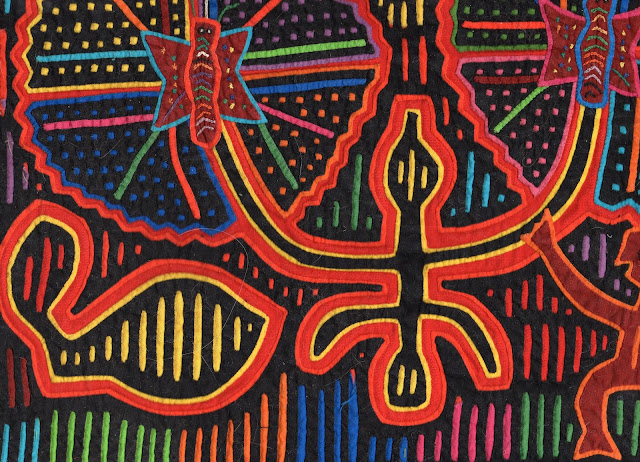 My mola was purchased in a kiosk in a shopping mall in the 90's.  I also bought an embroidered T-shirt. 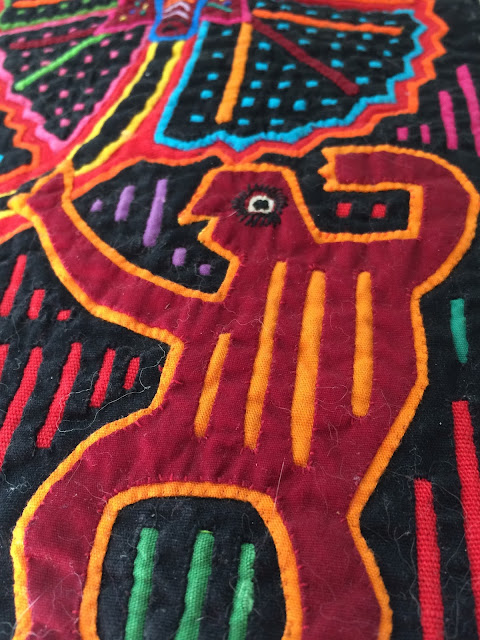 In Dulegaya, the Kuna's native language, "mola" means "shirt" or "clothing". The mola originated with the tradition of Kuna women painting their bodies with geometrical designs, using available natural colours; in later years these same designs were woven in cotton, and later still, sewn using cloth bought from the European settlers of Panamá. 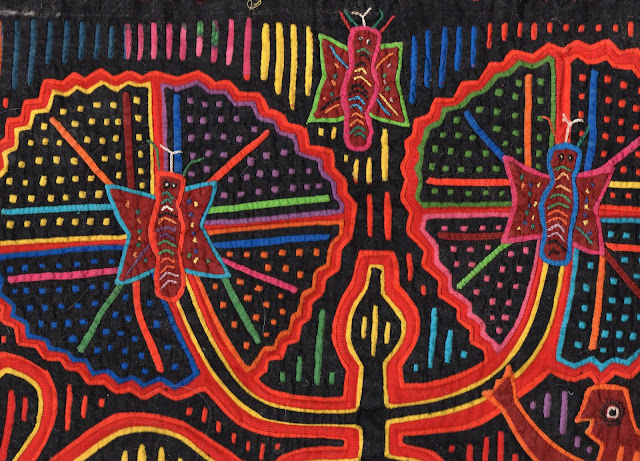 A layer of cloth, cut through from the black topping to the next colorful layer, with the edges stitched down.  But there are also added pieces appliqued onto the fabric with embroidery added. 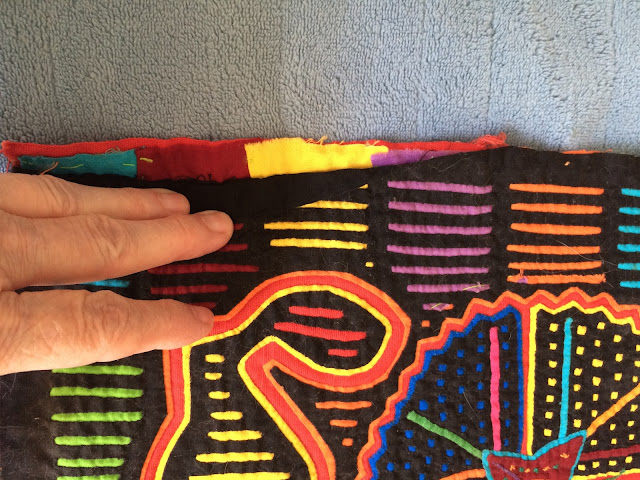 The subject is certainly confusing to me.  A person on the lower right perhaps.  A whale shape on lower left, with a anthropormorphized being in the center with long arms going up to floral patterns with a butterfly in the center.  I'll go with it all being about nature! 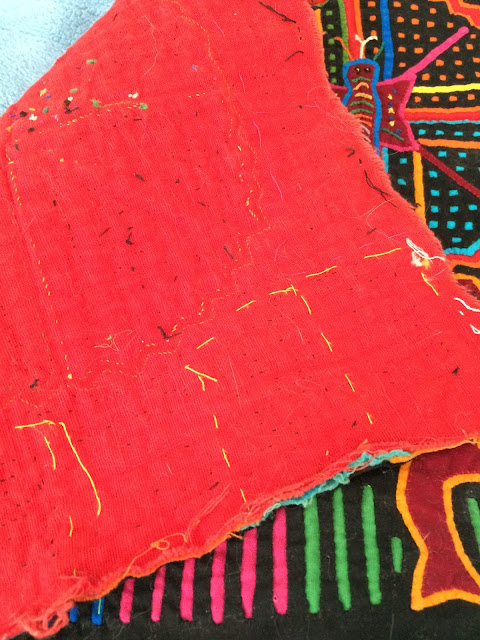 Molas have their origin in body painting. Only after colonization by the Spanish and contact with missionaries did the Kuna start to transfer their traditional geometric designs on fabric, first by painting directly on the fabric and later by using the technique of reverse application. It is not known for certain when this technique was first used. 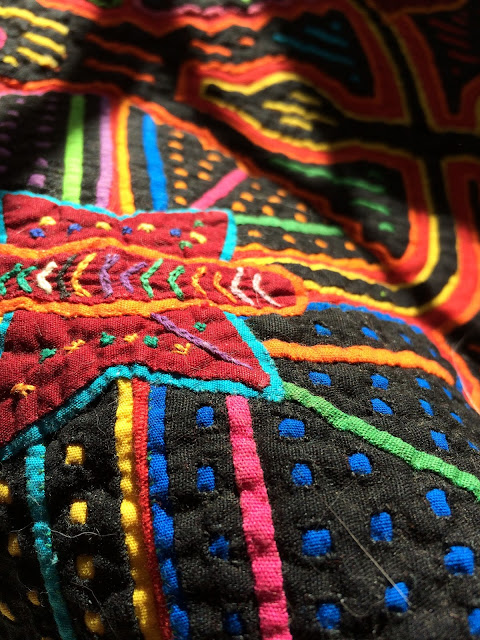 PS: Below is my T-shirt, which has lived a good 30 years.  Pretty good for 100% cotton. And I've machine washed it all that time, when the tag says "dry clean." It also says it was made in Guatemala.  I do enjoy the embroidery (machine done probably). This technique incorporates a piece of cloth inserted under the embroidery to make it more three-dimensional. In some places the white cloth shows through the stitches. 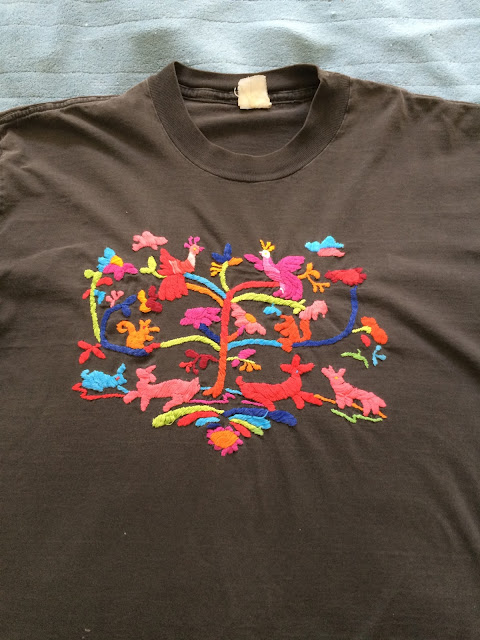 Nothing contributes so much to tranquilize the mind as a steady purpose - a point on which the soul may fix its intellectual eye.  Mary Wollstonecraft Shelley

One of the places I find inspiring

This lovely quiet river surprises everyone by completely disappearing a half mile downstream, into a "sink."  It comes out later and continues on it's way to the Gulf of Mexico.


If you go upstream from the bridge, you can canoe along the slow moving river.  And in summertime there's a swimming area as well, if you don't mind a bit of tannin in the water.

The last time I visited the park, I stayed overnight and attended a workshop during the winter-time.  There are little cabins available for that, as well as a large meeting hall.

Laughing is the shortest distance between two people. Victor Borge

I started with hand building, using slabs to create 3 trees (here waiting to be bisque fired). 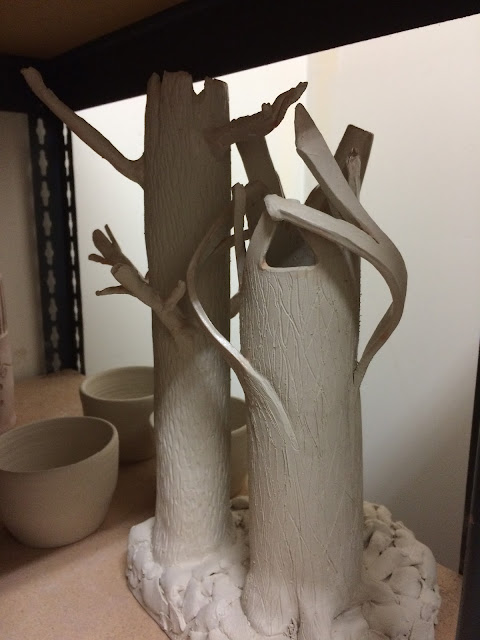 Right behind them are 3 small cups, which I threw on the hump on the wheel...meaning one lump of clay which was centered, throw one cup, the first cup cut off with a wire, then another cup thrown, cut off, etc. 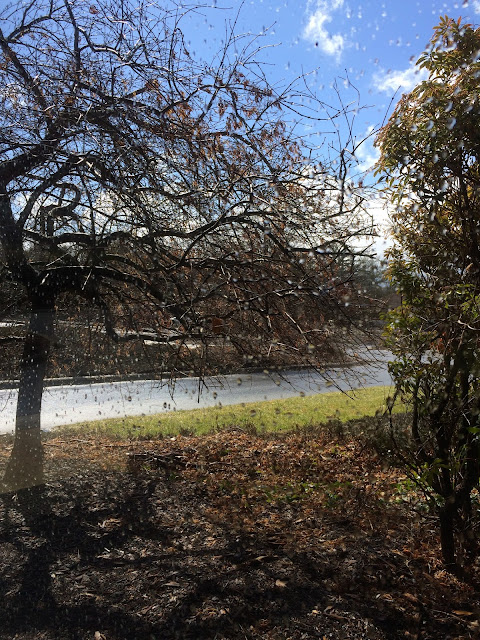 After driving to Asheville through stormy rain and wind, the sun came out.  Here the window of my allergist's office shows how rain hit it by all the wet drops remaining, but the sun and blue sky show the storm had passed over (for a while at least.)

Our weather has kept us wondering what's going to happen next all week long.  Spring and winter are certainly in a struggle around here.


“In the woods, we return to reason and faith… Standing on the bare ground – my head bathed by the blithe air, and uplifted into infinite space – all mean egotism vanishes. I become a transparent eye-ball; I am nothing; I see all; the currents of the Universal Being circulate through me…”
~Ralph Waldo Emerson, Nature, 1836