I enjoyed following my eyes around the Convention Center in Hickory.  It wasn't until the next day that my lower back said I'd been walking on that concrete floor for a couple of hours.  But it was certainly worth the hour's drive over to Hickory from Black Mountain, NC.

I immediately thought "Rookwood potters" with the tree designs reminiscent of the Art Neuvo era.

I was impressed with the lifelike crows in the Jugtown Pottery display.

There were quite a few face jug pots throughout the show, maybve a 10th of the displays.  I wasn't really interested in face jugs, so won't be showing you any.


My friend introduced me to one of her favorite potteries, the Parmentiers.  This double booth featured some large well made pieces, all of which were glazed in subdued satin finishes.

This final picture is a design which I would like to try making.  A three sided planter, carved on exterior,  with a bird on each angle.

Remember me painting all those ladybugs? (check here if you missed it)

The first one has glossy green glaze all over, then a bit of satin white on the top edge, causing the drips. 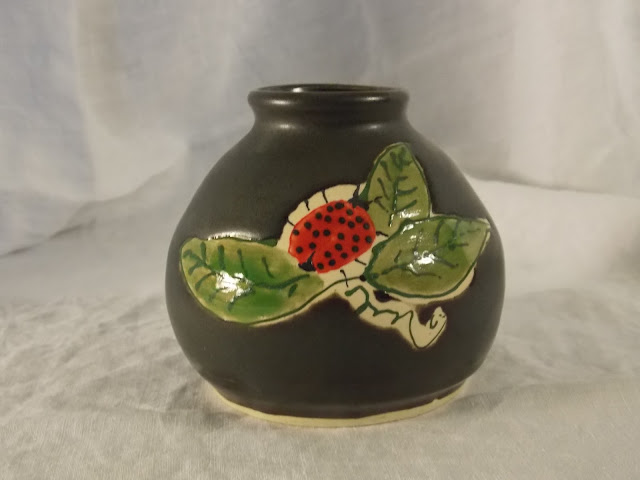 A simple form in matte black would look great with a few spring blooms in it!

And one done with celadon all over, then the top neck dipped into plum...which gives sky blue!

Posted by Barbara Rogers at 1:00 AM 5 comments:

Last Saturday my friend and I visited this show in Hickory, NC for the first time.
And being the kind of potter that I am, I looked for inspiration, as well as learning the techniques of the pottery which I admired.  So my photos are as biased as I can get...just my favorites.

With the usual photographer's disclaimer, I'm leaving out the ones I liked but had fuzzy pictures.

I'll be posting more pottery show displays every week now, as I keep going to them.  They are FUN!

Yes, we asked how she glued the goblets to the bases...good old E-6000. She said she just broke off the stems of glass, and connected these goblets that way.  A potter we enjoyed talking with!

Secrets of the craft are often shared willingly with anyone!

We enjoyed seeing the diversity of decoration by Mr. & Mrs. Eugene.  I carefully found that everything had been hand done, including little logs and trees in some scenic paintings.

More to come!  Much much more!
Posted by Barbara Rogers at 1:00 AM 2 comments:

The glaze is a comination of glossy green first, then satin white appllied over it.
Posted by Barbara Rogers at 1:00 AM 1 comment: 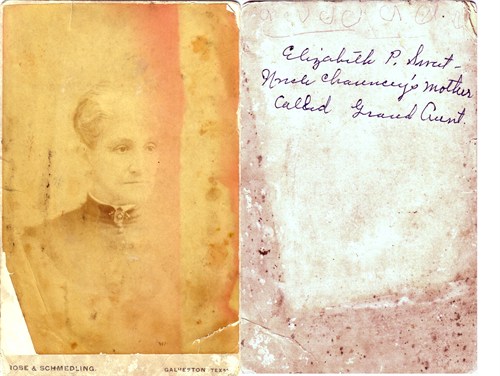 Oh I'm kicking myself.
I haven't tried to enter information about my genealogy for months, maybe years.
So I had 6-7 paragraphs all nicely delineating my Great great aunt Lizzy Sweet (perhaps another great).

And wanted to try to pull up something I'd just deleted.  Ctl-z is the command.  But oops.  It erased the whole posting.  I tried immediately to close it, hoping it hadn't saved the blank screen yet.  Nope.

So I'm not going to do all the work I did before.  There was a great woman who mothered not only her own children, mainly in Galveston TX, as well as her great niece, my grandmother, and during the 1900 storm of the century.

Sept. 8-9, 1900 was the worst storm to hit that island to date.  This was before storms were given names, but it was known by my grandmother Ada Phillips Swasey Rogers and her family as the Storm of 1900.  I've posted about it before (HERE). And a lot of Galveston's history is on this blog HERE,  and Here.

Then I looked over at Ancestry, and got involved in finding out Elizabeth Sweet's husband's parents had recently been entered, including his birth place in Massachusetts.  Lizzy herself was from Newburyport, MA.

And I also got into trying to chase the roots of his uncle, who lived and was one of the main founders of Sabine Pass, TX...and is buried there.

So that's what I spent several hours doing, instead of playing with clay, or cleaning my apartment, or other blog posts.  I did take a break and went to a potluck dinner at the church...and got to talk with some lovely people.

Now I'm going to go unwind some of those Sweets ancestry lines, which believe you me, are a tangled web at this point!  The ones in Connecticut and Massachusetts are my ancestors...it's the ones who went to Texas and fought in the revolution of Texas Independence that I want to get straight, even though they are just uncles and aunts.

Great Aunt Lizzie, aka Grand Aunt, died in Galveston, at the age of 77.   She was survived by her son Chauncey Sweet.

Of course I could also spend a few hours looking at the Granger family tree from Newburyport, MA.  This is such a fun and enveloping endeavor.  If you don't hear from me for a while, just send some food and water...I'm back in the 18th century with ancestors!


What children do to entertain themselves...from a photo over on Sepia Saturday.


The  link here goes over to Sepia Saturday

Most of the things children did when I was growing up didn't include having our pictures taken.  When a camera was brought out in those days, it was usually for an event.

My 3 year old sister was caught in a sunsuit in our Houston backyard.

Summer of 1953 my cousins from Texas visited us where we'd moved to St. Louis.  Whose birthday was it?  I have an August birthday, so probably was celebrating my 11th.  I imagine we were picnicking in Forest Park.  And if you look close you'll see my still favorite box of crackers in the foreground.  In a day before plastic grocery bags, we carried things in paper bags, and that great cake carrier on the lower right corner. 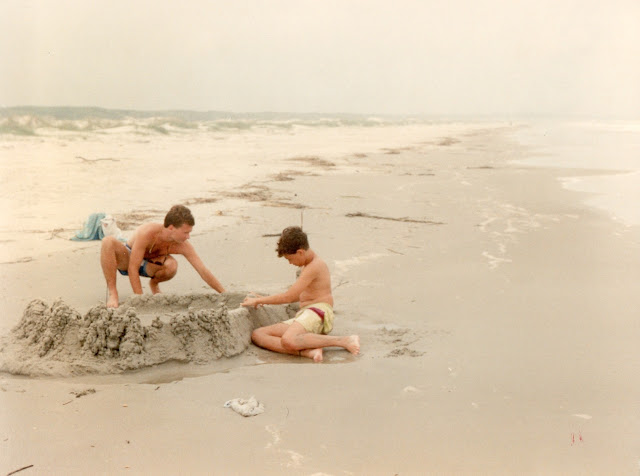 As an adult I made sure my Floridian sons learned some engineering techniques for sand castles.  Here Russ and Tai are at work on Cumberland Island, GA on one of our vacations. 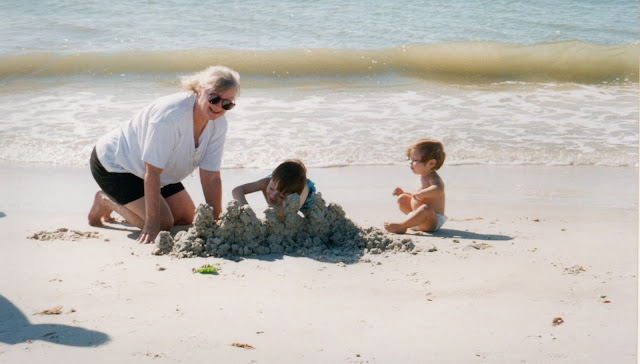 Barb making sure the next generation knows how she makes sand castles.  Grandson William is hard at work, while Cayenne (on right) may have been tasting the seashells.

Hope you have a great day today!

Remember my nuevo primitive vases?  (See this blog post for another example)
Here are a couple from the latest batch. 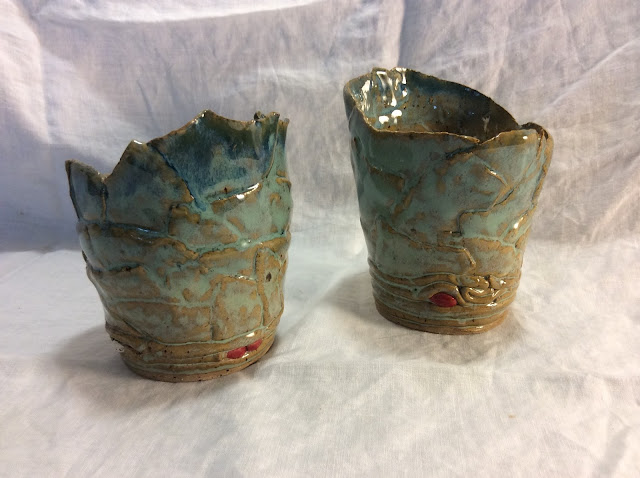 The red is Mayco Stroke and Coat. Which is then waxed when I wax the bottom of the vase.  Dipped once in celadon (studio glaze).  The very top edge is then dipped into plum (studio glaze).

Clay is a recycled mix, primarily speckled brownstone.  All fired cone 5-6.  These today are completely hand crafted without using the extruder for any parts...though I do admit to rolling the pieces of slab through a slab roller!  I make a slab and then tear pieces off of it, and then adhere them to the base, building up of course until the desired height is reached.
Posted by Barbara Rogers at 1:00 AM 2 comments: 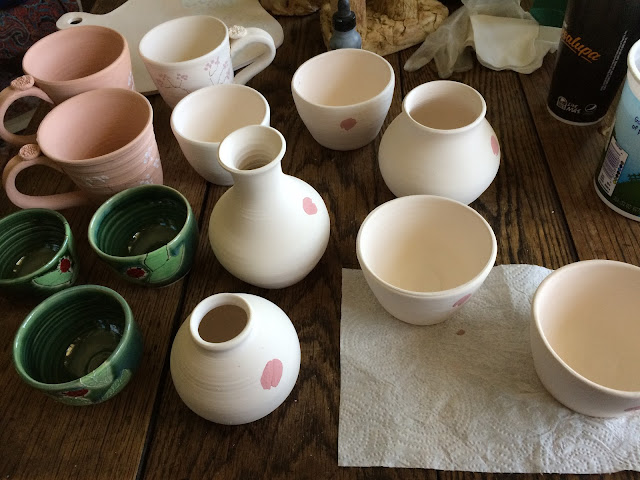 Some mugs with tree blossoms... 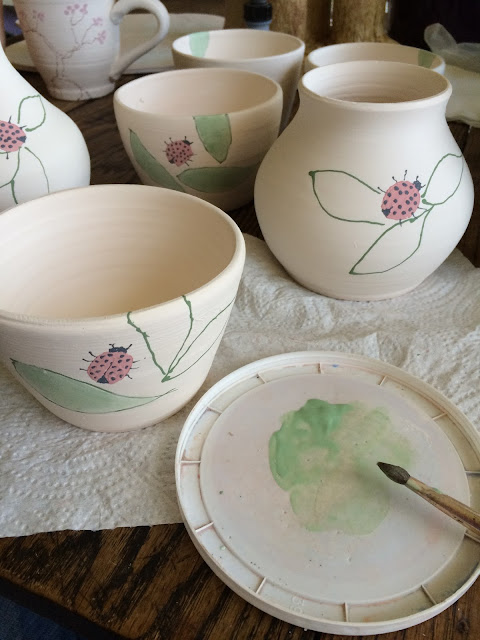 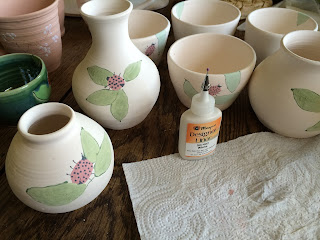 Painting delight on pottery for my friends.

Hope you have a good day!

Fred Feldman was taking me to a free concert...in my dream.  It was being held at a huge outdoor stadium, and we were walking to it from an overlook area by the parking lot. I wore a big floppy straw hat, a hippy skirt, and was barefoot.
Barefoot!

I told Fred he needed to take me back to wherever my shoes were.  Nah.  He plowed ahead and lost me in the crowd.

I figured I'd call him on his cell phone and state my imperative to go get my shoes.  No luck.
So I just stood somewhere or another, trying to not step on anything sharp.

Woke up to the smell of cake baking.

Aren't dreams nice that they can provide such insight into our lives?  I did go with another friend and Fred to a big rally downtown in Asheville, several years ago ...which planted the seed for the dream.

I hope I find out whoever was baking the cake.  And except for football stadiums, I used to go barefoot lots of places where grass grew.
Posted by Barbara Rogers at 1:00 AM 3 comments:

And no, that doesn't make any processed cheese! 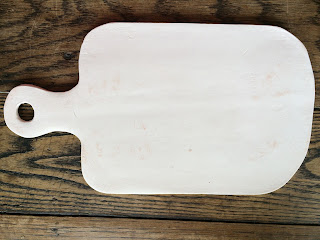 I thought they are rather large for cheese cutting...perhaps some fruit or crackers would also be spread around on these trays.  Here they are bisqued, with just a bit of bend from true flat where handles are.  I was amazed they didn't crack or bend more as large thin slabs are wont to do.

The rather normal shaped one is now waiting to be in a glaze kiln-load.

I just got some shots of my process of painting geraniums on the strange shaped one. I used 3 Stroke & Coat colors, and 3 Designer Liner colors (all by Mayco). 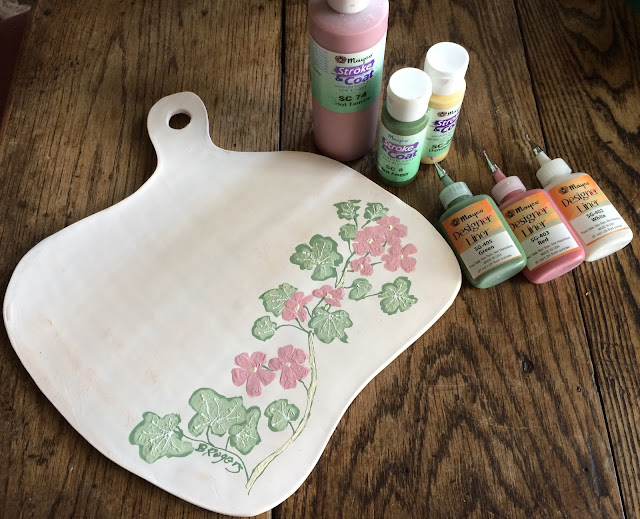 After painting all the color images, I then put a coat of matte clear over them all, and then wax them with a liquid wax.  That way I can next pour any glaze over the whole surface and won't interfere with all that painting.  I'll also wax the edges and back so there won't be glaze on those surfaces either. 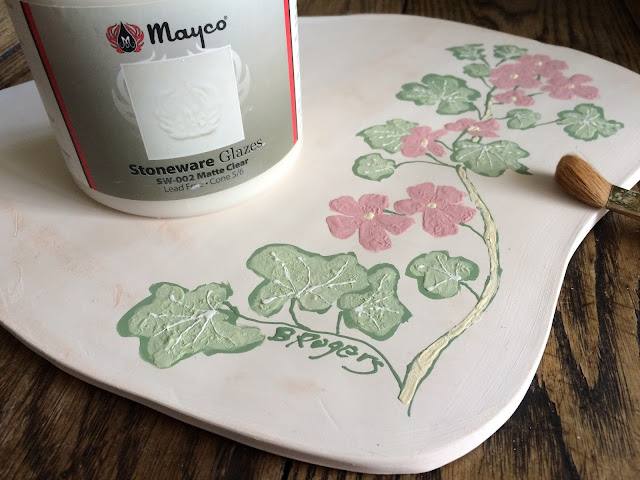 I hope you have a wonderful day!

Posted by Barbara Rogers at 1:00 AM 5 comments: 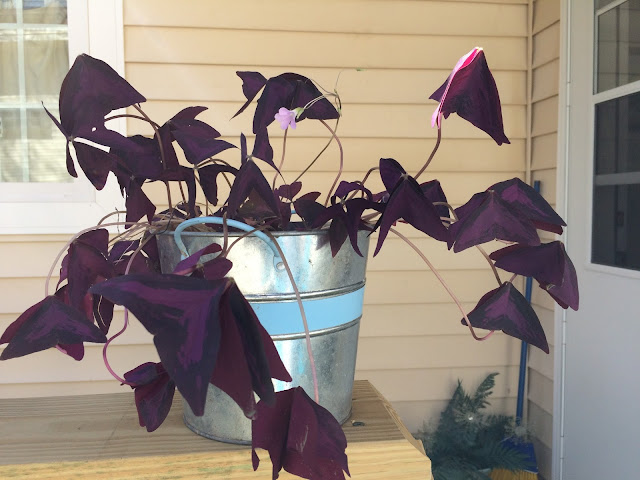 Though the temperature was in the 80's on St. Patty's day, my purple shamrocks closed up like umbrellas in the north wind on my front porch...so you can barely tell their pretty shamrock shaped leaves at all!
They were happy to come back inside...for a month or so! 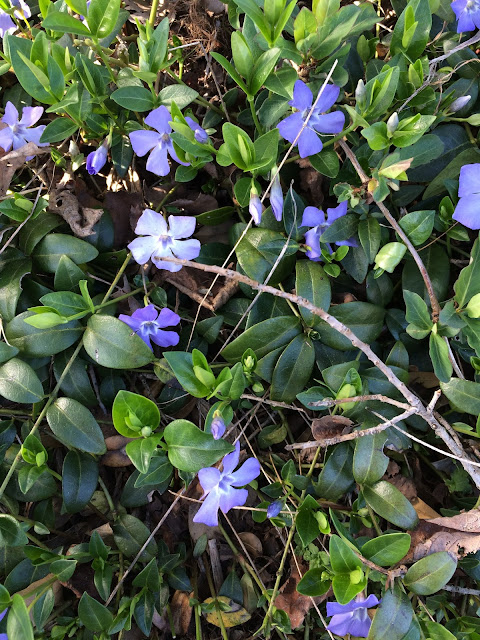 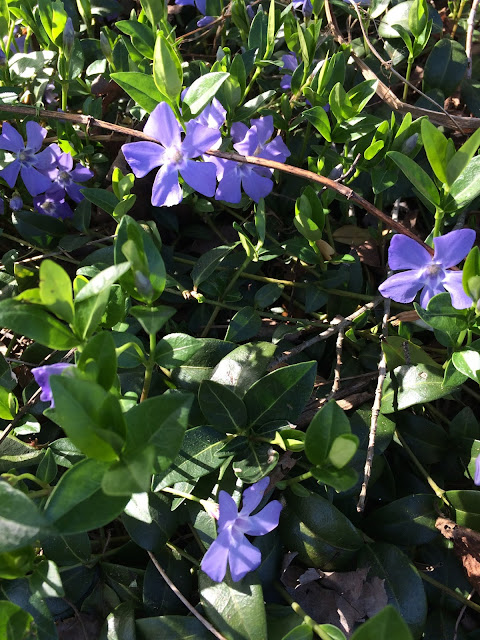 What a pretty bed of blue (Periwinkle?) outside the library.  And since they were in partial shade, they didn't bleach away but remained blue to the camera.  If you know what this ground-cover blue plant is, please let me know! 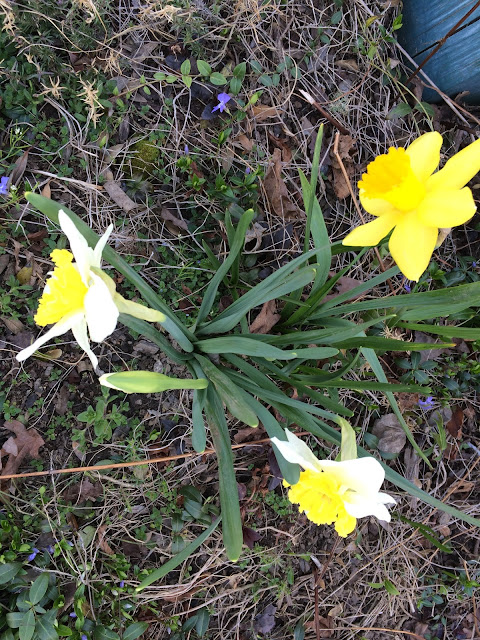 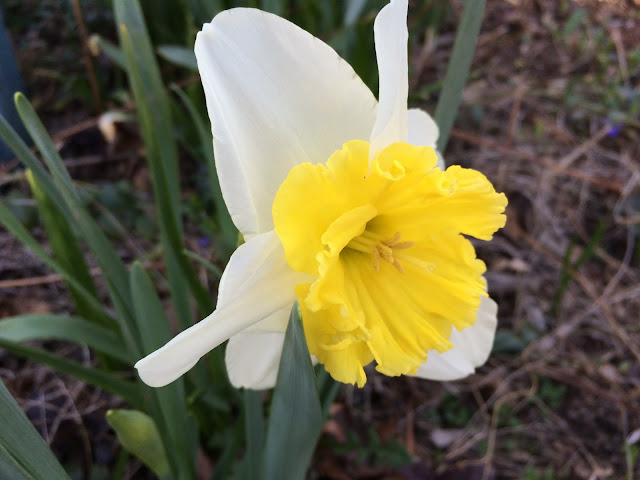 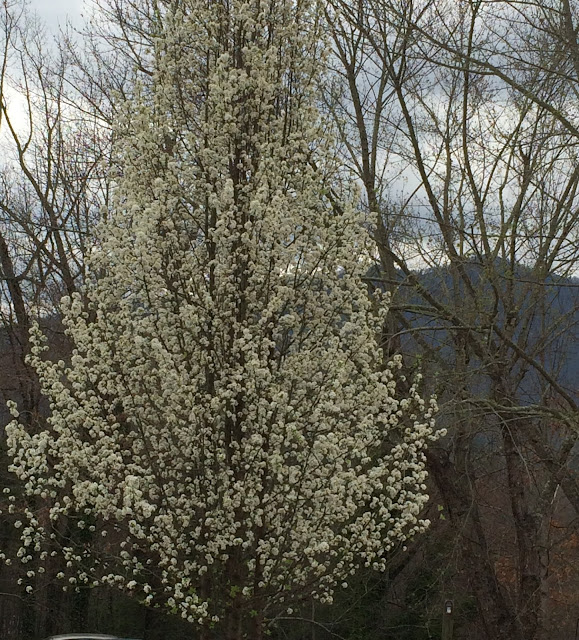 And a beautiful Bradford Pear tree is on the side of our parking lot, already giving beauty to us all.  It will festoon the cars under it with some petals soon as well.  Due to be below freezing tonight and maybe tomorrow night.  I hope it is enjoyed before the blossoms fade.

Posted by Barbara Rogers at 1:00 AM 7 comments: