After spending a summer camping out west in our van, I moved with my two oldest sons from Tampa to Tallahassee, FL in 1975.  Before that, I'd been working in Tampa at an architectural firm as an architectural interior designer on commercial projects, where I met several young architects.

We would meet with other friends and have a pot luck dinner once a week in one of our homes in Tampa, FL.  That's how I met Ken Baxter (on left.)  He and his wife, Joanne, made the macrame that is on display (photo below) at the Winter Park Art Festival.  Yes, macrame was considered an art!  Anyway, after moving to Tallahassee, I met Charlie DeFilippo, (on right in photo) and we drove down to the Winter Park Art Festival and ran into Ken and Joanne.  (Winter Park is near Orlando, FL) 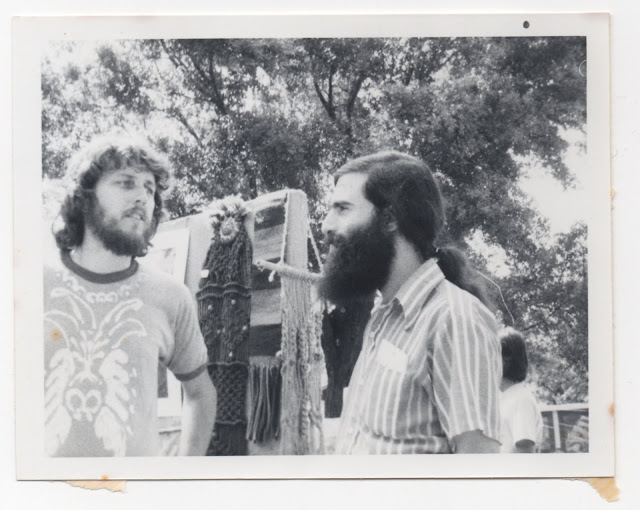 Fast forward to this week in 2017, and I just discovered Charlie now has a facebook site.  Haven't found anything recent on Ken however.

Anyway, Charlie taught me several things, Tai Chi and pottery making.  We partnered up with another friend in a business venture, "Pottery, Poetry and Person."  I gave about a year to managing this co-op store featuring "pottery, books, and other crafts," while learning more about making pots.  My friend,  Martha Curie was the source of the New Age books portion of the store.  I'm happy to have stayed in touch with her over 40 years.

I think I still have one plate which I made and carved in a Mimbres design at that time.

Ken introduced me to his guru, Amrit Desai, who did Kripalu Yoga, in which you move from one pose to another in a flowing style.  I went to several of his workshops and greatly enjoyed the meditative yoga movement.

After I moved to Tallahassee, Ken asked to to help bring Amrit Desai to speak in Tallahassee the first time.

Charlie and I were partnered in a relationship also for several years until he moved to New Mexico and I didn't see him again.  I think highly of him still, and hope he is well.

I'm adding this photo, and bit of my biography, to Sepia Saturday this week. (There are various bloggers who list their names at the bottom of that page, in case you want to see more!)

My photo of these men who influenced me may have been taken just as they were first meeting. They are actually looking at each other, and if you think about it, how often do you see that in conversational photos?

Posted by Barbara Rogers at 6:37 PM