Safety in firing kilns for clay and glazing

Any potter must use kilns which fire to very high glass-melting temperatures.  Electric and gas kilns are used frequently, but also wood firing kilns are used...as well as pit firings and raku firing.  I've been involved in all of them, but am just a participant, not the main person who knows all the ins and outs. 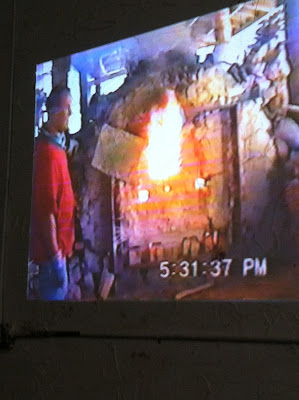 But most potters don't fire their wood-burning kiln every day.  More likely every other month...or perhaps once a quarter, or even once a year.  These kilns are huge, usually long with pots packed in very tightly.  Then there's a fire box, and various bag-walls of fire bricks that channel the heat back and forth throughout the chamber before it finally goes up the smoke stack.  The design of the kiln is quite interesting, and usually is based upon one that has existed for centuries and been fired successfully.

For Sepia Saturday this week, we get prompted to consider safety and blast furnaces.

This is a chart of the temperatures for clay and glazes, with cone numbers which are what are used to designate the firing range.

Our studio fires bisqueware (the first kiln firing) at cone 05 - 06 or 1855 - 1911 degrees Fahrenheit.  This takes our clays to a solid state akin to what your regular red flower pot is like...it's still porous, but hard enough to be handled without easily breaking.

On the following chart the "What Happens to Clay" column is a bit different for the clay bodies we use, all purchased at Highwater Clays in Asheville, NC.  We work with mid-range clays which mature at cone 6, or 2269 degrees Fahrenheit.  There is a porcelanous white clay, as well as a stoneware-like clay, which provide different colorations with throwing or hand building.  All our glazes will fit these clay bodies, and also mature at cone 6...and we don't use any lead glazes in the studio.

Our studio only fires to these two temperatures, not doing any custom work with low firing or luster glazing (cone 012 - 09).

The electric kilns in our community studio at Black Mountain Center for the Arts are computerized, so we don't have to look through peep holes to see when the cones have bent over, showing what the temperature actually is.  When firing in a wood kiln, the cones tell you the tale.  So those colors of the fire will also be letting the practiced potter know how hot it is in there.

When I was a clay chemistry student at the University of Florida in the 80s, I worked with various chemistry formulas to develop a clay body which could mature at cone 6 or mid-range.  They had been firing at cone 9, a high-fire clay, and wanted to become more energy efficient. My clay body was pretty, and seemed to be vitrified (hardened) but after using my bowls for a few months, they started to crumble.  A lesson learned.  This was a major effort done by many universities (and commercial ventures of course), and now most students in community studios also are firing at cone 6.

There are many chemicals that exist in clay...it's not just mud.  And the amount of each chemical lends specific characteristics.  So relying upon a commercial outfit to mix up a great batch of a certain clay gives us the freedom to choose the characteristics we want to work with...and not have to measure out all the chemicals ourselves.

For safety in firing the kilns at BMCA, we follow certain procedures.  First only certain assistants can open and empty the kilns after they start cooling.  The firing's usually take around 12 hours, and 12 hours of cooling before they can be emptied.  Our Studio Manager is the only one doing the loading of the 2 kilns, which is good because he is pretty impartial about whose pots are loaded, basing his decisions on sizes of pots that are waiting to fire, as well as how long they'e been waiting...in order to make a full kiln load.

The kiln room is contained completely within concrete block walls, with a concrete ceiling within the whole studio, behind a metal fire door, so it's basically a fire-proof room.  It has one vent with a fan which pulls air and chemicals from the kilns as they are released during firing...venting to the outside.  Another fan cools off the controls of the kilns, so the computers can work properly.

As one of the volunteer assistants, I've learned how wearing the heavy leather gloves help while emptying a kiln which is still around 200 degrees hot.  That's cool enough for a pot to come into the room, but still a bit too warm for finger touch.

I am pretty disorganized this week, and can't locate photos of a raku firing, nor those of a pit firing.  These are both done outside, and don't use cones to finish up the firing.

OK, that's my pottery sharing for this Sepia Saturday.  I wonder what the rest of the Sepians are talking about over HERE.

Posted by Barbara Rogers at 9:05 PM