The blues on pots

Yes, I don't make everything with a butterfly or ladybug.
Or purple.

But while starting a line of blue things, I did play with some monarchs.  Just forgot to take most of their pictures, except the big green mugs.

Some little blue plates just went away in a flash.  Guess I planned that at $20 per.  Next batch will be a bit more expensive, I'm thinking.  The painting of bugs does take extra time after all, rather than just dunking the plate into a glaze or two.

I not only paint a bug and some leaves (usually 4 glaze colors) then I coat them with clear glaze, then wax over the whole thing when it's dried, then do the rest of the plate.  That's definitely a few extra steps.

Well, I thought I'd taken some photos of the blue mugs as well as the purple ones.  But they fell into the pit of never-again-to-be-found-no-matter-where-you-thought-you-saved-them.

Must be a monster blue thing!

However, they were bundled into a tub to be shown at the Black Mountain Tailgate Market again, yesterday...so I hopped over to see them before they sold right out from under me.  Ha!  This is one pretty smart potter, who is notably absent-minded! 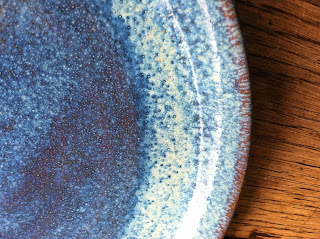 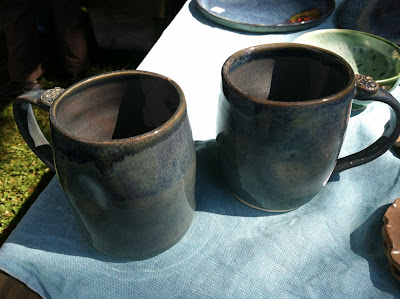 Grey-blue with darker blue rims, with indents on each side, Celtic cross thumb knob.  $20 each
Posted by Barbara Rogers at 1:30 AM