And some more historic documentation-(Note, editor, Barbara Rogers, is now making her comments in italics to help differentiate the voices/quotes posted here.)

Sir John Fitz Roger, the second [English] generation, was born 1386-7. He married Agnes de Mercaunt of Seamer, Suffolk Co. in 1406 when he was just past the age of 19. He was the manager of the vast Furneaux estates and bought 'Benham-Valence' and other properties in Berkshire and Dorset. He received a Knighthood through recognition of military service performed. He was one of the wealthiest people in his section of England. He and Agnes had two sons, John and Thomas. He died 4 October 1441 at his home at Bryanstone. He is buried at St. Martin's Church there. His will was dated 21 September and proved 10 November 1441 and it was at this time the 'Fitz' to the Roger name was dropped and ultimately a terminal 's' added
Source: "Lineage of Rogers Family", Underwood, published in NY in 1911.
----------------------------------------------------- 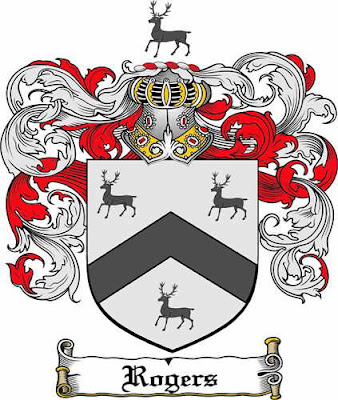 Rogers Family
ROGERS ARMS: Argent, a chevron between three stags sable, attired or.
CREST: A stag trippant sable, bezantee, ducally gorged and attired or.
MOTTO: Nil conscire sibi  - To have a conscience free from guilt
Source of the following is:

[a review of much of the history we've covered in the last week.]
The Rogers Family: Sir Tancred de Hautville, born c970. died aft 1058, a nobleman of Hautville near Cautauces, Normandy, m. firstly c992 Moriella; m. secondly c1013 Fredistand. There among their sons were Robert, Roger and William.  Robert "Guiscard" born 1015, became a great General, commanding Norman troops in Italy, and was created Duke of Apulia 1059; King of Naples and had other honors, and died in 1085.  His brother Roger became Grand Count Roger I 1089-1102 of Sicily. He was born 1030 and died in 1101/2. Duke Robert and his brother Grand Count Roger were largely responsible for the Norman conquest of Sicily, and the FitzRoger name in South West England is said to have arose (sic) from descendants of these brothers. Religious upheaval in Sicily forced Aaron Fitz Rogers, a merchant of Rome, to flee to London where he engaged in business. The Rogers Family were given the right to bear the coat of arms accredited to Grand Count Roger I of Sicily.

[editors note: Aaron FitzRoger has also been given a different birthdate from other sources...1249.]

2. John FitzRoger b. 1335 m. Elizabeth de Furneaux b. 1330 daughter and heir of Sir Symon de Furneaux of Ashington, and other manors in Somersetshire and Devonshire and Alice de Umfraville, widow of Sir John Blount, Constable of the Tower of London.  John FitzRoger was her second husband.  John was their only son and heir.  John [father] gained great wealth by marrying Elizabeth. With John FitzRoger she was co-founder of 'Rogers House' of South West England.  Sir Symon's only surviving child, and sole heiress, was his daughter, Elizabeth de Furneaux b. c1334. She m. 1351, Sir Blount, Knight and a Constable of the Tower, by whom she had Alice later that year in 1351. Sir  Blount d. 1358, leaving an attractive and wealthy widow, who inherited many large estates. 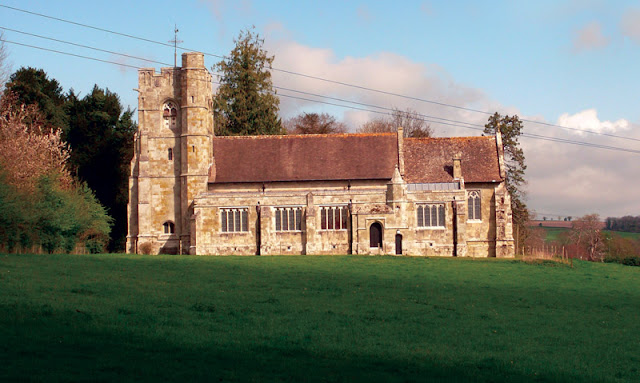 Posted by Barbara Rogers at 1:00 AM